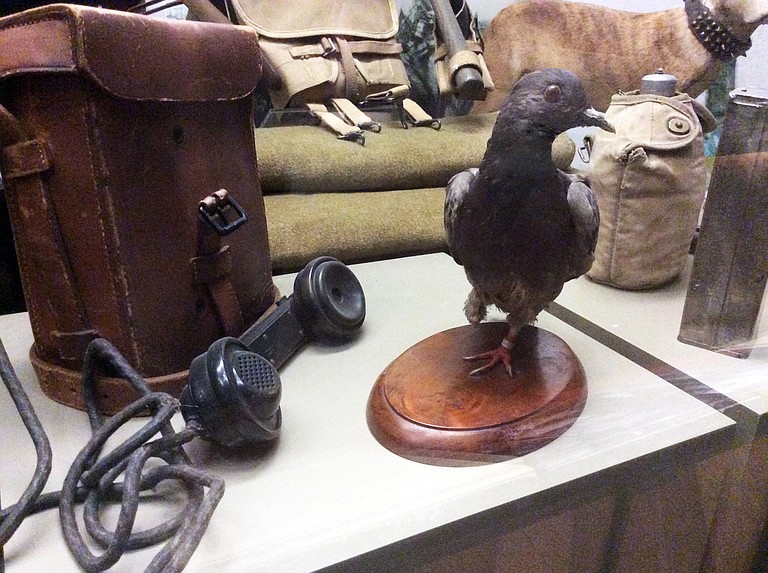 Cher Ami is the pigeon that crossed enemy lines to deliver a message from the Lost Battalion saying that troops from Allied Forces, who did not know their location, had begun to shoot at them. The bird's body is on display at the Smithsonian Institution. Richard Coupe

FRANCE—Oct. 8, 2018, was the 100th anniversary of the relief of “The Lost Battalion.” Some 550 American soldiers fighting in the heavily forested and rough terrain of the Argonne Forest in northeast France had become isolated, and German forces surrounded them. Trapped in thick woods and out of ammunition, food, water and medical supplies, they refused to surrender, even when the Germans begged them to do so. At one point, the Germans captured a messenger and then sent him to American forces with a note that read, “The suffering of your wounded men can be heard over here in German lines, and we are appealing to your humane sentiments to stop.” Only 194 were rescued.

The stuff of legends! There are many books and movies about the six days of hell the battalion endured. In 2016, the Swedish heavy metal band Sabaton even released a song called “The Lost Battalion” commentating the event. The pigeon, Cher Ami, shot through the breast, blinded in one eye and with a leg hanging by a thread, made it through enemy lines to deliver the message that we were shelling our own troops. She is now on display in the Smithsonian Institution. The commander, Major Charles Whittlesey, received the Medal of Honor but committed suicide a few years later.

One hundred years ago, inexperienced Americans were dying in the thousands in the fields of France. The French and British armies were exhausted after four years of heavy combat, and it fell to the newly arrived and inexperienced Americans to supply the men willing to fight. In a few weeks, it was over, the end of World War I, the armistice signed on Nov. 11, 1918. But the “war to end all wars,” was just a beginning. In hindsight, we now know that the 20 million dead in WWI was just a short breather until 70 million died in World War II.

This past summer, my 15-year-old daughter and I took a driving tour of many of these battlefields. We went to the Montfaucon American Monument, the largest American war memorial in Europe. We saw the huge pyramid-like monument Aux Morts des Armées de Champagne, within which lie the bones of 10,000 dead. On top of the pyramid are three large figures, one of which has the likeness of Quentin Roosevelt, the youngest son of President Theodore Roosevelt killed during WWI. We walked the ruins of Cumières-le-Mort-Homme, a village that “died for France” and found unexploded artillery shells 100 years after they were used.

We visited many museums such as Cloth Hall, in Ypres, France, that graphically displays the horrors of trench warfare. We peeked in the windows of the Verdun Ossuary, where the bones of 130,000 men lie stacked in heaps in the basement. The line “The blood of the martyrs will water the meadows of France” from “Les Misérables” has new meaning for me. What I saw, coupled to the revelation that there was no point to WWI, that the whole world was driven to war by nationalism and an excess of hubris, and that the vengeance of the Allied leaders exacted against the Axis powers led directly to WWII, left me profoundly sad for the human race.

In the small village of Romagne-sous-Montfaucon, France, near Verdun, we had lunch in a small informal museum. The proprietor has been collecting artifacts from local battlefields for over 40 years and the small museum was heaped with the everyday necessities of soldiers: belts, buckles, coins, buttons, religious medals, canteens, shovels, etc. While we were there, a bus load of about 14 American journalists arrived for lunch and a tour and as the talked I was aghast at how little they knew of WWI.

Freelance writer Richard Coupe, who recently returned from living in France, is a scientist, occasional writer, soccer referee and once more, against all odds, the owner of a house that needs much work.