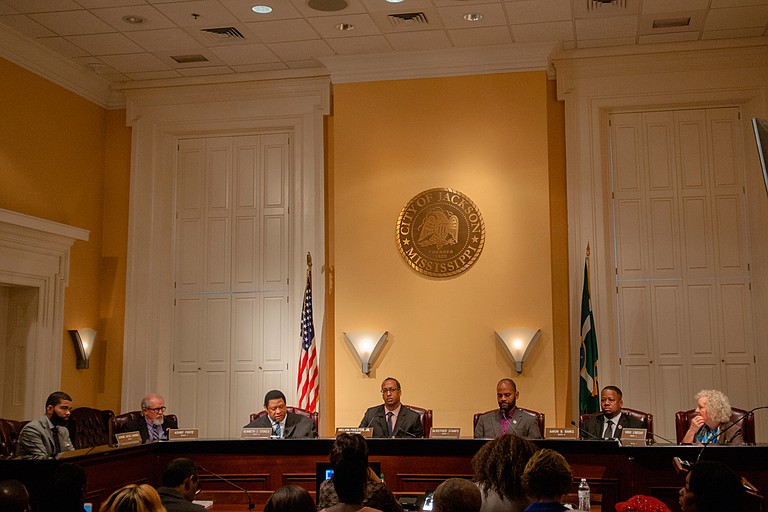 The Jackson City Council convened March 7, 2018, in a special meeting that took the place of next week's. They are pictured here in a file photo. Photo by Stephen Wilson.

JACKSON — A Jackson elementary school has to wait for new sidewalks because the City of Jackson has to restart a bid process for funding under the federal Safe Routes to School program. The delay comes because the Office of the City Clerk did not advertise the project in a newspaper with statewide distribution, a requirement for federally funded projects.

The Jackson City Council met Wednesday to take the place of next week's regularly scheduled meeting.

In a January memo to the mayor, Public Works Director Bob Miller said the project would reconstruct "old dilapidated sidewalks" and create crosswalks that are compliant with the Americans with Disabilities Act. On Feb. 21, the council approved Simmons Erosion Control of Lake, Miss., to do the project for an amount of $651,207.

With funding from a master lease purchase agreement, the City is reimbursing itself to purchase two dump trucks, a pothole machine, a machine for painting lines, and other equipment not to exceed $942,000. A February memo to the mayor from Charles Hatcher, director of the Department of Administration, said this money was included in the 2018 budget.

The council approved an application to the Mississippi Department of Archives and History to enter phase two for Jackson's Midtown neighborhood to someday be on the National Register of Historic Places, alongside others in Jackson such as Poindexter Park, Farish Street and Medgar Evers Historic District. MDAH will cover $12,500 for second-phase surveying with a total cost of $25,269.

Mount Olive Cemetery, also among Jackson locales on the national register. On Wednesday, the council voted to apply for and accept a local-government grant from MDAH to create printing and marketing materials for a campaign to encourage donations so more work and maintenance can be done at the historic cemetery. The Jackson Historic Preservation Commission and the Department of Planning and Development recommended the City apply for a $10,000 grant from MDAH, and Jackson State University is slated to match that grant to cover the costs of the $20,000 project.

Buried in Mount. Olive, which dates back to 1807, are notable Mississippians such as Ida Revels Redmond, an organizer around women's self-improvement and social services for youth, voter-registration drives and solutions to other inequities. She was the daughter of Hiram Revels who was the first African American to serve in the U.S. Congress from Mississippi, in 1870 and 1871. Redmond's statute along with one of James (Jim) Hill, a former slave who was elected during Reconstruction as Mississippi's secretary of state from 1874 until 1878, were restored and unveiled in November 2017.

To satisfy a requirement with the U.S. Department of Housing and Urban Development, the City is required to allocate funding for public-service organizations to use Emergency Solution Grant Funds from 2017. Just over $46,000 will go to Hinds County Human Resource Agency and Mississippi United to End Homelessness, respectively. Christians in Action,Matt's House at Stewpot, and the Mississippi Center for Police and Sheriffs will each receive just over $16,000, respectively.

Through different 2017 Community Development Block Grant Funds from HUD, the City executed various contracts with different nonprofit organizations to implement public-service programs for a total of $196,715. The money will be spread across organizations including Operation Shoestring, Catholic Charities and Stewpot's after-school program.

In November 2017, the council approved a "workout plan" between the City and HUD to settle a $7-million debt. The City is now required to conduct a feasibility and market analysis of the downtown area, develop a concept plan, hire a private developer and construct the selected project by April 2022.