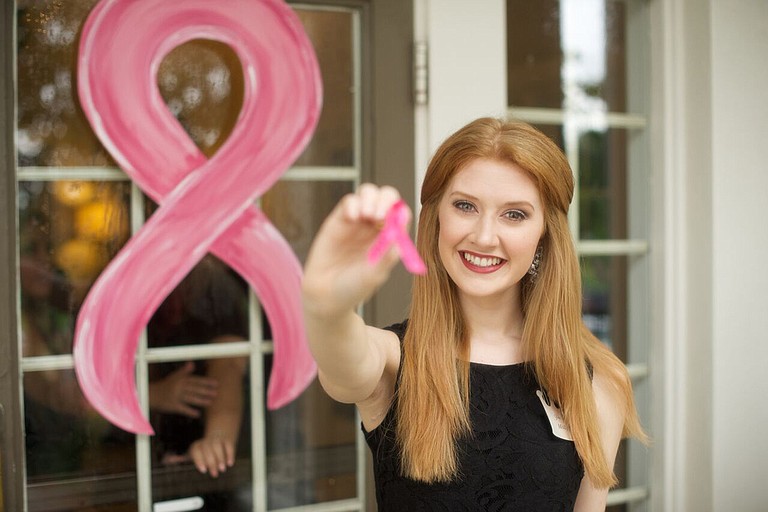 In Molly May's 23 years of life, she has had to overcome obstacles that most people her age probably did not think could happen to someone so young.

When she was just 8 years old, her mom, Debra May, was diagnosed with breast cancer. She says watching her only parent go through something as severe as breast cancer was a life-changing experience for her.

"I would go to school and sit in my classroom crying because I thought she would have passed away by the time I got home, but thankfully, she never did," May says. "She had chemotherapy and two single mastectomies, and she is now a 15-year survivor. We are so proud of her."

When May was 19, she found out that she was BRCA-1 (breast cancer 1) gene positive and that she had a radial scar (a lesion in the breast that mimics breast cancer on a mammogram). As a result, she had to get a double mastectomy.

"Now I spend my time devoted to being an advocate for the community because a lot of people look at breast cancer and think it's an old woman disease, and unfortunately it's just not anymore," she says. "I spend my time helping and advocating, and working with different fundraising groups, and I'm now in the process of writing my first book."

"My hope for the book is that it spreads awareness and becomes a symbol of hope for someone who is reading it and going through a similar situation, and even if they're not, that they can use it to overcome any hardship in their life," she says.

May says her biggest dream at the moment is to win the Miss America pageant.

"My mom put me in pageants when I was really little, so it has kind of always been a part of me because of her," she says. "I started to compete in the Miss America Organization when I was 17, the year that I competed for Miss Mississippi's Outstanding Teen 2012 and won that."

From there, May went on to compete for Miss America's Outstanding Teen, where she placed in the top five and won the talent portion in 2013. May says ranking in the top five motivated her to continue competing on a national level.

She won second-runner-up her second year, and placed in the top 10 and took home the preliminary talent in her third time entering the competition. This year, she will compete as Miss Amory in the 2018 Miss Mississippi Pageant at the Vicksburg Convention Center in June.

She is currently an assistant store manager at White House Black Market at the Outlets of Mississippi (200 Bass Pro Drive, Pearl), but she hopes to eventually help with the public-relations sector of a nonprofit organization and work directly with people, as opposed to a company.

May says that even though it has been hard for her battling with insecurities, she remains positive and wants to help others feel comfortable within their own skin, as well.