JPS Bond Vote: 'It's So Integral to the Success of Every One of Us Students' 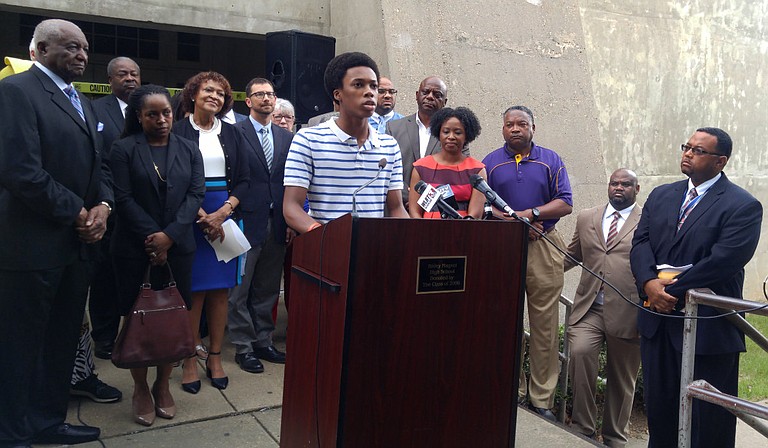 JACKSON — A previous version of this story misspelled Joseph Jiles' name as "Giles." We apologize for the error.

"Our students and families know, as our teachers and staff who work every day in our schools know, that too many of our current facilities teach nothing but despair," JPS Board of Trustees President Jeanne Hairston said. "Let us pull together, Jackson, and tomorrow let us vote strong together to provide safe and accessible 21st Century schools for all of our children."

If passed, the $65 million bond will provide funding for building repairs to all 56 buildings in the district. The district needs to do $15 million worth of repairs to avoid a state takeover, the Jackson Free Press previously reported.

JPS student Joseph Jiles, who is an athlete and JROTC battalion commander, said at the press conference that the referendum is about giving students a chance and a better education.

"Right now I'm asking you, 'What do you care about?'" Jiles said. "This must pass, not because we will it to and not because we want it to, but because it's so integral to the success of every one of us students."

The board established an oversight committee to monitor and provide information to community members as JPS spends the bond money.

"We are committed as a board to transparency," board Vice President Edward Sivak Jr. said. "We are proactively taking this issue on. We passed a resolution that would create the Citizen's Oversight Committee to track the construction, expenditure of these bond funds and public meetings at regular intervals to make sure we do what we say we're going to do."

Polls are open from 7 a.m. to 7 p.m. on Tuesday, Aug. 7. Voters in Precinct 98, which includes Tougaloo College and Jackson 1, Griffith Memorial Baptist Church, are not affiliated with the JPS district and are not part of the election, a press release from the City of Jackson said.