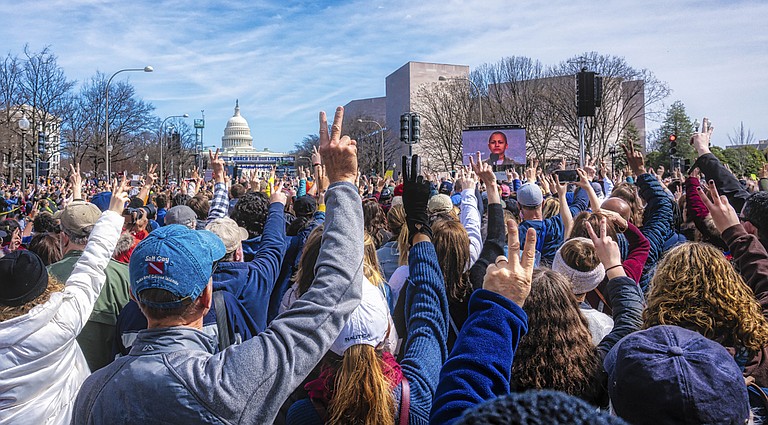 It gladdened my heart when I saw young people—including students of mine like Jaz Brisack—marching and demanding an end to politically sanctioned gun lawlessness in the recent "March for Our Lives" in Washington, D.C., Jackson, Oxford and across the nation. Photo: https://bit.ly/2H4IoNX

OXFORD—Writer and champion of social justice Dorothy Day once said that "fighting for a cause is part of the zest of life. ... What we need is a revolution. Each one of us can help start it."

I remember doing a lot of "fighting for a cause" in my salad days—and later. I shouted, chanted, carried signs, sat in, demanded, wrote letters, and argued and plotted endlessly into the night with my fellow "revolutionaries"—whether the cause was civil rights, Vietnam or workers' rights.

That's why it gladdened my heart when I saw young people—including students of mine like Jaz Brisack—marching and demanding an end to politically sanctioned gun lawlessness in the recent "March for Our Lives" in Washington, D.C., Jackson, Oxford and across the nation.

"We're not children anymore. We're warriors," 16-year-old Oxford High School junior Anna Claire Franklin told the University of Mississippi's Daily Mississippian. The students are "letting our lawmakers on a state and national level know that the upcoming generations ... won't stand by and allow the ease of buying firearms to be prioritized over the safety of our nation's students," she said.

The protests have led to greater gun restrictions in Florida, where the deaths of 17 young people at Marjory Stoneman Douglas High School in Parkland on Feb. 14 prompted outrage against the National Rifle Association's political bullying.

Also tickling this old revolutionary's heart are the massive protests from school teachers in West Virginia and Kentucky that have challenged the Koch Brothers and American Legislative Exchange Council-led effort to destroy public education by starving it of funds so that privately run charter schools can take its place.

That nine-day wildcat West Virginia teachers strike forced the state's governor and legislature to cough up a 5-percent pay hike for all state employees, although the politicians planted enough poison in the deal to make sure teachers get blamed for cutbacks in Medicaid and other services.

Kentucky teachers followed suit this month, marching out of their classrooms en masse after state GOP political leaders proposed cutting their benefits. Under pressure, the Republicans dropped their plan, although some cuts still loom.

Mississippi school teachers are the lowest paid in the nation. A teacher in New York typically makes $37,000 more in annual wages than a teacher in this state. In Mississippi, 13 percent of school teachers have to have second jobs to make ends meet. Republican leadership, like their counterparts in Kentucky and West Virginia, get their cues from the Koch Brothers and ALEC on public education, just as they do on a host of other issues. They'll never admit it, but the end of public education is their goal.

So should Mississippi teachers go on strike? In 1985, thousands of teachers across the state marched on Jackson during the 11-week strike, and they finally got the Legislature to agree to a $4,400-over-three-years pay increase. However, it came with a provision that they would never strike again. If they do, they could lose their licenses, and their teacher organizations could face fines of up to $20,000 a day. But, you know, those teachers in West Virginia and Kentucky faced risks, too, just as students protesting against NRA gun lawlessness have already come under attack from right-wing political groups.

When people get fed up enough to go to the streets, they take risks. They know there may "be a price to pay," Dorothy Day wrote, "sometimes a heartbreaking price. ... Neither revolutions nor faith is won without keen suffering."

Joe Atkins is a veteran journalist, columnist, and professor of journalism at the University of Mississippi.