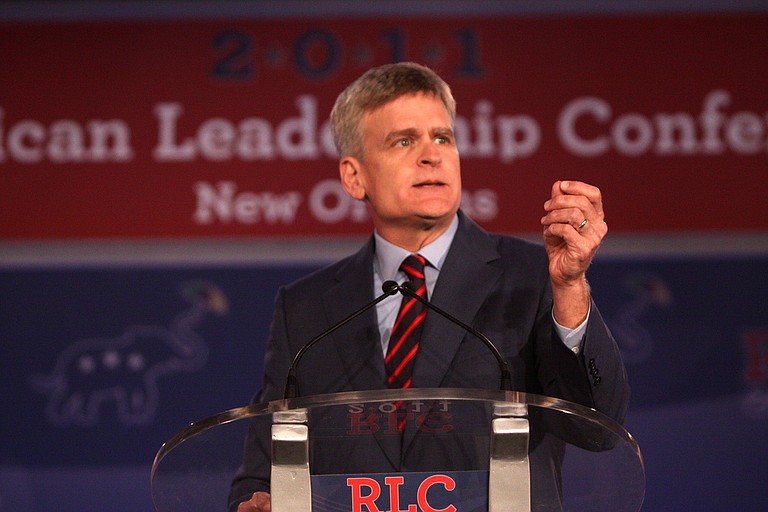 Sen. Bill Cassidy (pictured) defended his health care bill Wednesday after late-night TV host Jimmy Kimmel accused the Louisiana Republican of lying to him about it, heightening the tension around the last-ditch GOP effort to make good on years of promises to repeal "Obamacare."

WASHINGTON (AP) — Sen. Bill Cassidy defended his health care bill Wednesday after late-night TV host Jimmy Kimmel accused the Louisiana Republican of lying to him about it, heightening the tension around the last-ditch GOP effort to make good on years of promises to repeal "Obamacare."

"I am sorry he does not understand," Cassidy said of Kimmel on CNN, arguing that his bill would in fact protect people with pre-existing conditions, a claim that Kimmel as well as leading health advocacy groups dispute. "I think the price will actually be lower."

"This guy Bill Cassidy just lied right to my face," Kimmel said on his ABC show Tuesday night, referring to Cassidy's promises to Kimmel and others that his health bill would pass the "Jimmy Kimmel test." Cassidy coined the phrase to mean that people with pre-existing conditions would have protections and not face lifetime caps on coverage from insurers.

"We can't let 'em do this, to our children and our senior citizens and our veterans, or to any of us," said Kimmel, who jumped into the heath care debate after his son was born with a congenital heart defect in April.

The back-and-forth between the lawmaker and the entertainer came as President Donald Trump and Senate GOP leaders pushed for votes to pass the legislation by the end of next week. If Senate Republicans don't succeed by Sept. 30, the bill will lose special legislative protections from Democratic filibusters that expire at the end of the fiscal year. With Democrats unanimously opposed, the GOP's years-long quest to repeal and replace Barack Obama's Affordable Care Act would once again collapse, this time perhaps for good.

Trump, who promised repeal and said "it will be so easy" during the election campaign, took to Twitter Wednesday to urge support for the bill, which was co-authored by Sen. Lindsey Graham of South Carolina.

"I hope Republican Senators will vote for Graham-Cassidy and fulfill their promise to Repeal & Replace ObamaCare. Money direct to States!" Trump wrote.

The president also took a shot at GOP Sen. Rand Paul of Kentucky, who has announced his opposition to the bill, arguing it doesn't go far enough in repealing the 2010 health law.

"Rand Paul is a friend of mine but he is such a negative force when it comes to fixing healthcare. Graham-Cassidy Bill is GREAT! Ends Ocare!" Trump wrote.

Underscoring the administration's intense focus on the issue, Vice President Mike Pence stepped out of the U.N. General Assembly gathering in New York on Wednesday to speak with Majority Leader Mitch McConnell about the legislation, according to an administration official who requested anonymity to disclose the private conversation. At the Capitol, McConnell huddled behind closed doors with Cassidy and Graham.

McConnell must win the votes of 50 of the 52 Senate Republicans. That would amount to victory in the 100-member Senate, because Pence would then break the tie. As of Wednesday, McConnell appeared to be at least one or two votes short, with the focus on holdout GOP Sens. John McCain of Arizona and Lisa Murkowski of Alaska, both of whom opposed earlier repeal bills in July. Moderate GOP Sen. Susan Collins was seen as a near certain "no" vote.

Still, McConnell's spokesman David Popp announced that it is the majority leader's "intention" to bring the bill to the floor next week.

Cassidy's legislation would repeal major elements of Obama's law, including the unpopular requirement for Americans to carry health coverage or face penalties, and replaces them with block grants to the states. States would have wide latitude in creating their own health systems and requirements, and would be able to seek waivers from certain mandates including those related to coverage for people with pre-existing conditions.

The bill does say that coverage must remain "adequate and affordable" for those with pre-existing conditions, but since those terms are not defined critics fear that insurers could jack up prices beyond many people's ability to pay.

The AARP and the American Medical Association are among those arguing against the bill, along with a bipartisan group of governors, including Alaska's Bill Walker. New Jersey Gov. Chris Christie, a Trump ally during the campaign, said Wednesday he opposes the bill.

In its letter of opposition, the AMA wrote that the bill "does not take steps toward coverage and access for all Americans, and while insurers are still required to offer coverage to patients with pre-existing conditions, allowing states to get waivers to vary premiums based on health status would allow insurers to charge unaffordable premiums based on those pre-existing conditions."

Cassidy disputed such analyses. "What is being circulated is by those who wish to preserve Obamacare, and they are doing everything they can to discredit the alternative," he said on CNN.

If the bill does pass, Speaker Paul Ryan has committed to pushing it through the House as-is, and straight to the president's desk, according to Graham. After seven years of promises to get rid of Obama's law, Republicans would have finally succeeded. It would be a promise kept to the GOP base, yet one with uncertain and potentially devastating political consequences for the Republican Party given that millions of people would be likely to lose their health coverage and others might have skimpier care.

Democrats made their opposition clear.

The bill's full impacts are difficult to predict because the Congressional Budget Office has not had time to assess it. But senators plan to move forward without a complete CBO analysis, heightening outrage from Democrats.