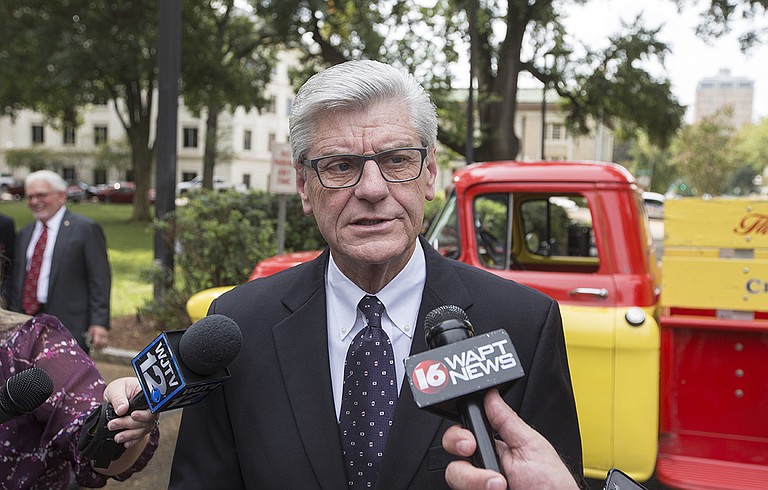 Republican Gov. Phil Bryant signed the law in 2016, but it was blocked for more than a year amid several legal challenges. It took effect Oct. 10, and gay rights advocates immediately started an appeal to the Supreme Court. Photo by Imani Khayyam.

The high court has not said whether it will consider a dispute over the law that lets government workers and private business people cite their own religious beliefs to deny services to lesbian, gay, bisexual or transgender people.

Legal experts say the Mississippi law is the broadest religious-objections measure enacted by any state since the Supreme Court legalized same-sex marriage nationwide in 2015. The law protects three beliefs: that marriage is only between a man and a woman, that sex should only take place in such a marriage and that a person's gender is determined at birth and cannot be altered.

Republican Gov. Phil Bryant signed the law in 2016, but it was blocked for more than a year amid several legal challenges. It took effect Oct. 10, and gay rights advocates immediately started an appeal to the Supreme Court.

Attorneys for Bryant wrote in arguments to the high court Nov. 13 that the law protects people from being penalized for refusing to participate in activities they consider "immoral," such as same-sex marriage.

The 5th U.S. Circuit Court of Appeals, considered one of the most conservative appeals courts in the nation, said in June that people who sued Mississippi to try to block the law had failed to show they would be harmed by it.

The arguments filed Tuesday by attorneys for Lambda Legal Defense and Education Fund, the Mississippi Center for Justice and others were in response to the governor's Nov. 13 filing .

The gay rights advocates wrote that the appeals court ignored a Supreme Court ruling from 2000, which said the Constitution protects against any government policy that has "the purpose and perception of government establishment of religion." The advocates wrote of those who seek to block the law: "They are Mississippi citizens who must live and work in the State knowing that their government endorses specific religious beliefs condemning their lives and relationships, and that it permits government officials and private parties to discriminate against them."

An Arizona-based Christian group, Alliance Defending Freedom, helped write the Mississippi law. The alliance's Kevin Theriot (TAIR-ee-oh) was one of three attorneys who wrote the arguments submitted to the Supreme Court on behalf of Bryant.

"Until recently, there was no need for the law to protect the conscientious scruples of those who oppose same-sex marriage," the attorneys for the governor wrote. "That is because it was unthinkable—until recently—that government officials might coerce private citizens into participating in same-sex marriage ceremonies, or penalize them for their refusal to do so. But state and local governments have been taking action against Christians who decline to participate in these ceremonies on account of their religious beliefs."