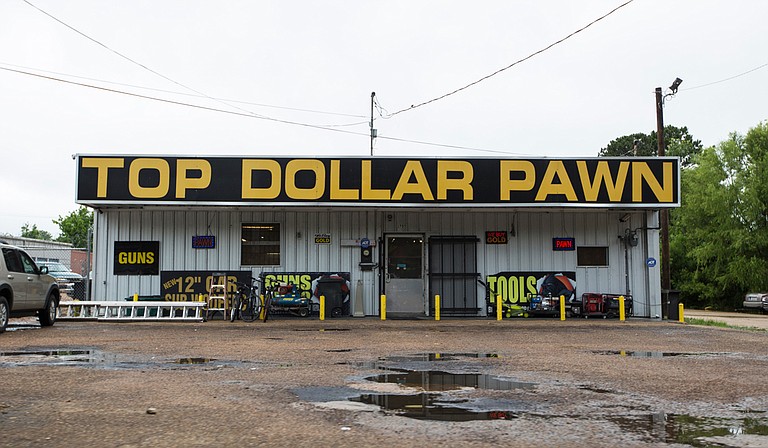 Top Dollar Pawn Shop published on its Facebook account that it is “permanently closed,” but it was still open for business at press time. Photo by Imani Khayyam.

JACKSON — Tramaury Barnes walked into Top Dollar Pawn on West Street at about 10 a.m. on April 24, 2017, to retrieve his AR-12 he had pawned. A Facebook Live video, which Barnes took on his cellphone, shows him interacting with two men there at 10:06 a.m. with one of them hitting him in what looked like a clothesline punch. They refused to accept his ticket for the gun, he says now.

Barnes identifies the man who punched him as the owner of the pawn shop. The video, which went viral, did not capture the entire exchange between Barnes and the men from when he arrived at the store, however. Barnes later claimed that they shot at him as he was leaving, but that is not displayed on the video.

During a visit to Top Dollar Pawn this week, a man identifying himself only as Chuck said he was the owner. He refused to talk about the incident until his lawyer gives him the go-ahead. The other man in the video was in the store, but did not speak to the Jackson Free Press.

Ward 3 Councilman Kenneth Stokes wanted the Jackson City Council to pull the pawn shop's license at its May 16 meeting. "[T]his is one of those issues, Mr. President and members of this body, that we have to take a stand (on)," Stokes told fellow council members and City Attorney Monica Joiner at the meeting.

Joiner, however, encouraged the council to be cautious about voting on the item.

The Choice is Yours

From a legal standpoint, the Mississippi Department of Banking and Consumer Finance regulates pawn brokers in Mississippi under the Mississippi Pawn Brokers Act. Therefore, citizens should report any complaints or violations to the DBCF.

The city attorney emphasized at the council meeting that she was not sure of the proper protocol for responding to the allegations. She stressed repeatedly that the council should find a better route to avoid litigation. "I'm not sure that that's going to be the best way for the council to protect the interests that they are pursuing," said Joiner of a potential lawsuit.

Stokes, however, insisted that the City should suspend the pawn shop's privilege license, which Joiner warned is considered a tax. Ward 4 Councilman De'Keither Stamps seemed to take Stokes' side. "I think as a City we should be able to push our finger on issues and have the full power of a City to the point where business owners would shake in their boots when (citizens) say, 'I'm about to call the City,'" Stamps said, adding that he is not afraid of lawsuits.   "We got these lawsuits for this foolish stuff," Stamps said. "Let's go get some lawsuits for some real matters...."

The body did not approve the measure, however. Stamps and Stokes voted in favor of suspending the license. Ward 1 Councilman Ashby Foote, Ward 2 Councilman Melvin Priester Jr. and Ward 5 Councilman Charles Tillman against it. Outgoing Council President Tyrone Hendrix of Ward 6 abstained.

'It's All Going to Come Out'

"We had three protests there; I don't know the exact date as of now. The first one we had about 70 or 80 people there. We had a lot of community involvement in it. They didn't get any business the days that we were there," Wesley, 50, said.

His organization, Wesley said, "comes out on businesses that's not in the best interest of the community." Wesley attended the council meeting hoping to hear the council vote to suspend the privilege license, but he left unsatisfied. "At first, I was upset about it, but after I did a little more research, I think they may have made the right decision at the time," he said. "Because they were just trying to protect themselves from litigation, but it's not over with."

Wesley said Tramaury Barnes' lawyer, attorney Damon Stevenson had shared with him that Barnes had filed charges, but that Stevenson is not allowing him to speak with the media at the time.

Reached by phone at the Top Dollar Pawn Shop, a man answered the phone, identifying himself only as "Chuck," the owner. "I'm not allowed to speak about it, but just give us time, and it's all going to come out. Thank you for calling me, I really wish I could talk to you about it, I really do," he told the Jackson Free Press.

The information box on the Facebook account for Top Dollar says it is "permanently closed," but it is open and doing business as of press time. Jackson Police Department Chief Lee D. Vance stated at the council meeting on Tuesday evening that the police report "hadn't reached his desk yet," and that no arrests have occurred.