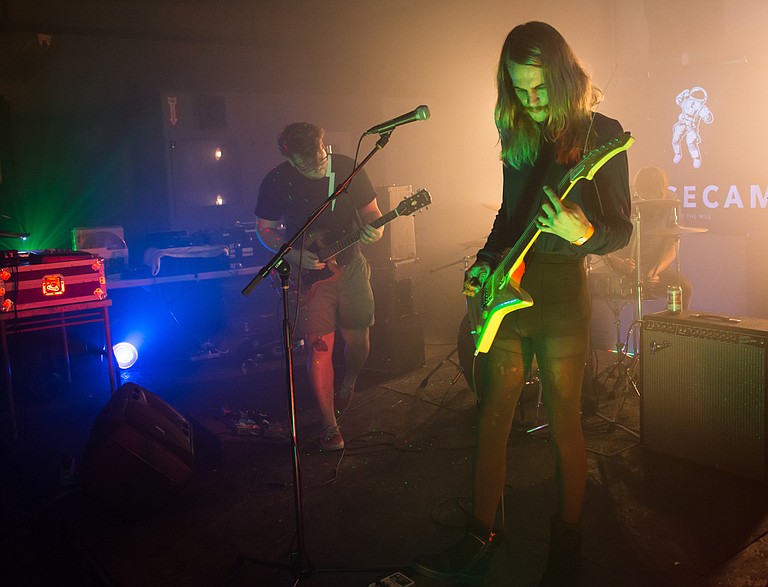 Following an acoustic set, singer-songwriter Alex Fraser hits a distortion pedal and strums bar chords louder than any of his preceding songs. As fog smothers the room at Jackson music venue Spacecamp on May 20, members of garage-rock trio Bad Magic join him for a big, fuzzed-out intermission number.

Bad Magic singer and guitarist Joey Gray says that he, drummer Josh Taylor, and Dream Cult vocalist-guitarist Hayden Boyd established Spacecamp as a home for this level of noise. The owners take advantage of the venue's surroundings—mainly other warehouses and defunct businesses—by playing as loudly as they want.

"We're not trying to make money off people or anything like that," Gray says. "It's about having fun."

Spacecamp hosted its first show Feb. 4, 2017, two months after downtown venue Big Sleepy's closed its doors. Taylor says Big Sleepy's had a strong foothold in the Jackson scene before its closure, but Spacecamp is not necessarily predicated on continuing what the former had established.

"(Big Sleepy's) hosted a little bit of different music than we're all into," he says. "They booked a lot of hardcore and metal shows, and we're not super interested in that, mostly because we're all in these (other) kinds of bands, so we like to have bands on the schedule that like to practice here (in the warehouse space)."

"We're kind of pushing the same idea that Big Sleepy's had—we're just keeping it local with Mississippi bands, but if touring bands hit us up, we book them," Bad Magic guitarist Brett Therlin says.

However, the venue is not exclusively reserved for hard rock. Since opening, Spacecamp has hosted a variety of acts, such as Delta-based electronic artist Argiflex, hip-hop artists 5th Child and Flywalker, and soul-R&B duo Clouds & Crayons.

One of the venue's largest upcoming events is a single-day music festival, Summer Camp, on June 24. The lineup brings together many of the Mississippi-connected acts that have performed at Spacecamp over the past few months, including Bad Magic, Dream Cult, Alex Fraser, May Queen, Bob Chiz, Dumspell, The Tallahatchies, Hartle Road, Ben Ricketts, The Ellie Badge, Him Horrison, Holy Vision, Dream/Window, Reed Smith and Cody Rogers.

Gray says that while Jackson doesn't have the house-show scene of some other towns, Spacecamp hopes to achieve the intimate and receptive feel of that format.

"There's not really anybody who only goes to (rock) shows," he says. "I think a part of that is that there's not a huge scene in Jackson, and some people are just craving anything they can get. You can see bands, have a beer, hang out with your friends, and people usually know someone in the bands and come out to support them."

Taylor says the owners first had the idea of hosting shows in order to help pay rent on the practice space, but despite the initial reasoning, they hold Spacecamp to a high standard in regards to the quality of music and the venue's operation.

"As far as Jackson goes, there's not really many venues for the local scene," he says. "We don't have a business (at Spacecamp), but we want to have a sense of professionalism to it and show that it runs well."

Summer Camp is from noon to midnight on Saturday, June 24, at Spacecamp (3002 N. Mill St.). Admission is $7 in advance and $10 at the door. For more information, find Spacecamp on Facebook.