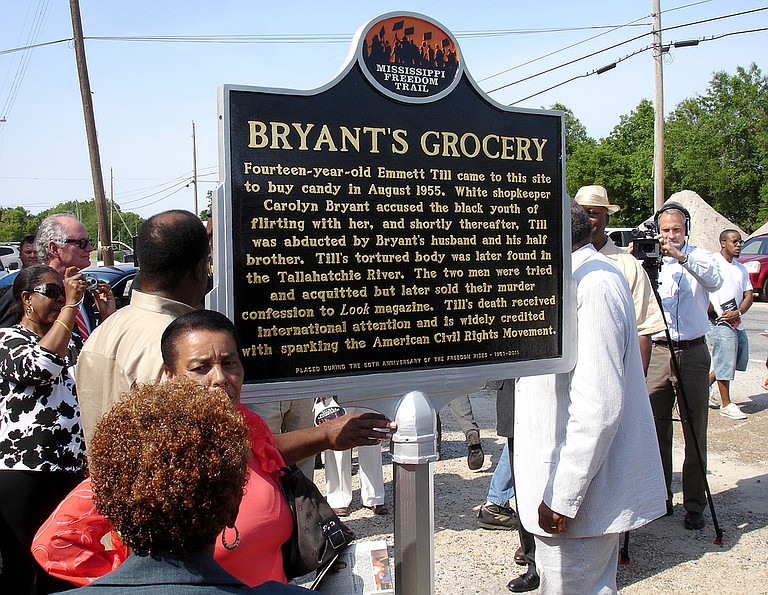 The Till marker was put up in 2011 as the first entry on the Mississippi Freedom Trail, a series of state-funded signs at significant civil rights sites. Photo courtesy Visit Mississippi

JACKSON, Miss. (AP) — A Mississippi historical marker about a notorious lynching that galvanized the civil rights movement was rededicated Tuesday, weeks after it was vandalized and repaired.

The sign commemorates Emmett Till, the black teenager kidnapped and lynched in 1955 after whistling at a white woman working in a grocery store where he and his cousins had gone to buy candy.

The rededication took place on what would have been Till's 76th birthday.

"Love has more power than hate," retired political science professor Leslie Burl McLemore said in remarks prepared for the rededication ceremony. "The quest for freedom will always move forward thanks to the good people, black and white, in Mississippi — in spite of what has happened. People who persist in love, freedom and good will prevail in the long term."

The sign is outside the long-closed Bryant's Grocery & Meat Market in the rural community of Money, about 110 miles (177 kilometers) north of Jackson. That's where 21-year-old white shopkeeper Carolyn Bryant said the 14-year-old Till whistled at her in August 1955. He was kidnapped, tortured and killed because of her accusation.

Till's mother, Mamie Till Mobley, insisted on an open-casket funeral in Chicago to show how her son had been brutalized.

Within weeks, an all-white jury acquitted Bryant's husband, Roy Bryant, and his half brother, J.W. Milam, in the killing, but the two men later confessed in a paid interview with Look magazine

The Till marker was put up in 2011 as the first entry on the Mississippi Freedom Trail, a series of state-funded signs at significant civil rights sites. One side of the sign features a vinyl panel with photographs and text about Till. In May, someone used a blunt tool to put deep scratches into the vinyl. In June, tourists discovered that pieces of the vinyl had been ripped from the sign, obliterating the information.

The state paid about $500 for repairs.

Last year near the Tallahatchie River, another sign commemorating Till's lynching was found to have been shot more than 40 times. It was put up by a private group, and money has been raised to replace it.

Roy and Carolyn Bryant divorced. Roy Bryant and Milam have died. Carolyn Bryant remarried and became Carolyn Donham. She told Timothy B. Tyson, a Duke University research scholar, in 2008 that she had falsely testified, when jurors were outside the courtroom, that Till had physically and verbally threatened her. Tyson first revealed her interview in his book "The Blood of Emmett Till," published this year.