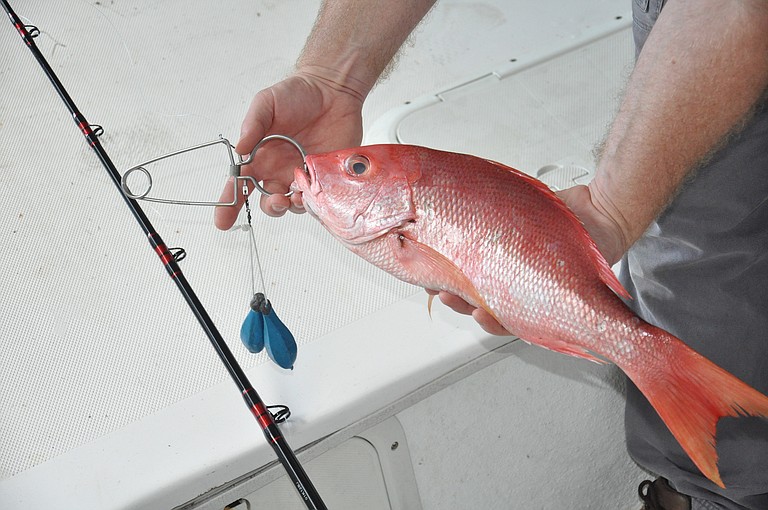 The U.S. Commerce Department has said the economic benefit from allowing weekend fishing this summer by recreational anglers in federal waters outweighs the harm to the red snapper species, which is still recovering from disastrous overfishing. Photo courtesy Flickr/MyFWC

NEW ORLEANS (AP) — Two environmental groups are suing the Trump administration for stretching the red snapper season for recreational anglers in the Gulf of Mexico.

But, he said, "I don't want to return to the bad old days when my dad and I could barely find a red snapper."

Jones and Chris Dorsett of the Ocean Conservancy, said during a conference call with reporters Monday that both groups want their lawsuit to prompt discussions about improvements.

The U.S. Commerce Department did not immediately comment. It has said the economic benefit from allowing weekend fishing this summer by recreational anglers in federal waters outweighs the harm to the red snapper species, which is still recovering from disastrous overfishing.

Gulf state officials had lobbied for and praised the change, but the federal lawsuit filed in Washington says the decision violated several laws by ignoring scientific assessments, promoting overfishing, and failing to follow required procedures.

The prized sport and table fish has rebounded under fishing limits and procedures set by the Gulf of Mexico Fishery Management Council, but is only halfway to its goal, Dorsett and Jones told The Associated Press earlier. The lawsuit isn't trying to cancel the current season but seeks to prevent similar decisions in the future.

State agencies along the Gulf, which were not sued, had no comment.

In June, more than a week after a three-day recreational season had expired, the Commerce Department gave anglers 39 more days to fish federal waters for red snapper if states agreed to match those dates and close their waters the rest of the time.

"One of the driving forces behind the lawsuit was to keep this from happening again, both in the Gulf of Mexico and around the country. The rule rides roughshod over some of the most basic commonsense requirements" of the law governing U.S. fisheries management, said Andrea Treece, attorney for Earthjustice, which represents the Ocean Conservancy.

Among other things, the lawsuit said, the season was extended without adequate notice or time for public comment.

The federal notice stated that reopening federal waters off Texas, Louisiana, Mississippi, Alabama and Florida for three-day weekends through Labor Day, plus three holidays, could put the goal date for rebuilding the species back from 2032 to 2038. But it said it's worth it because Gulf states' economies were being hurt by the short season for anglers in private boats and because different management approaches were undermining management.

The original three-day anglers' season, which started June 1, had been set because anglers overfished their quota last year. They have regularly done so and each year's overage is subtracted from the following year's quota, resulting in shorter and shorter seasons.

They were allocated nearly 60 percent of this year's 5.4-million-pound (2.5-million-kilogram) recreational quota, with the rest going to federally licensed charter boat captains, who were assigned a 49-day season starting June 1.

Jones praised Louisiana's system for monitoring the red snapper recreational catch through surveys done at dockside and by email and phone.

He said states also should require electronic reports from anglers to keep tallies as fish are caught. The federal government gets such reports from commercial boats, each of which must stop fishing when it reaches its own quota.

Commercial fishermen agree with many of the points made in the lawsuit, said Eric Brazer, deputy director of the Shareholders' Alliance, an association of commercial snapper and grouper fishermen in the Gulf.

"As businessmen who depend on a healthy red snapper population, we're concerned with a proposal that imposes some risk on this fishery down the road," he said.

Jones said, "I think we need to find a way to get away from fixed seasons." For example, he said, Texas tends to have bad weather and high winds in early June, so a June 1 start doesn't work there.

If anglers report all of their catch electronically, he said, that might provide enough data to let them choose the days they want to fish.

"We need to get a way to get more flexible," Jones said.