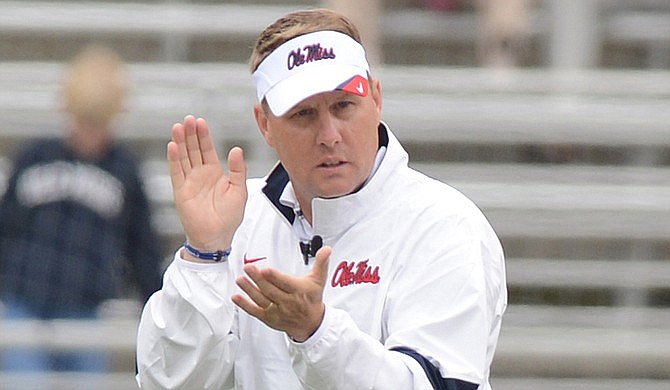 JACKSON, Miss. (AP) — The University of Mississippi's football team will not play in the postseason next year. The Rebels might be facing more penalties, too, now that the NCAA says the program has committed more than 20 rules violations over the past several years.

Ole Miss officials said Wednesday that the university has received an amended Notice of Allegations from the NCAA that includes eight new football violations, including six that are Level I, which the governing body deems the most serious.

The school says the NCAA's new charges include cash payments and other improper benefits to recruits from boosters — in one case up to $15,600 — and involve previous staff members who are no longer with the program.

Ole Miss did not release the new NOA, but discussed its contents in a 21-minute video posted on YouTube on Wednesday. The eight new violations are on top of 13 previous violations from the NCAA's prior NOA in 2016.

One of the previous 13 charges was upgraded from failure to monitor, a Level II violation, to the much more serious Level I charge of lack of institutional control.

The final tally: 21 NCAA violations, including 15 classified as Level I.

As a result, the school self-imposed a one-year postseason football ban for the 2017 season. More penalties could be coming.

"The additional allegations announced today are serious," Ole Miss athletic director Ross Bjork said in the video. "But we will vigorously defend the university against those allegations we believe are not appropriately supported, including that we lacked institutional control and that our head football coach did not promote an atmosphere of compliance or monitor staff in our football program."

"I feel terrible for our players and staff who have to handle the consequences of the actions of a very few," Freeze said in the video. The fifth-year coach added that the penalties were necessary so that the program could "move forward."

The university has 90 days to send an official response to the NCAA.

On top of the postseason ban, Bjork said that by Southeastern Conference rule the school would forfeit its 2017 postseason share, which is expected to be $7.8 million.

The athletic department had already announced some self-imposed penalties before Wednesday, including probation, scholarship losses and recruiting restrictions. Now the postseason ban has been added.

The NCAA can accept Ole Miss' self-imposed penalties or add to them after a hearing in front of the NCAA's Committee on Infractions that will likely take place in the summer or fall.

The NCAA's long-running investigation began in 2012 after a university probe discovered academic and recruiting misconduct involving the women's basketball program. Ole Miss later acknowledged the investigation had spread to the football and track and field programs.

Tunsil was the story of the NFL draft in April after a bizarre video of him smoking from a gas mask-bong contraption was posted on his Twitter account just before the selections began. There was also a post on Tunsil's Instagram account showing an alleged text conversation with a football staff member about arranging payment for bills.

Tunsil said both accounts were hacked, but acknowledged following the draft that he accepted money from a coach while he was at Ole Miss.

The school says none of the new charges are related to the draft night incident.