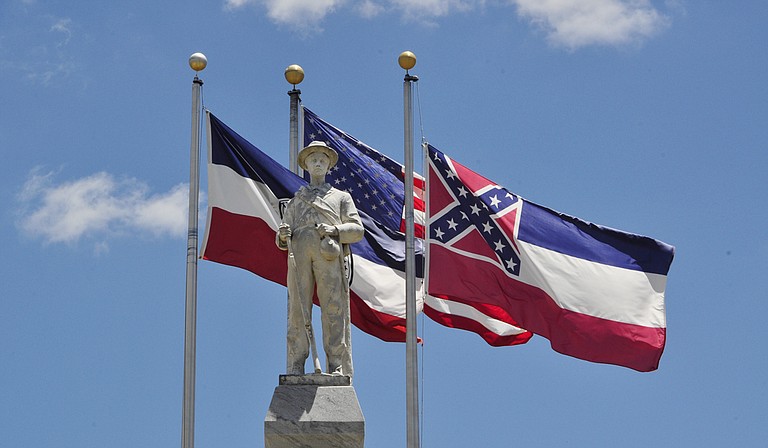 Still, for the adult version of that Yankee-fighting youth back in North Carolina, many of those statues deserve a place, even if it’s just in a museum or a cemetery. Trip Burns/File Photo

OXFORD—My young self must have killed thousands of imaginary Yankees in the woods next to our house in North Carolina. Inspired by Civil War-themed television shows like "The Gray Ghost," I put on the nearest gray cap, armed myself with my toy rifle and went to war to defend the South.

Even then, however, I knew that hanging over my TV heroes, Confederate Major John Singleton "The Gray Ghost" Mosby and crusty old Sergeant Myles Magruder, was the ugly specter of slavery.

Sadly, we're still fighting that war. With the events in Charlottesville and protests against Confederate monuments in Memphis, Durham and Baltimore, the nation is going through what folks here in the Confederate-laden culture of Oxford and the University of Mississippi wrestle with all the time: What do you do with all the Confederate reminders that are everywhere in the South?

I grew up in Robert E. Lee County, N.C. I live near Robert E. Lee County, Miss. I live in a town with two Confederate statues, one of them dedicated to those who "gave their lives for a just and holy cause." They attract countless literary scholars who come here to see William Faulkner's inspiration in writing, "the Confederate soldier ... his musket at order arms, shading his carven eyes with his stone hand." Like most Confederate statues, they appeared long after the Civil War at a time when the white South was celebrating the rise of Jim Crow.

The neo-Nazis and white supremacists came to Charlottesville ostensibly to protest the removal of a statue of Robert E. Lee. I'm sure they didn't know about Lee's own disdain for Confederate statues. Business Insider writer Daniel Brown said Lee once wrote that the statues "would have the effect of retarding rather than accelerating (the nation's) accomplishment."

President Trump is facing a political firestorm for his reaction to those white supremacists in Charlottesville. The chief executive officers on his Strategic and Policy Forum and Manufacturing Council walked out in protest. The corporate media are so enraged that they've even stopped talking about Russian influence in the 2016 election.

While Russia and Confederate statues deserve media coverage, they are also easy targets that don't challenge the corporate state. Less easy are the Trump-and-GOP-led military buildup in this country and the systematic dismantling of the nation's social safety net and environmental protections.

CNN health producer John Bonifield said this summer that CNN CEO Jeff Zucker actually told staff members to drop their climate-accord reporting and "let's get back to Russia." Prior to Charlottesville, you couldn't turn on CNN and MSNBC without hearing endless chatter about Russia, a neo-McCarthyite obsession that is manna from heaven for military contractors.

Money compromises everything in this country, including the media. In the late 1990s, CBS actually killed investigative reporter Roberta Baskin's story about Nike's connection to Vietnamese sweatshops after the two companies formed an Olympics partnership that made Nike a CBS sponsor.

Money even compromises civil-rights organizations like the NAACP, the recipient of such Nissan largesse over the years that one of its Tennessee branches named the company's North American operations "Organization of the Year" in 2016. Is this why the NAACP avoided boycotts or other pressure tactics to get Nissan to act fairly in the recent union election for the largely black workforce at Nissan's Canton plant?

Yes, take down and replace the Mississippi flag with its embarrassing Confederate insignia. Take those statues of Jefferson Davis and Nathan Bedford Forrest in Memphis and put them in a military park or a cemetery.

Still, for the adult version of that Yankee-fighting youth back in North Carolina, many of those statues deserve a place, even if it's just in a museum or a cemetery. Many of them depict a simple, country-boy soldier who fought a war not of his own making, upholding an evil, profit-obsessed institution of which he had no part, a soldier whose "carven eyes" and "stone hand" are the South's most searing reminder of the horror and tragic waste of war, particularly one fought to enslave fellow human beings.