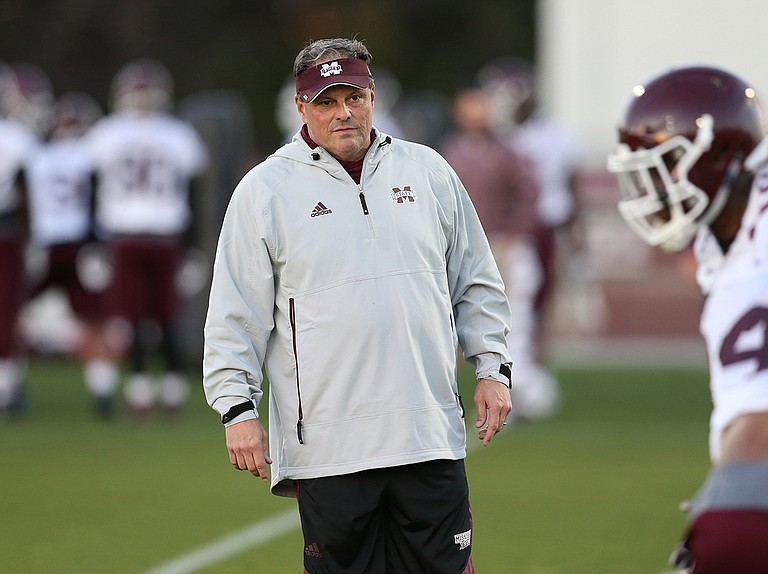 STARKVILLE, Miss. (AP) — Mississippi State coach Dan Mullen is known for his offensive acumen, and his ability to produce great quarterbacks has been particularly impressive.

Building a great defense has proven more of a challenge — especially in recent seasons.

Now Mullen has hired veteran defensive coordinator Todd Grantham, hoping the 50-year-old can help provide a quick turnaround. The Bulldogs gave up nearly 32 points per game last season, which ranked next to last in the Southeastern Conference.

Mullen said Grantham has instilled a toughness that should be beneficial once the season begins.

"If we play somebody and their offensive kids are still in the cold tub two days later — that's Mississippi State defense," Mullen said.

Grantham comes to Mississippi State after stints as the defensive coordinator at Georgia and Louisville. He'll have some good young players to work with, including defensive lineman Jeffery Simmons, linebacker Leo Lewis and safety Brandon Bryant.

Grantham said he won't try to make things too complicated.

"At the end of the day, it really gets down to don't let them run the ball and finding ways to make the quarterback play bad," Grantham said.

Mississippi State finished last season with a 6-7 record, but ended the season on a 4-2 run. Quarterback Nick Fitzgerald one of the league's biggest surprises and was especially effective on the ground, running for 1,375 yards and 16 touchdowns while averaging more than seven yards per carry.

The 6-foot-5, 230-pound was decent in the passing game, but both Mullen and Fitzgerald said there's plenty of room for improvement in that area. He completed just 54.3 percent of his passes in 2016.

"Obviously, I have to become a better passer and be more consistent," Fitzgerald said. "We're still going to stay true to the run game and making plays with my feet though."

Here are some things to watch for the Bulldogs this season:

SEASON OPENER: The Bulldogs open with Charleston Southern, a foe from the Football Championship Subdivision that should provide an easy win. But Mississippi State won't take this one for granted: In last year's opener, the Bulldogs lost to South Alabama 21-20 after a last-second field goal attempt sailed wide.

TOUGH STRETCH: Mississippi State should know by October if it's a real candidate to make a move in the SEC's Western Division this season. The Bulldogs host LSU on Sept. 16 and then follow that with difficult road games against Georgia and Auburn.

BOWL STREAK: Mississippi State has made seven straight bowl games and has a 5-2 record in those appearances. The Bulldogs' streak was in jeopardy last season after they finished the regular season with a 5-7 record, but there weren't enough teams that finished 6-6 and above to fill out all the bowl slots, so Mississippi State was selected for the St. Petersburg Bowl because its Academic Progress Rate score was among the highest for programs with a 5-7 record.

IMPROVING PLAYMAKERS: Mississippi State could use good seasons from running Aeris Williams and receiver Donald Gray to take some of the pressure off Fitzgerald. Williams finished second on the team with 720 yards rushing last season and averaged 5.3 yards per carry. The 5-foot-10, 204-pound Gray was the Bulldogs' big-play target last season, catching 41 passes for 709 yards.