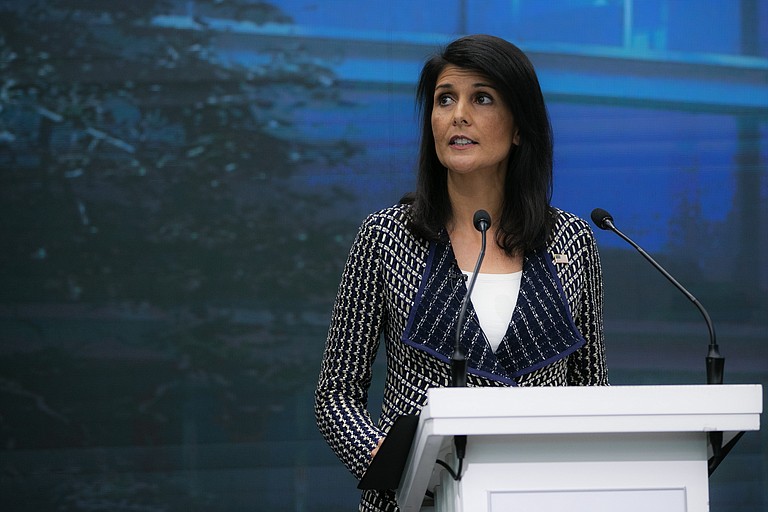 U.S. Ambassador Nikki Haley called the resolution "the single largest economic sanctions package ever leveled against the North Korean regime" and "the most stringent set of sanctions on any country in a generation." Photo courtesy Flickr/U.S. Mission Geneva

UNITED NATIONS (AP) — The U.N. Security Council unanimously approved tough new sanctions Saturday to punish North Korea for its escalating nuclear and missile programs including a ban on coal and other exports worth over $1 billion—a huge bite in its total exports, valued at $3 billion last year.

U.S. Ambassador Nikki Haley called the resolution "the single largest economic sanctions package ever leveled against the North Korean regime" and "the most stringent set of sanctions on any country in a generation."

But she warned that it is not enough and "we should not fool ourselves into thinking we have solved the problem — not even close."

"The threat of an outlaw nuclearized North Korean dictatorship remains ... (and) is rapidly growing more dangerous," Haley told council members after the vote.

The U.S.-drafted resolution, negotiated with North Korea's neighbor and ally China, is aimed at increasing economic pressure on Pyongyang to return to negotiations on its nuclear and missile programs — a point stressed by all 15 council members in speeches after the vote.

U.S. Secretary of State Rex Tillerson, in Manila for talks with regional counterparts, called it "a good outcome."

China's Foreign Minister Wang Yi called for all sides in the nuclear dispute to return to negotiations and repeated Beijing's proposal for a "double suspension," or a halt to North Korean nuclear development and joint U.S.-South Korean military exercises.

Haley told the Security Council that U.S.-South Korean military exercises have been carried out regularly and openly for nearly 40 years and "they will continue."

The Security Council has already imposed six rounds of sanctions that have failed to halt North Korea's drive to improve its ballistic missile and nuclear weapons capabilities.

It condemns the launches "in the strongest terms" and reiterates previous calls for North Korea to suspend all ballistic missile launches and abandon its nuclear weapons and nuclear program "in a complete, verifiable and irreversible manner."

The centerpiece is a ban on North Korea exports of coal, iron, lead and seafood products—and a ban on all countries importing these products, estimated to be worth over $1 billion in hard currency.

The resolution also bans countries from giving any additional permits to North Korean laborers—another source of money for Kim Jong Un's regime. And it prohibits all new joint ventures with North Korean companies and bans new foreign investment in existing ones.

It adds nine North Koreans, mainly officials or representatives of companies and banks, to the U.N. sanctions blacklist, banning their travel and freezing their assets. It also imposes an asset freeze on two companies and two banks.

The council diplomat, who was not authorized to speak publicly and insisted on anonymity, called the newly sanctioned Foreign Trade Bank "a very critical clearing house for foreign exchange."

The Mansudae Overseas Project Group of Companies, which was also added to the blacklist, is described in the resolution as engaged in exporting workers for construction, including of monuments, in Africa and Southeast Asia.

The resolution asks the Security Council committee monitoring sanctions against North Korea to ban the import of many more so-called dual-use items, which have commercial purposes but can also be used in conventional, biological, chemical or nuclear weapons.

It also gives the committee a green light to designate specific vessels that are breaking sanctions from entering ports all over the world and to work with Interpol to enforce travel bans on North Koreans on the sanctions blacklist.

The resolution expresses regret at North Korea's "massive diversion of its scarce resources toward its development of nuclear weapons and a number of expensive ballistic missile programs"—a point stressed by Haley.

It notes U.N. findings that well over half the population lacks sufficient food and medical care, while a quarter suffers from chronic malnutrition.

"These sanctions will cut deep, and in doing so will give the North Korean leadership a taste of the deprivations they have chosen to inflict on the North Korean people," Haley said. "Revenues aren't going toward feeding its people. Instead, the North Korean regime is literally starving its people and enslaving them in mines and factories in order to fund these illegal missile programs."

Though the economic sanctions have teeth, Washington didn't get everything it wanted.

In early July, Haley told the Security Council that if it was united, the international community could cut off major sources of hard currency to North Korea, restrict oil to its military and weapons programs, increase air and maritime restrictions and hold senior officials accountable.

Neither oil nor new air restrictions are included in the resolution.

Its adoption follows Tillerson's comments Wednesday reassuring North Korea that Washington is not seeking regime change or an accelerated reunification of the Korean Peninsula—comments welcomed by China's foreign minister.

Russia's U.N. Ambassador Vassily Nebenzia said Moscow hopes Tillerson's assurances "would be clear that the United States is not seeking to dismantle the existing ... situation (in North Korea) or to force to reunite the country or militarily intervene in the country."

Tillerson also said the United States wants to talk eventually with North Korea but thinks discussions would not be productive if Pyongyang comes with the intention of maintaining its nuclear weapons.

North Korea has repeatedly said it will never give up its nuclear arsenal, which it sees as a guarantee of its security.

The resolution reiterates language from previous ones supporting a return to six-party talks with the goal of denuclearizing the Korean Peninsula; expressing the Security Council's commitment "to a peaceful, diplomatic and political solution to the situation"; and stressing the importance of maintaining peace and stability in northeast Asia.