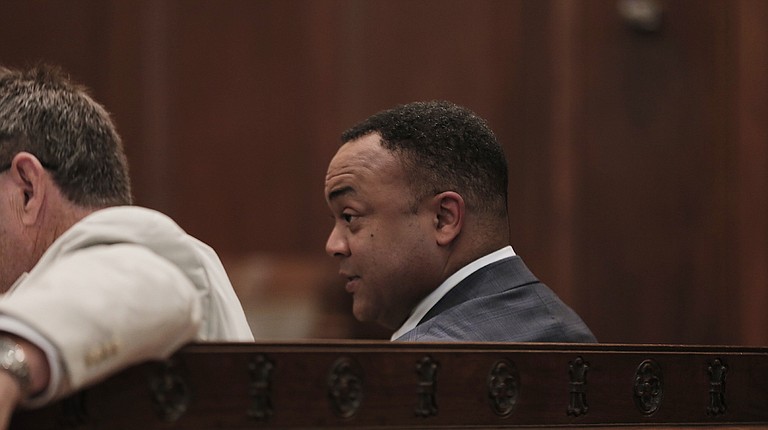 JACKSON — The connection between Hinds County District Attorney Robert Shuler Smith and Darnell Turner, a criminal defendant named in one of the six counts that Smith faced originally, has been something of a mystery.

But now, documents recently released to the public after a Clarion-Ledger legal action indicate that perhaps Turner has a closer tie to the district attorney than previously thought.

In its motion to recall the grand jury and appoint its office as temporary prosecutor, the attorney general's office alleges that Deondra "Dee" Parker, "the mother of two of Mr. Turner's children, is an employee at the District Attorney's office," the Feb. 19 filing states. "According to records, Ms. Parker signed for one of the cases that has not been prosecuted by the DA's office."

Attached to the filing is a list of cases presented to the DA's office for grand jury consideration, contained within a May 19, 2014, memorandum from then-JPD Deputy Chief Deric Hearn. Parker's signature is clearly discernible on the document.

These relationships may be important because these indictments, and how Smith treated them, appears to be the central focus of the Federal Bureau of Investigation's interest in Smith.

"On or about July 20, 2015, the U.S. Department of Justice through its agents at the FBI formally requested the assistance of the Office of the Attorney (General) via written request," the motion from the AG's office states. "The request alleged that several cases, both violent and non-violent, had not been prosecuted by the Hinds County District Attorney's office. The request went on to opine that the cases had not been pursued because all of the defendants have a relationship with Donald (Darnell) Turner."

Jim Waide, Smith's attorney, has referenced these allegations against Smith in interviews, stating that the DA has a defense for the cases. Waide did not return calls for this story by press time.

A Sept. 11, 2015, letter from FBI Special Agent Robert Culpepper alleges that Smith, "a close, personal associate" of Turner's, has not pursued cases against him although "extensive reporting indicates that Turner has been involved in a wide range of criminal activity," the letter states. "As recently as November of 2014, Turner was arrested by the Jackson Police Department for an aggravated domestic violence incident, but was not indicted by the District Attorney's office."

One example involves a trucking company, Southern Miss Transport LLC. The Mississippi secretary of state's website lists the company as dissolved since June 2009, but it lists Turner as the sole owner. The company was reinstated, once in 2014, but as of December 2015, the administration of the company had dissolved it.

"James Mangum, the son of one of Turner's truck drivers, was involved in a homicide as part of a drug deal in Jackson in 2014. Mangum was arrested for the murder by the Jackson Police Department, but was never indicted by the District Attorney's office," Culpepper wrote.

"It has been extensively reported that Robert Shuler Smith maintains an improper relationship with local business owners of Indian descent," Culpepper writes. "The reporting suggests that Smith shields the store owners from criminal prosecution for illicit activity that is conducted at their business locations."

"Chirag Kharbanda, the owner of the former Express Fuel Store on Northside Drive in Jackson, has been arrested multiple times by the Jackson Police Department for a variety of crimes and is under active investigation for drug trafficking. Reporting suggests that Smith's office has deliberately avoided prosecuting Kharbanda due to Smith's ties to the store-owning community," Culpepper states.

The status of this convenience store is unknown. WJTV reported in May 2015 that the store was shut down by a temporary restraining order/preliminary injunction Smith filed. Dale Danks, the attorney for the store at the time and now the attorney for Smith's co-defendant Jamie McBride, said then that the store had become a "magnet for a variety of illegal activity." Calls to the gas station encountered a disconnected number.

Tying it back to Parker, Culpepper points to a case relating to another individual, Tommy White, arrested for possession of marijuana with intent to distribute.

"White is reported to be an associate of Turner and a strong supporter of Smith," Culpepper wrote. "White's case has never been indicted by the District Attorney. The Police Department recently (2015) inquired about the status of the case and was told by a representative of the District Attorney that they never received the case."

Tommy White's name is one of the names listed on the document that Parker signed.

"The Jackson Police Department retained a receipt from the District Attorney's office, however, proving that the case had been dropped off in May of 2014. The District Attorney's office employee who signed for the case was Deondra (aka "Dee") Parker," Culpepper's letter states. "Parker is the mother of two of Donald Turner's children and has been suspected of deliberately pulling cases related to Turner and his associates."