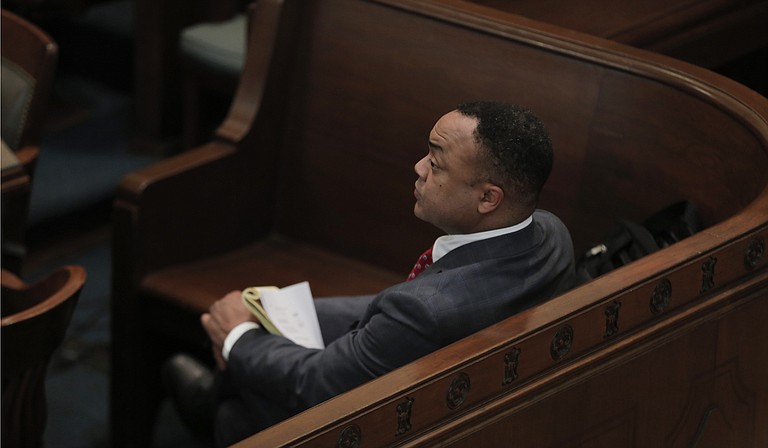 Hinds County District Attorney Robert Shuler Smith is accused of illegal actions in trying to help free a man accused of various charges. Is he going too far? Photo by Imani Khayyam.

JACKSON — Last week, a Hinds County grand jury indicted District Attorney Robert Shuler Smith, along with one of his assistant district attorneys, for felony charges for hindering the prosecution of Christopher Butler, essentially replacing the State's earlier misdemeanor charges against the DA, which were dropped earlier the same week.

The 39-year-old Butler is in jail for recent wire fraud and embezzlement charges, with years-old drug charges still pending.

So far, Smith has alleged that he is working to expose possible misconduct by public officials when it came to the prosecution of Butler. The State of Mississippi claims that Smith has tried to help Butler by violating rules against visiting defendants outside the presence of his counsel, seeking and conferring with defense attorneys, and by putting public and private pressure on judges in cases related to Butler—accusations that brought him a reprimand from the Mississippi Bar after three judges reported his actions.

The question remains: Can a district attorney be justified of stepping outside the letter of the law and standard, ethical practice in his pursuit of what he alleges is justice for who he believes is an innocent man?

The grand jury included one of Smith's assistant district attorneys, Jamie McBride, in its Sept. 7 indictment. The two are charged with conspiring to free Butler, resulting in the two felony counts of Hindering the Prosecution in the First Degree, a charge punishable with up to five years in prison and a fine of up to $5,000 for each count.

They also each face the misdemeanor charge of consulting and aiding a defendant, which could cost Smith his position. Attorney General Jim Hood's office presented its case against Smith and McBride before the grand jury last week.

"As a former district attorney, I have the utmost respect for the work our district attorneys do every day to make Mississippi a safer place to live. They are my colleagues in the fight against crime," Attorney General Hood said in an emailed statement.

"So it brings me no pleasure to prosecute one of our own. But a Hinds County grand jury has indicted Mr. Smith for serious violations of the law that hamper the ability of our criminal justice system to do its job."

McBride's name popped up last in the ongoing DA saga in an Aug. 18, 2016, affidavit he had penned at the request of Jim Waide, Smith's defense attorney. Waide then used McBride's letter in an Aug. 19, 2016, court filing to support his claim that the attorney general's office had only charged Smith out of fear that he would subpoena and indict two assistant attorneys general, Patrick Beasley and Shaun Yurtkuran, who were at that time in the process of prosecuting Butler for mail fraud and embezzlement at Mega Mattress in west Jackson.

Yurtkuran has since left the attorney general's office and now works as an attorney in the Holmes County DA's office, and has declined comment. Beasley did not return calls for comment by press time.

In the affidavit, McBride states that Beasley and Yurtkuran had called him in June 2016 because they had heard a rumor that the DA was going to try to indict them in the upcoming grand-jury convening, and McBride said he had not heard that. His affidavit did not say whether either party had an idea why Smith would try to indict them.

"I told Patrick (Beasley) that I had participated in a meeting earlier that day, that I believed I was aware of Robert (Smith)'s concerns regarding the Butler case and that to my knowledge none of those concerns had anything to do with him," McBride wrote. McBride said that Smith, Assistant District Attorney Ivon Johnson, another ADA and an investigator were also at that meeting.

Later, on July 15, federal authorities charged Johnson with taking bribes to influence a case and later arrested Rev. Robert Henderson for offering Johnson a bribe. Johnson soon turned over recordings of conversations with Smith to the attorney general about trying to help Butler.

Waide said in a Sept. 9 interview that he believed the inclusion of McBride in the indictment to be in response to that affidavit. "In my opinion, it's to retaliate. In my opinion, that's why (McBride) is a part of it, in retaliation for the affidavit," Waide said.

Role of the DA

Waide differentiates what his client has allegedly done to help Butler from the actions of a regular attorney.

"District attorneys or prosecutors are not under the same standards as defense or criminal lawyers," Waide said. "A district attorney has a duty not to pursue a case, for example, if he thinks there's been some governmental or state misconduct."

"It's not like you have to be on the side of prosecutors or the side of law enforcement. That's not the way it is supposed to work," he added.

One of the problems, though, is that this type of situation has little or no precedent, Waide said. "I don't see in cases in Mississippi where that statute has ever been used, about advising criminals by a DA, nor do I see a similar statute in any state," he said.

"There would be some question about the constitutional validity of that statute, and Robert will have to decide if we are going to challenge that or try to go to trial as quickly as possible," Waide added in the interview.

Benjamin Cooper, a law professor who specializes in legal studies and professionalism in the University of Mississippi law school, said the role of the prosecutor differs greatly from that of the typical lawyer.

"In essence, the core of our system is an adversarial process, where each side presents their evidence to the best of their ability, and that gets up the best outcome," Cooper told the Jackson Free Press. "It is the role of the attorney to be an adversary in the system and represent their client."

Still, the question of just how far a Mississippi district attorney can go to free someone he claims is innocent is still fuzzy and may ultimately depend on the outcome of the case against Smith.

Attorney General Jim Hood declined comment, citing rules that disallow the State from responding to defense arguments before a case goes to trial.

Email city reporter Tim Summers Jr. at [email protected]. Read more about the DA saga at jfp.ms/DAFiles and see all documents at jfp.ms/documents. Follow tims_alive on Twitter for breaking news in the case.