Art in the Flesh 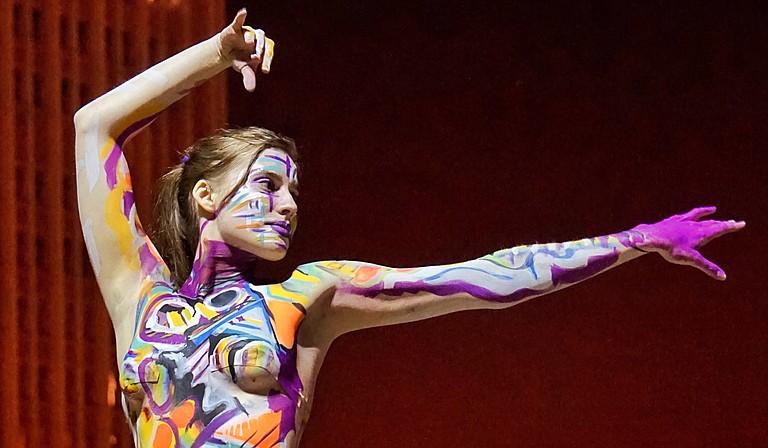 For Mississippi Museum of Art’s Midnight Modern event in April, Robeka Steam of Art in Flesh, along with artists such as Tori Faith, created body art inspired by pieces in the “When Modern Was Contemporary” exhibit. Pictured is Ashley Bleicher modeling Faith’s art work. Photo courtesy T.J. Legler

At the Mississippi Museum of Art's "Midnight Modern" event in April, previewed the "When Modern Was Contemporary" exhibit, visitors could experience the exhibit before it went on public display the next day. The evening featured music from DJ Young Venom, drinks, food, an unconventional art tour (which included a Jackson Pollock meditative art walk, where viewers found a color in his painting and then followed it around the room) and a fashion show.

But the models in the fashion show weren't modeling clothes. They were modeling pieces of art in the exhibit, which local body-painting business Art in Flesh created.

Art in Flesh is the brainchild of artist Robeka Steam. The Boynton Beach, Fla., native says she started doing special-effects makeup after graduating from the Tom Savini's special-effects makeup program at the Douglas Education Center in Pennsylvania in 2004. Ever since a photographer commissioned her for body painting in 2007, she says she has done everything from children's parties to club events to college-campus meet and greets. She moved to Little Rock, Ark. in 2014, and then to Jackson in 2015. She started doing her work under the name Art in Flesh around 2011. For it, she collaborates with other artists on body-paint designs. They have done many designs such as cyborgs, zombies, a fallen angel, a marble statue, Mother Earth and a frozen Ice Queen, among many other designs.

She says her favorite part of body painting is the fact that the canvas is living and breathing. "Your canvas interacts with you; they laugh with you; they giggle," she says. "It's more personable. It's fun seeing the transformation. Each time you go into a body paint, it's a challenge, but in a wonderful way. You're constantly pushing yourself to do something different. I'm constantly thinking about different ideas, sketching, looking at reference. I never believe you're too good for reference. I always believe you've got to look at something."

She often works with DJ Rozz on events such as glow parties. She also did body painting for the Zombie Bash JXN Con after party at Hal & Mal's last December, among other events. For the "Midnight Modern event," she worked with people such as Boston, Mass., artist Annie Medrano, Hattiesburg artist Chris Holzinger, Jackson area artist Anna Yoakum and Biloxi makeup artist ToRi Faith, whose real name is Victoria Jones, to bring the pieces to life.

Faith says she got involved with Art in Flesh after a photographer Matt Adams, found out that she did body painting and face painting. He introduced her to Steam.

"From there, Robeka just loved my work and wanted to be more involved, and she was like, 'OK, I'm going to start planning this, and I'm going to start planning that.' It was amazing. Before we knew it, she was like, 'OK, well, I just found out that we can do this body-painting event at the Mississippi Museum of Art, and it'll be a fashion show, and it'll be wonderful.'"

The Meridian native says she's always been into many types of art. "I just like to take things that are already in my head and that are interesting and beautiful and bring them into the real world," Faith says.

She used to paint herself and her face because she says she loves expression.

For "Midnight Modern," Faith says instead of bringing a specific painting to life, she pulled from different artists in the exhibit, creating a work that was bright with bold strokes, lines and shapes.

Steam says she was most excited about doing a body painting based on the art of Lee Krasner, who was Jackson Pollock's wife.

"I really liked her work, and how she went about her process was contemporary and modern art. (It had) a lot of shapes and colors," Steam says.

"I thought it would be really fun for body painting."