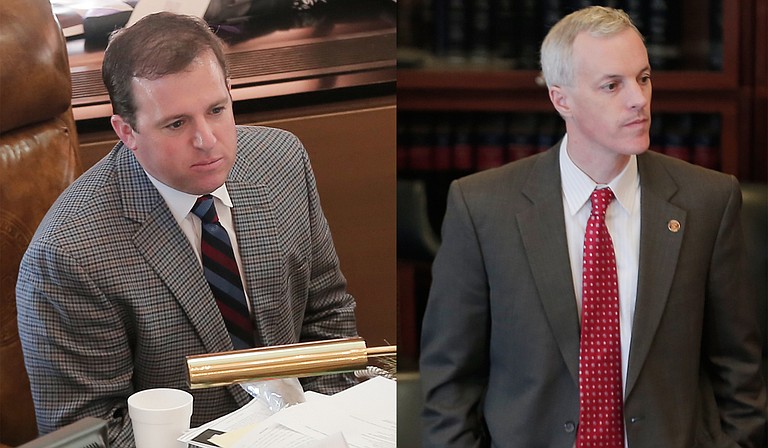 The Senate airport “takeover” bill authored by Sen. Josh Harkins, R-Flowood, (left) passed through the Senate Accountability Committee this morning; Sen. David Blount, D-Jackson, (right) voted against the bill and said the fight is about control. Photo by Imani Khayyam.

The airport "takeover" bill now heads to the Senate floor after the Senate Accountability, Efficiency and Transparency Committee passed Sen. Josh Harkins', R-Flowood, bill to create a nine-member commissioner board to replace the current Jackson airport board. Harkins said his bill is just taking a regionalization approach, which he said could improve the airport with the input of several different mayors and other agencies.

"This makes common sense and is about maximizing the effect because that is a major economic driver for our state," Harkins told the committee this morning. "And all I am trying to do is take a regional approach to it."

City of Jackson officials, community members and several local groups have come out against the bill, and Sen. David Blount, D-Jackson, spoke against the bill this morning. He asked Jackson airport CEO Carl Newman to speak briefly, and Newman, who has only been at the airport for a little over a year, said the airport is on firm financial footing and that the airport's board will vote on a new strategic plan on Feb. 29. The plan will change the look and feel of the current airport, Newman said.

"I ask that you consider forming a study group to look at not only our airport but airports across the state," Newman told the committee.

Newman said that members on that committee could include members from the Mississippi Development Authority and other agencies listed in Sen. Harkins' bill as the new representatives of the airport authority.

Blount told the committee that Senate Bill 2162 is not just a fight between Jackson and Rankin but is also a statewide issue. He read the Mississippi Airports Association letter that warned that a "legislative dissolution of JMAA may result in required Federal Aviation Administration-issued operating permit...be put in limbo, or worse, in jeopardy."

The Mississippi Airports Association fears that Harkins' bill would bring on a governance battle much like what has happened in Charlotte, N.C., where millions of dollars have been spent on litigation after a new authority took over the city's governance powers. Representatives from Tupelo, Oxford and Hattiesburg airports are a part of the airports association that signed the letter.

Sen. Blount said the real matter of dispute is two-fold: to bring back a low-cost carrier to the Jackson airport and economic development around it.

"I have never seen an issue this visceral with my constituents as this bill, but ultimately this is about control," Blount said.

The City of Jackson bought and owns the land that the Jackson airport sits on, but Sen. Harkins said the Mississippi Department of Transportation has put $4 million into the airport.

"The City of Jackson currently does not spend any funds or services on the airport," Harkins told the committee. "At the end of the day, they are not providing any services, but we aren't taking any of the revenue away from the city."

Harkins said good transition to regionalization is possible, citing the city of Syracuse, N.Y., as an example. The committee voted in favor of the bill and inserted a reverse-repealer, despite Sen. Blount's "no" vote. It will now go onto the Senate calendar for floor debate.

The American Association of Airport Executives recently placed the Jackson-Medgar Wiley Evers International Airport in the top three out of 19 small-hub airports nationwide with ANTN Digicast's 2015 Airport Awards for Excellence in Training. The AAAE presented the Jackson airport with the award earlier this month for exemplary training that Jackson Municipal Airport Authority employees completed in 2015.

The award signals the exemplary completion of federally mandated training for airport employees and personnel in the areas of aircraft rescue and firefighting, customer service, Federal Aviation Administration requirements, operations and security. Included in the awards recognition criteria are training programs for each airport complementary to its number of employees and hub size.

Renee Antoine, the director of human resources and administration for JMAA, said in a company newsletter that the award "signifies JMMA's commitment to continued professional development in cultivating a world-class workforce."