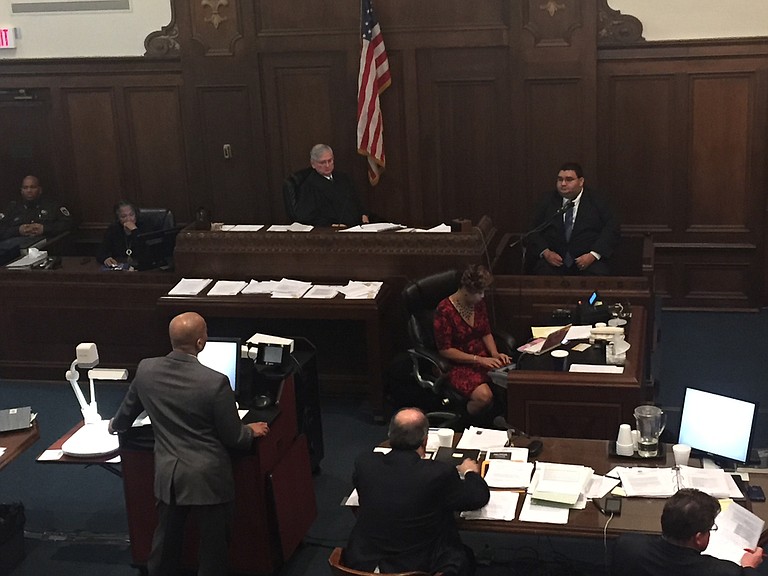 JACKSON — On the fourth day of the trial against the Hinds County district attorney, his attorney tried to impugn the motives of a former employee-turned-informant, pressing him for more details on an alleged bribery conspiracy.

Former Assistant District Attorney Ivon Johnson spent most of Wednesday under cross-examination from Smith's defense attorney, Jim Waide of Tupelo. Waide dedicated his time with the witness to going through the transcripts of two meetings between Johnson and Smith earlier this year, asking the witness to clarify his motivation for certain questions.

This morning, defense attorney Jim Waide continued to question Johnson's motives for testifying, asking Johnson who else was involved in the bribery conspiracy that he plead guilty to earlier this year.

Waide brought a copy of Johnson's plea deal for his federal conspiracy charge, indicating a section that listed the amount offered as bribes as $15,000, much higher than the $500 amount Johnson said he accepted from Marietta Harris in 2013.

When Waide pushed, Johnson said the prosecutors kept the amount necessarily vague to add unknown individuals involved in bribes to the case in the future, and that the amount associated with Johnson might increase, even though he was not personally involved with the exchange of money for favors.

Johnson called this "in for a penny, in for a pound."

After two days on the stand, Johnson stepped down today, but only after Assistant AG Robert "Bob" Anderson asked him repeatedly who hatched the original plan to assist Christopher Butler get off charges. Johnson answered several times, "Smith."

Yesterday, the state put another witness on the stand before proceeding with Johnson. Jessica Baggett, the visitation officer at the Hinds County Detention Center. Baggett walked the court through the visitation logs showing Smith's visits to Butler in jail, which the State used to arrest Smith in June for inappropriate contact.

Waide, in his cross-examination of Baggett, asked her if there was any prohibition preventing Smith from visiting prisoners. She said no, but that she had never seen him in the jail before 2016, when he visited Butler at least twice.

The prosecution today put Juan Chapa, a K-9 specialist with the Hinds County Sheriff's Department, on the stand to testify about the search of Butler's cell earlier this year. Chapa said they found a cell phone, some altered pens and a letter from Smith to Butler's attorney Sanford Knott, seizing the letter at that time.

Waide asked Chapa during cross-examination why the sheriff's department seized that letter in particular, considering prisoners frequently have letters. Chapa said that it was because the letter contained information that indicated that there was "criminal action."

Although the Jackson Free Press was unable to get a copy of the letter by press time, here is the content of the letter printed on paper with the DA's letterhead:

Please be advised that I have enclosed a motion for contempt of court and other relief, which was field on Friday, March 18, 2016, due to the blatant and contemptuous behavior of Assistant Attorneys General Patrick Beasley and Shaun Yurtkuran. Per our conversation regarding the subsequent hearing held on Friday, March 18, 2016, I was not advised by the Attorney General's Office that a hearing would be held. Furthermore, based upon your representation that the Court held that I waived my right to object based upon the rationale that I was not present I strongly disagree with the Court's ruling. Needless to say, I am the duly elected District Attorney for Hinds County, Mississippi, and therefore, I can appear before any Court in this jurisdiction—especially regarding the Christopher Butler matter. Furthermore, it should be noted that my objections to the Butler is well-documented in various previously held hearings.

Secondly, the defendant has a right to a preliminary hearing, which was set at least twice by the Court. Upon failure to present evidence at his preliminary hearing by the Attorney General's office, who filed an affidavit, warrant and ultimately influenced his bond to be set at a highly unreasonable amount under the circumstances further proves my theory of this case in the Butler matter. Contrary to the ruling, the Attorney General's office has violated r. Butler's constitutional rights in numerous ways and by continuing to confine him under the circumstances also violates his civil rights. In fact, the defendant did not waive his constitutional right to a preliminary hearing, but has been denied his right as well as being held in confinement under these circumstances. I will forward this letter to all parties who have affected the rights of Mr. Butler and will continue to move forward with all proceedings as planned for the administration of jurisdiction and equality for all who appear before Court in Hinds County, Mississippi. If there is anything further, please advise me as soon as possible. Thank you.