The Vamps Rev Up 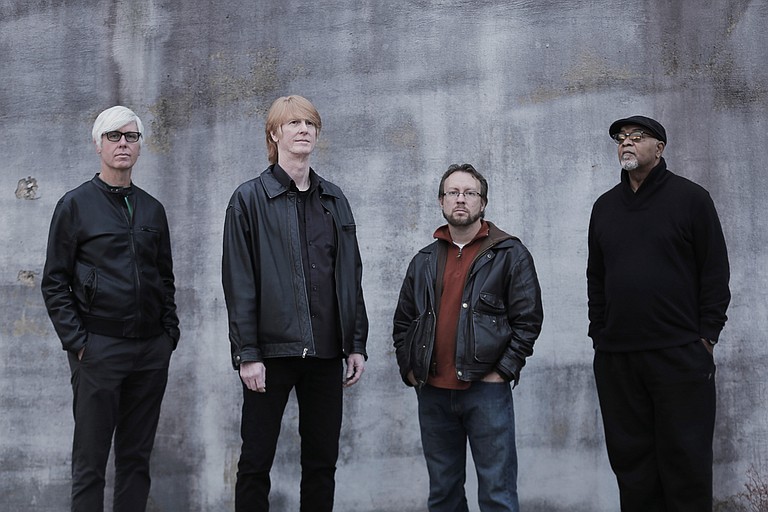 (Left to right) Denny Burkes, Barry Leach, Todd Bobo and Adib Sabir are four of the members of Jackson soul and jazz ensemble The Vamps. Photo by Imani Khayyam.

When The Vamps performed at Duling Hall in December 2015, attendees kept telling the musicians how thrilled they were that the band was playing a reunion show. Of course, the issue with that, drummer Denny Burkes says, is that they never broke up in the first place.

"It's still very much a living, breathing organism," he says.

In Mississippi's ever-changing music scene, it is rare to find a band with the longevity of The Vamps, which first formed in 1998. While fans won't find the Jackson soul and jazz outfit playing a monthly rotation of Martin's Restaurant & Bar, Hal & Mal's and Ole Tavern on George Street as it did in the old days, the seven-man troupe still plays weddings and corporate gigs as well as larger events such as the Township Jazz Festival.

One factor that has contributed to the band's long life is that each member plays with a variety of other acts, keeping The Vamps as a sort of family reunion when they get together.

Those who haven't seen The Vamps in the past year will notice Todd Bobo on tenor sax, following longtime member Booker Walker's retirement from music last year. Leach says they had hoped Walker would join them onstage for their upcoming show at Duling Hall this Thursday, Dec. 22, but sadly, Walker died suddenly on Oct. 5.

Walker performed with countless local musicians over the years, but some people may not know that he also backed iconic acts such as The O'Jays and B.B. King, even playing on the late blues icon's 1971 album "Live from Cook County Jail."

"It brings it into focus to me just how amazing this group is," Burkes says of Walker's passing. "The more time goes by—we're 20 years with this—it makes me appreciate it that much more, especially with someone like Booker passing, which affected me a lot. I had a real affinity for Booker, and any time we had an out-of-town gig, we'd ride together, and I'd drag stories out of him that he would never talk about."

Despite life and other projects pulling the players in many directions, Burkes says The Vamps has been his favorite group to work with because it manages to be challenging and easy at the same time—the latter because the members gel so well and no one has an ego, and the former because the arrangements all happen on the fly.

"This was built on the soul-jazz of the late '60s and the '70s, and Blue Note Records, where it's improv, you know," Leach says. "We're just like, 'Here's the tune, and we're just going to get a certain groovy kind of thing to it. Take off for a while; explore with your instrument.'"

While Leach writes lead sheets to provide a basic structure, the musicians mostly have free rein onstage to play off one another and take songs down different paths. The band has only rehearsed two times in almost 20 years, both prior to recording sessions for their albums, 1998's "Loose Wig" and 2001's "Angle Not Distance."

Throughout its early years, The Vamps became a highly sought-after commodity in the metro area for their versatility, adding everything from Latin jazz music to reggae to their repertoire as they performed original compositions and favorite covers for private events. As a result, they began playing in the local club scene less and less, Leach says. Due in part to the economic downturn, though, clients began asking if the band would perform as a quartet instead of its full lineup.

"Well, yeah, we can do that," Leach would tell them, "but you're not getting The Vamps, you know?"

"Things go in cycles," he says. "We were the hot new fun, different group, so people were like, 'I don't want your standard Motown or your standard funk,' which now they want back. They want the Doctor Zarr's, the Molly Ringwalds, because things come around and go around."

Even so, The Vamps aren't short on supporters in the capital city and beyond, whether they're diehard fans of the group's original songs or casual listeners who just appreciate a creative take on a classic tune.

"I think it's because we've been doing it so long and because of our reputation that we've worked hard at getting," Leach says. "A lot of our fan base is not going to come out to Martin's anymore because they have families. They're the old guys! But the word (spreads): 'Oh, The Vamps, yeah!' So we have the new kids who are open to something they haven't heard before."

In addition to their live performances, Burkes says the musicians hope to record a third album in the future, but as with all things The Vamps, it is a matter of finding the time.