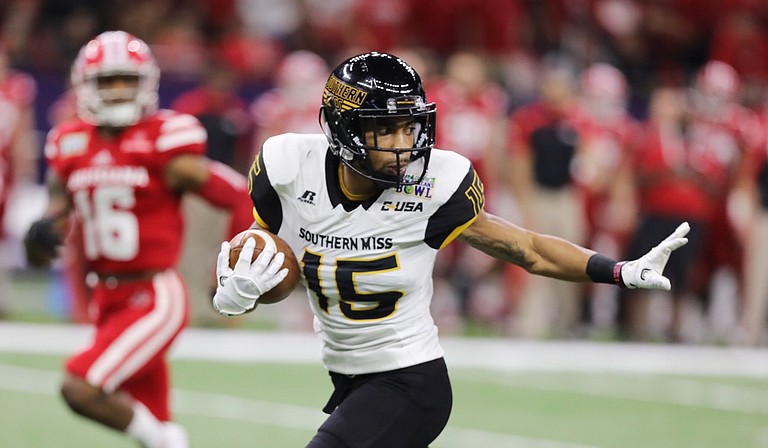 NEW ORLEANS (AP) — Southern Mississippi career passing leader Nick Mullens finally has the bowl triumph that eluded him until his final college game—thanks in no small part to a record performance by one of his veteran receivers.

"To end it like this, I couldn't ask for anything better," said Mullens, who lost his only other bowl appearance last season. "Last year, I was crying because we lost ... and now I'm trying not to cry because we won."

Mullens finished his distinguished career by throwing for 346 yards and two TDs. His first touchdown strike was a 6-yarder to running back Ito Smith, who also rushed for 138 yards and two scores.

"He made something out of nothing a couple of times," Southern Miss coach Jay Hopson said.

Mullens' second-quarter fumble and fourth-quarter interception both led to Cajuns touchdowns, the latter on a short run by quarterback Anthony Jennings that trimmed Southern Miss' lead to 28-21 with 5:10 to go.

Another defensive stop got ULL's offense the ball once more on its own 18-yard line with 2:02 to go, but Jennings overthrew a fourth-down pass as he rolled right to end the Cajuns' last chance.

The Golden Eagles' defensive front pressured Jennings constantly, sacking him six times, forcing him to throw off his back foot on an underthrown pass that was intercepted by Tarvarius Moore at the Southern Miss goal line, and dropping him for a loss on a fourth-and-short play.

"We didn't handle the pressure well. You've got to give (Southern Miss) credit," ULL coach Mark Hudspeth said. "They've got some really good players on their defensive line. ... We just didn't have the answers for the protection."

Jennings scored twice on runs, but the senior transfer from LSU completed 8 of 20 passes for 95 yards. His biggest nemesis was defensive lineman Ja'Boore Pool, who sacked him three times and pressured him often.

The Cajuns' composure was tested early. Mullens completed his first three passes for 127 yards and a touchdown to Smith, who also rushed for the game's opening TD as the Golden Eagles took a 14-0 lead on their first two series.

But ULL methodically got back into the game, starting when Jennings led a nine-play, 66-yard drive capped by his 4-yard TD. In the second quarter, Tre'maine Lightfoot's sack and strip of Mullens was scooped and returned 15 yards by Otha Peters to the Southern Miss 29, setting up a tying 12-yard TD run by reserve QB Dion Ray, who periodically ran plays out of a "wildcat" formation.

"Our guys rallied once again and that's another example of the character of this football team," Hudspeth said, alluding to the Cajuns winning four of their final six games just to become bowl eligible. "After the first five minutes of the game, I thought we played really well."

"That guy made dynamic play after dynamic play," Hopson said, pointing at Staggers, whose performance also gave Southern Miss its fourth New Orleans Bowl victory in five appearances. ULL lost for the first time in the New Orleans Bowl, which it had won four times, although two of those triumphs were vacated because of recruiting violations.

Southern Miss: The first order of business is to find a replacement for Mullens, who leaves the Golden Eagles as the program's career leader in yards passing (11,994) and TD passes (87). Complicating that transition at QB is the departure of three-year starting center Cameron Tom and starting guards Oliver Bates and Brandon Farmer.

Louisiana-Lafayette: The Cajuns are expected to apply to the NCAA for another year of eligibility for Jennings, but prospects for approval appear slim. The next QB could come from junior college. The offense also loses McGuire, who ranks second all-time in rushing for ULL, and top receiver Al Riles.