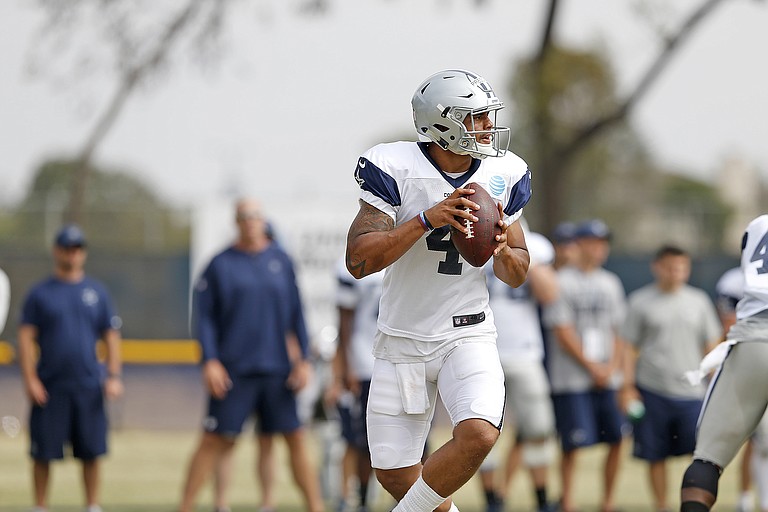 FRISCO, Texas (AP) — Dak Prescott shrugs at the suggestion that the Dallas rookie quarterback's startling success in two preseason games is a product of what skeptics might call the "vanilla" defenses of the exhibition season.

The Art, Craft and Work Ethic of Dak Prescott 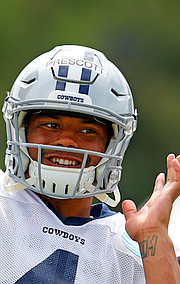 Prescott has a preseason NFL-high 158.3 passer rating with four touchdowns, no interceptions and a pair of rushing TDs, giving the Cowboys plenty to think about for a backup to Tony Romo after incumbent Kellen Moore broke his right ankle early in training camp.

Executive Vice President of Personnel Stephen Jones said the day after Moore's injury that the Cowboys wanted a veteran in the room with Romo. The No. 3 quarterback is second-year player Jameill Showers, who spent most of last season on the practice squad.

Jones stops short of indicating he might have changed his mind. But his dad, owner and general manager Jerry Jones, sounds ready to commit to Prescott. "You would have to say that the more reps these young guys are getting then the better it is for the team, the better it is for their evaluation or their progression," Jerry Jones said after Prescott threw for two touchdowns and ran for two more in a 41-14 preseason win over Miami.

"If you weigh all of that, the logic goes toward you're in better shape today to go with them than you were three weeks ago. And I would say we are."

Prescott likely gets his best test yet Thursday night at Seattle, where he figures to play most, if not all, of the second half. Romo should get the bulk of the first half in what will be his longest preseason outing.

The backup job in Dallas is an important topic because Romo missed 12 games last season with a twice-broken left collarbone. The Cowboys went 1-11 without the 36-year-old during a first-to-worst 4-12 season in the NFC East. Dallas declined to bring in another veteran to supplant Moore, suggesting he showed enough in two-plus games last season to be a viable backup.

After Moore's injury, Prescott showed the same qualities the Cowboys say they saw the moment he arrived as a fourth-round pick, the first quarterback drafted by Dallas since 2009. "Anytime you see a rookie come in and have the production he's had, it's surprising I think by any rookie," Stephen Jones said. "But in terms of from the day he's walked in the door, he's shown a lot of unique intangibles, I think rare intangibles, in terms of his leadership, his people skills, his ability to lead."

Getting the start in the preseason opener at the Los Angeles Rams—the first game in LA in more than 20 years—Prescott directed scoring drives on three of four possessions to help the Cowboys build a 24-7 lead. Prescott completed his first eight passes the next weekend against the Dolphins and is 22 of 27 for 338 yards through two games.

"Seeing him in the game is just an extension of what we've seen in practice," linebacker Sean Lee said. "The more I get to know him, there's a reason why he's been so successful in college and why he's played so well. He's got that personality where he's constantly trying to learn."

In perhaps his biggest achievement so far, Prescott has reporters asking him how he has made it look so easy. "I don't think easy's the right word," said Prescott, who joined Tim Tebow as the only SEC quarterbacks with at least 70 touchdowns passing and 40 rushing in a career. "I've got great veterans, great coaches, who are putting me in great position to have success. I'm thankful for that. But it's a lot of hard work that goes into this."

Prescott talks frequently of his own high expectations, which would seem an automatic rejection of the notion that he's surprising even himself. But he's willing to concede ever so slightly. "You never really think you'll come in and have a QB rating like this, but you're going to try your damnedest to do that," Prescott said. "I'm just going to continue to do that each day at practice and in the games as well."

This time next month, Prescott could be another Romo injury away from seeing how he handles the real thing.

Also see: The Art and Craft of Dak Prescott and Dak Prescott on NFL Debut, Coach Garrett, Poise and That DUI Charge