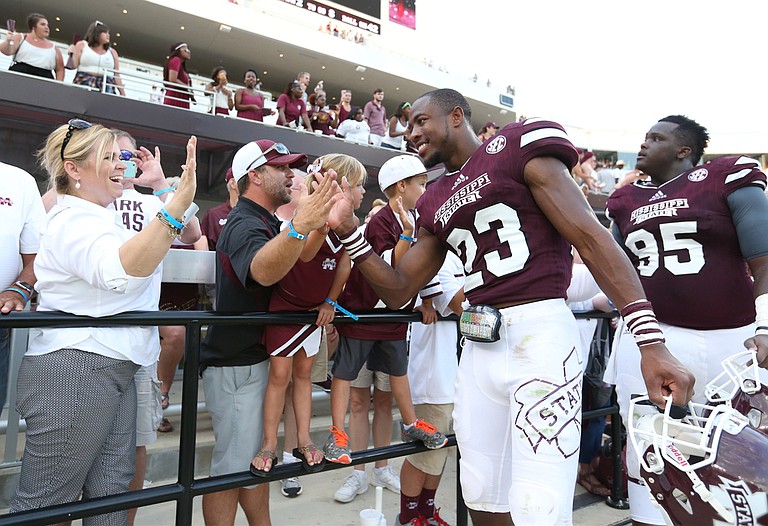 When the 2016 NFL Draft kicks off Thursday, April 28, several big-name players and supposedly can't-miss future stars will be the first to come off the board. Rounds two and three will follow on Friday, as the top college players find where they will begin their professional career.

The bulk of the picks in the draft have to wait until Saturday to hear their names called during rounds four through seven. It could be then before former Mississippi State University cornerback Taveze Calhoun gets snatched up.

While scouts rave about Calhoun's character, ability as a leader and his intelligence, his lack of speed is the major factor that will have him waiting to see if a team drafts him. But the cornerback has been overachieving on the football field his whole career.

The 6-foot-1-inch, 180-pound defensive back helped lead his team at Morton High School in Morton, Miss., to a 9-4 record and to the second round of the 3A division playoffs during his senior season. He was also named First-Team All-State.

Calhoun made 90 tackles and six interceptions with two forced fumbles in his final high-school season. He also ran the ball 31 times for 205 yards and three touchdowns on offense, and he blocked one punt on special teams.

After he finished his high-school career, Calhoun was a consensus all-state prospect in the 3A division. He also made the 40-player roster of the Mississippi-Alabama All-Star Game, where he scored an interception.

During his true freshman season at MSU in 2011, a season-ending surgery on Calhoun's right shoulder forced him to take a redshirt. As a redshirt freshman, Calhoun played in all 13 games on special teams and as a backup cornerback, making 24 total tackles and one forced fumble. In the classroom, the cornerback also earned a spot on the SEC's academic honor roll.

Calhoun entered the starting lineup in his sophomore season, starting 12 games at cornerback and playing on special teams. He tallied 45 total tackles, 33 solo tackles, 1.5 tackles for a loss, three interceptions, and one forced fumble and fumble recovery. He also made the SEC fall academic honor roll.

As a junior, Calhoun started all 13 games and made 43 tackles to finish fourth on the team, as he added nine pass breakups, 3.5 tackles for a loss, one interception and one fumble recovery. He was named to SEC fall academic honor roll again, as well.

After missing his senior-season opener, Calhoun started the remaining 12 games. He finished his final college season with 36 tackles, 6.5 tackles for a loss, 10 passes defended and two interceptions.

During his college career, Calhoun played in 50 games at MSU and made 36 starts. He racked up 161 career tackles, 12 tackles for a loss, six interceptions, three forced fumbles and one fumble recovery. Referees only flagged him once for pass interference out of his 136 targets.

Calhoun made the SEC community-service team and the SEC fall academic honor roll again in his senior year, and he was a National Football Foundation National Scholar Athlete and finalist for the William V. Campbell Trophy, which many people consider to be the "academic Heisman." He was the SEC's only NFF National Scholar Athlete and maintained a 3.5 GPA while earning his undergraduate degree in interdisciplinary studies. He played during his senior season while working on his master's degree and earned a spot in the 2016 National Football Foundation Hampshire Honor Society.

Calhoun was one of six MSU players to receive invites to the NFL Combine in February. It was at the combine that Calhoun's draft stock took a hit after he ran a 4.58-second 40-yard dash. His workouts at the combine were also at the bottom of the cornerback group.

Calhoun improved on his workouts and times during the MSU Pro Day and had solid drills and individual workouts while back on campus.

Nearly every scouting report dinged Calhoun on his speed and his size, but most noted how hard he works and his ability to read plays quickly. He is considered a third-day draft choice or a player for a high-priority free-agent signing. The cornerback met with several teams at the MSU Pro Day and during the weeks leading up to draft.

While Calhoun might not be considered a high draft choice, chances are good that he will outperform his peers on whichever team drafts him, seeing that he has overachieved despite being overlooked most of his career.