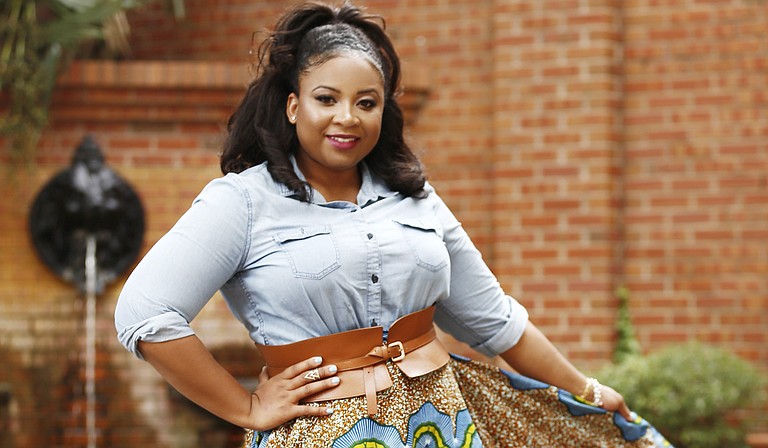 Kamilah Grim calls herself a jack-of-all-trades. She served in the Army National Guard and was deployed in 2005. She was a Magnolia Roller Vixen from 2008 to 2014. And she's also a fashion designer and artist. "I've always kind of hustled a little bit," she says.

The Kansas City, Mo., native graduated from Lincoln University in Missouri with a bachelor's degree in sociology with minors in education and military science in 2002.

After college, she joined the National Guard as a technician. She was deployed to Iraq in 2005, spending time there for a year. She came back to the States in 2006 as a second lieutenant and retired in 2007.

Grim, 37, moved to Jackson almost seven years ago. She began working at Siemens as a project coordinator, and after being laid off Memorial Day weekend 2015, she decided to focus on her business, Kamie's Kreations.

She began making her own clothes after she had her son, Marcus Grim.

"I've always loved fashion," she says. "(Before Marcus), I was always able to buy things in the store. I could always get ready-to-wear off the rack. As soon as I had my son, I couldn't fit in anything really, or the things they had for plus-size girls. I really didn't like or I would look online and it was out of my price range."

After she moved to Jackson, she started making her own clothes.

She says people would ask her, "Where did you get that?" or "Who made that?" When she would say she did it, they'd tell her they wanted one. "I was surprised people actually liked it enough to want to buy it," she says. "... It's one thing to make your own clothes. You know, you kind of make it for yourself. Who cares if the zipper is crooked? Who cares if the button's not right?" But, she says, making clothes for others was an entirely different ball game. While she knew the basics from home-economics classes in high school and picked up a few other things from her grandmother, Shirley Bradford, she had to learn through trial-by-fire how to make it for other people.

Along with fashion, she's also an artist.

"Art almost came the same way (as fashion)," she says. "I just kind of got bored one day, and I started making things in my house that I would like. And people were asking me to make them one. It was crazy." She says she mostly makes art for herself, but occasionally, someone might ask her to make something.

On Oct. 1, Grim moved into her own studio at The Hangar in midtown.

"Everything happens for a reason," she says. "I was really bummed that Siemens laid me off. ... But no lie, as soon as I got laid off, things started opening up for me. I started selling some of my clothes in some of the stores in Fondren. Things just started happening for me that there's no way I would have been able to do working a full-time job at Siemens. It would have happened."