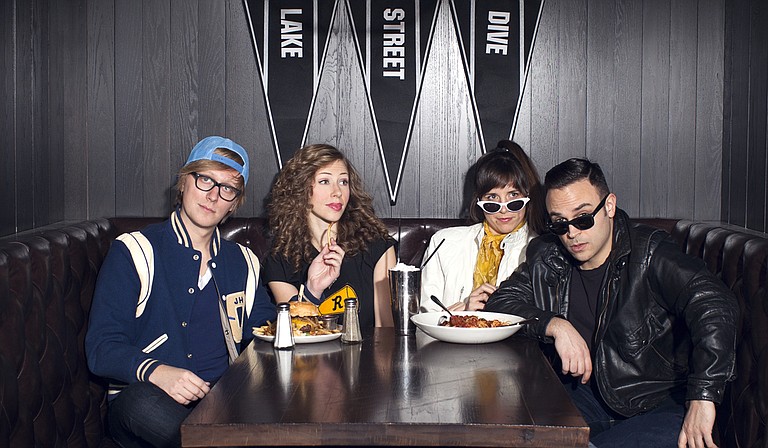 After more than a decade performing together, the musicians of Boston soul-pop act Lake Street Dive are starting to see their hard work pay off in a big way. Trumpet player and guitarist Mike "McDuck" Olson approached his fellow New England Conservatory students and now-longtime compatriots—vocalist Rachael Price, bassist Bridget Kearney and drummer Mike Calabrese—about forming a band in 2004. The group celebrated its 10-year anniversary with the release of its latest full-length album, 2014's "Bad Self Portraits," which received sparkling reviews from publications such as the Huffington Post, USA Today and Rolling Stone.

Since the record's release, the band entered a nearly nonstop tour, which comes to Duling Hall in Jackson on Tuesday, Oct. 13. The Jackson Free Press recently spoke with Olson by phone about Lake Street Dive's rigorous tour schedule, the effects of media hype and what it was like making "Bad Self Portraits."

Tell me about your current tour and what you've been up to since releasing "Bad Self Portraits" last February.

We were sort of joking last night that even though we do occasionally go home, the tour started in the spring and continued through the summer and is still just going on through the fall. It feels like one year-long tour, just in the sense that we're still pretty much riding the high from releasing "Bad Self Portraits" last year and still feeling the benefits of some of the cool TV stuff we did last year, which was a first for us.

We're starting to incorporate new material into the shows since this summer because, you know, we're going to be releasing another record next year at some point, so it's nice for us to start road-testing the new songs. And festival season is over, so we're back to playing clubs and theaters, which is kind of nice. It's been raining on us the last couple days, and that would have made for unpleasant festivals. So it's more of the same, but not in a negative way. We're still really enjoying the road, and the road is good to us, thankfully.

Describe the process of recording the album and the response so far.

Well, we made the album before we got really any of the momentum from some of the big things that happened last year and the year before, and so when we made the album, there was no pressure, which was great. We kind of holed ourselves up in rural Maine and didn't look at the Internet, didn't look at our emails and barely took phone calls. And we're coming out of that process, driving back into civilization, and everyone turns on their phones, and we realize that we had a YouTube video that had gone viral during those intervening weeks, which is totally crazy. That was the first time that had ever happened for us.

And that was such fortuitous timing because, as I said, there was no pressure during the recording process, which you don't want. You don't want to think to yourself while recording a record, "Oh, we have to live up to all this hype." You just want to be as purely creative as possible. So coming back and realizing, OK, there's this YouTube video gone viral; now during the release cycle, we're doing TV, and we're selling out 30 shows in a row. All of that happening after the recording process was the best possible sequence of events.

What would you say is the coolest thing that came out of the hype around "Bad Self Portraits"?

There was a whole host of things that came from that level of even small-time notoriety, because, you know, we're not famous by any stretch of the imagination. The album release tour we went on last spring was like nine weeks of continuous touring, and that was a bear. It was an intense tour. But every single show was completely packed. Literally every venue was sold out, just on the back of the viral YouTube video. Playing Stephen Colbert's show, being a part of the Coen brothers' "Town Hall" concert, it's always really gratifying when you do those things that feel so surreal but that you see translate to ticket sales. (That's) so very much the ideal—to do things that are outside the norm or a little wacky and have people show up to your shows that are excited to see you who say, "Hey, I'm here because I saw you on Colbert, I saw you on the 'Town Hall' show."

How do you capitalize on that success for your next album or next tour?

That's a good question. You know, the reason we're on tour constantly is because touring has always been our bread and butter. Even if we are doing things that reach more people in one fell swoop like a music video or television show, it's really important for us to be on the road and seeing as many communities of varying sizes as we possibly can because that's what connects to fans. It feels more significant, I think, to fans if they say, "OK, they keep coming back to my little town, this smaller city. They're not just hitting the major markets." That connection lasts longer, in our opinion and our experience. It's more enduring than doing some kind of video blast where we're like, "Hey, these are some fans," or doing a TV show where one date of our time reaches everyone at the same time. This is a much more personal but also much more rigorous method of keeping up with fans. We're doing it as long as we feasibly can.

What can fans expect from the new music you're writing?

Not to dodge the question, but it's actually really hard to know on the inside because with every new song, we try to learn from previous songs—what worked, what didn't work, what directions have we taken where there could be deeper exploration. From the inside of the band, all the new material we've been playing live and will appear on subsequent records feels like a very natural progression of us as a creative unit. And I'm actually very interested to know if that comes across to the fans. We've been playing the new songs live but sort of interspersed in "Bad Self Portraits" material, so next year, when we're playing a lot more new stuff, I'll be interested to know if people agree with us—if they think it's a logical progression or if it's a divergence. I wish I knew.

The media have given Lake Street Dive a lot of different genre labels. How do you tend to describe yourselves?

When we talk about this kind of thing, I find that we often end up just referring back to music that we love because that informs everything that we do. I don't know if this necessarily comes across, but we're all such students of the music of the '60s and '70s, you know, like the British Invasion, classic '60s soul, early disco, stuff that was made in the Motown era, the Muscle Shoals studio, and anything that was played on by the Wrecking Crew in L.A. All of these things, when we write and rehearse, these are the things we talk about. We'll be like, "You know, Carol Kaye would've played this bass line on a Beach Boys tune, so let's incorporate that. Sam Cooke would've sung something like this. Let's do that." For our money, we are a band that plays '60s pop music removed by 50 years, and if that translates, great! But if that's not what people are hearing, then, quite frankly, I have no idea how to describe it.