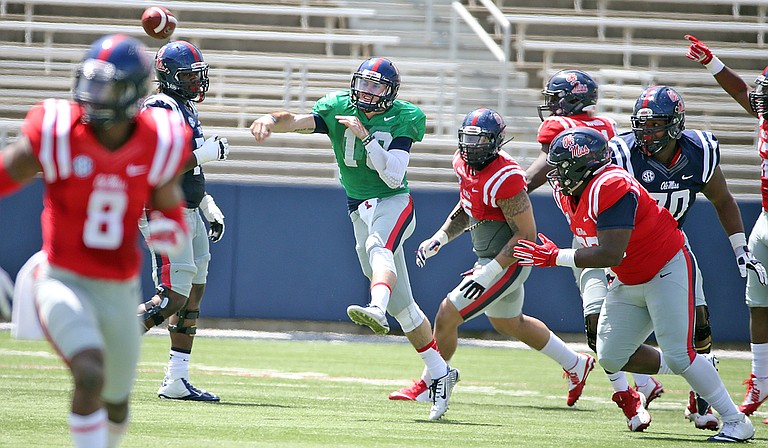 Since the 2000 college-football season, Mississippi State University has won seven Egg Bowls, and the University of Mississippi has won eight, including last year's 31-17 win. The winner of this year's game could be the team with the high-profile quarterback that plays the best.

Much has been written about Bulldogs quarterback Dak Prescott. He has been in the Heisman discussion and is a Conerly Trophy finalist.

The Rebels quarterback, Chad Kelly, was better known for his blowups on the field and his troubles off the field. For UM this season, Kelly has been able to make the Rebels offense hum for most of the season.

Kelly was a four-time National Punt, Pass and Kick winner and played for St. Joseph High School at a New York state high-school championship as a junior and senior. He was able to capture a state title as a junior but fell short his senior season.

In his senior season of 2011, Kelly passed for 3,050 yards and 27 touchdowns and ran for 991 yards and 14 touchdowns. He was a member of the Elite 11 and participated in the Under Armour All-American Game and SuperPrep All-American.

ESPN.com ranked Kelly as the 84th overall prospect, fourth best quarterback in the nation and No. 1 recruit in New York; Rivals.com and 247sports.com ranked him the fourth best duel-threat quarterback (running and passing quarterback). He also played lacrosse and basketball in high school.

The highly sought-after quarterback decided to attend Clemson University in South Carolina after his senior season in high school. He was redshirted his freshman season in 2012 and saw no action on the field.

In 2013, Kelly only saw action in five games and went 10 of 17 passing for 55 yards and 16 rushes for 117 yards with a touchdown. He tore his ACL during the spring game that year, which limited his action that season.

In the 2014 spring game, Kelly's career at Clemson came to an abrupt end. In a three-way battle for the starting quarterback for the Tigers, Kelly had a meltdown during a verbal altercation with coaching staff after a poor half in which he threw two interceptions.

Kelly was benched for the rest of the spring game, and by the following Monday, he was released from Clemson for "conduct detrimental to the program." His next stop was East Mississippi Community College in Scooba, Miss.

At EMCC, Kelly passed 3,906 yards with 47 touchdowns and just eight interceptions as he added 446 yards and four touchdowns. He led East Mississippi to a perfect 12-0 record and the National Junior College Athletic Association national championship.

Kelly was named NJCAA first-team All-American, and received Mississippi Association of Community and Junior College Most Valuable Running Back, East Mississippi Most Valuable Offensive Player, All Region and All-State and Mississippi Bowl Committee Player of the Year honors.

Leaving East Mississippi after one season, Kelly decided to sign with UM but was in the spotlight for the wrong reason again shortly afterwards. At a Buffalo, N.Y. nightclub, Kelly was charged with several offenses, including fighting with bouncers and threatening to return and shoot up the club with an AK-47 rifle.

Kelly and his attorney reached a plea-deal for 50 hours of community service. He enrolled at UM in January 2015 and went with Rebels head coach Hugh Freeze on a spring-break mission trip to Haiti.

Heading into the Egg Bowl this Saturday, Nov. 28, Kelly has thrown for 3,504 yards with 25 touchdowns and 12 interceptions. He also has run for 353 yards, adding nine more rushing touchdowns.

Kelly has one more season of college eligibility left no matter what happens in the Egg Bowl or the Rebels' bowl game. He could also decide to forgo his senior season and make himself available for the NFL Draft.

Check out which of these two outstanding quarterbacks plays the best in the 2015 Egg Bowl at 6 p.m. on ESPN2.