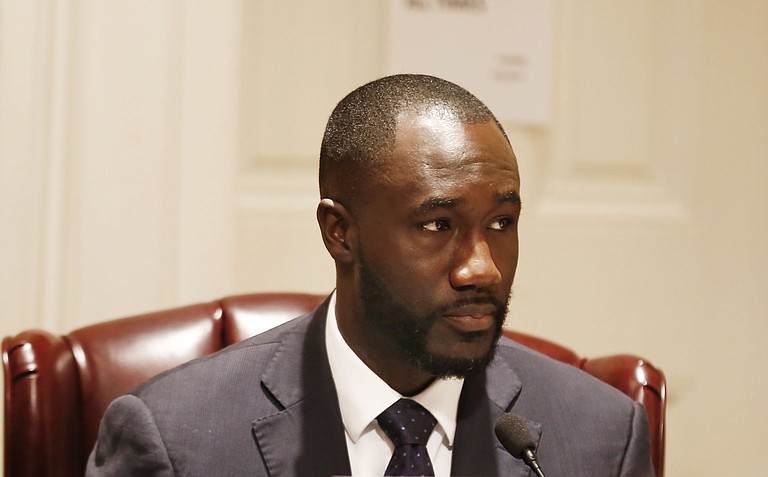 Mayor Tony Yarber shrugs off questions about his administration’s accessibility as grandstanding and obstructionism. City council members say Jackson citizens want them to ask questions of the mayor and his staff. Photo by Imani Khayyam.

In recent weeks, Mayor Tony Yarber and members of the Jackson City Council have clashed over a number of high-dollar contract negotiations, but the key players offer different perspectives on the root causes of the disagreements.

Months of simmering frustrations came to a head during and following the Nov. 3 city council meeting, when the council again voted against a Yarber administration recommendation to award an approximately $13 million contract for hauling sludge away from the Savanna Wastewater Treatment Plant due to a controversy over contract bids and allegations of favoritism.

It was the council's second "no" vote on the contract in the past few months. The City must now restart the request-for-proposal process, which makes it more likely that the City won't meet the Environmental Protection Agency's 2018 deadline.

Yarber and his top lieutenants left council chambers to hold a press conference while the Nov. 2 meeting continued. The mayor also spoke to the Jackson Free Press, taking issue with statements council members have made that his administration often fails to provide timely information before asking for a vote.

The mayor says he has been more than transparent and accessible to the seven-member council.

"At the end of the day, this whole idea about not knowing stuff, not getting stuff, that's so disingenuous that it outright makes me mad," Yarber told the JFP.

Yarber ticked off a laundry list of high-priority votes for which the council criticized his office but where, he maintains, the city council is equally responsible for delays.

For example, Yarber points to a proposal in November 2014 to hire Boston-based engineering firm CDM Smith for approximately $700,000 to help prepare a request-for-proposals for the sludge-hauling contract. The council placed the item in committee that month, voting unanimously a month later to approve the agreement; the final RFP then went out March 31 of this year, Yarber said.

Ward 6 Councilman Tyrone Hendrix points out that the council was out of the process once they approved the agreement in December 2014, weeks after they got it. "It didn't have to come back before city council," he said this week.

After the council votes, such agreements go to the city administration for the RFP process. "They select who they want to select," Hendrix said. "... By state law, the council can't have anything to do with the RFP selection process. That's an executive function." So, he said, it was the City that released the RFP on March 31.

"Why hire somebody to redo what was already written?" he asked.

Hendrix added that the administration needs to do a "better job" allowing time for communications with council and "strategically planning" these contracts. "When we wait until the last minute," he said, "we lose our leverage."

In addition to the biosolids deal, the city council also criticized the mayor's office for the timing of a proposal to switch health-care plans for city employees and retirees to UnitedHealthcare from Blue Cross Blue Shield of Mississippi, which administration officials say would save $8.6 million over three years. With the current policies ending Dec. 31 and the changeover taking three months, the city asked council to vote on Oct. 20, 2015, past the deadline for a smooth transition.

Hendrix said the sticking point was council not having enough information.

"We requested the selection committee's selection material and the consultant's report. And we were upset because, when they gave us the agenda item, we didn't have anything but two or three pieces of paper that didn't do anything for us. More importantly, we didn't have the consultant's report of why they chose one company over the other. I still haven't received it. I asked for it again today," Hendrix said Tuesday, Nov. 10.

Marshand Crisler, a top Yarber aide, told media that the process could have been speedier but insisted that the administration had demonstrated sufficient due diligence to allay concerns about the deal. Nonetheless, Ward 1 Councilman Ashby Foote said the late timing of such votes puts members in a difficult spot, though.

"There's a lot of money in these projects, and we seem to get bogged down in things that shouldn't take that much time," Foote said.

Yarber also blames the council for slowing down a proposal to switch banks from Trustmark to BancorpSouth, which the council also held up to get more information, but approved in late December 2014.

Hendrix says it was a $76.5 million bank transaction that the city administration presented to council on Dec. 16, 2014, to consider and approve by Dec. 31, 2014. And, he adds, that trend needs to end. "We're slated to spend about a billion dollars in the next 17 years ... so we have to make sure the citizens have faith and trust in the processes. We have to."

Council members say they are simply fulfilling their responsibilities by asking pointed questions, and several disagree that tabling agenda items or placing them in committee makes them equally responsible for the lagging timetables.

"What we need to do is make sure that all city business is handled in a fashion that's thorough, transparent and accountable," said City Council President Melvin Priester Jr., adding that he did not want to have a back and forth with the mayor about how specific votes went down.

The mayor, though, was adamant that council is equally to blame. "That narrative that's being created, it ain't right," Yarber said. "Now I don't say much, I sit over there and try to be mayoral and not try to deal in the petty stuff, but at some point this mess, it has to stop."

After the Nov. 3 biosolids "no" vote, Yarber continued to speak as Priester instructed the city clerk to continue reading from the agenda.

"The citizens have to trust that everything being done downtown is being done in a standardized manner in a way that will make them proud," Priester later told the Jackson Free Press.

Ward 4 Councilman De'Keither Stamps, who chairs the Budget Committee, said spirited debate is part of running a city, but that it would help if city leaders hashed out issues before the regular meetings. For example, both he and Yarber point to regular Monday briefings that the mayor and members of his administration were having with one or two council members at a time to avoid having a quorum, which would require an open-meeting notice and minutes.

"You could talk and argue and fuss and jump up and down," Stamps said of the informal meetings, which no longer take place. Priester, the current president, said he prefers to handle the people's business out in public instead of in closed-door meetings.

"We are trying to be transparent and, above all, we're trying to be accountable to the citizens," Priester said. "When you don't have a thorough process, that's when you get bitten."

Hendrix also said he stopped attending those meetings, and still hasn't visited the mayor's office, due to respect for the open-meetings law. "I tend to err on the side of caution," he said.

In the coming weeks, the council is likely to face a number of critical votes, including whether to hire a program manager to administer $21 million in 1-percent sales tax funds.

Yarber warned that if he and the council continued to butt heads, citizens would likely hold it against city leaders in the 2017 municipal elections.

Hendrix responded that officials shouldn't be petty, but need to dwell on facts. "I don't think it's healthy for the city or the city's leaders to engage in back-and-forth. The city deserves us to work for them every day, and for that to be on the forefront of our mind," he said.

Read and comment on this and other stories about contract disputes at www.jfp.ms/waste. Email R.L. Nave at [email protected] Additional reporting by Donna Ladd.