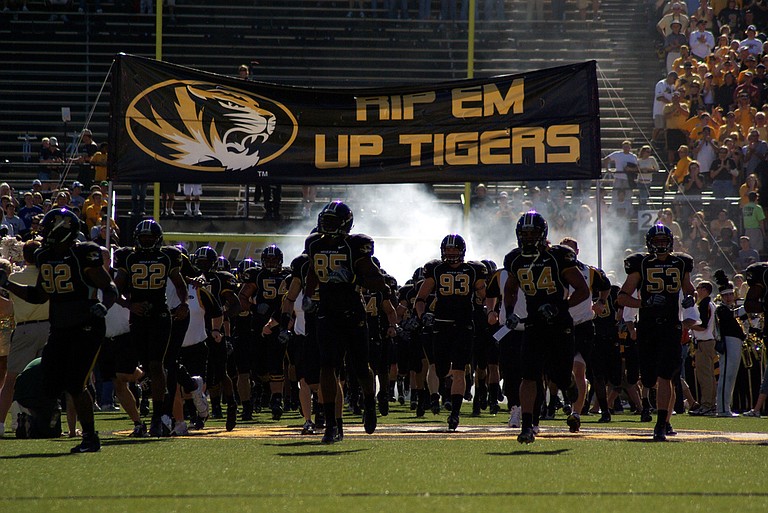 Some black football players at the University of Missouri are joining protests over racist incidents on the Columbia campus. Jim Ross/EAGLE 102 Sports.

COLUMBIA, Mo. (AP) — Student protests over racial incidents on the University of Missouri campus escalated dramatically over the weekend when at least 30 black football players announced they will not participate in team activities until the school's president is removed.

President Tim Wolfe gave no indication he has any intention of stepping down, but agreed in a statement Sunday that "change is needed" and said the university is working to draw up a plan by April to promote diversity and tolerance.

For months, black student groups have complained of racial slurs and other slights on the overwhelmingly white, 35,000-student campus. Tensions flared during the homecoming parade Oct. 10 when black protesters blocked Wolfe's car in an unsuccessful attempt to talk to him.

On Saturday night, black members of the football team joined the outcry.

The athletes did not say explicitly whether they would boycott the team's three remaining games this season. The Tigers' next game is Saturday against BYU at Arrowhead Stadium, the home of the NFL's Kansas City Chiefs, and canceling it could cost the school millions.

Head football coach Gary Pinkel promptly expressed solidarity with the black players on Twitter by posting a picture of the team and coaches locking arms. The tweet read: "The Mizzou Family stands as one. We are united. We are behind our players."

The statement from the football players included a photograph of 32 black men. Among them was Jonathan Butler, a black graduate student who is nearly a week into a hunger strike to call attention to racial problems on campus.

"The athletes of color on the University of Missouri football team truly believe 'Injustice Anywhere is a threat to Justice Everywhere,'" the players said. "We will no longer participate in any football related activities until President Tim Wolfe resigns or is removed due to his negligence toward marginalized students' experience. WE ARE UNITED!!!!!"

The protests at the campus began after the student government president, who is black, said in September that someone in a passing pickup truck hurled a racial slur at him. Several days before the homecoming parade, members of a black student organization said slurs were directed at them.

Some of the protests have been led by an organization called Concerned Student 1950, which gets its name from the year the university accepted its first black student.

It has demanded among other things that Wolfe "acknowledge his white male privilege," that he be removed immediately, and that the school adopt a mandatory racial-awareness program and hire more black faculty and staff.

Already, at Chancellor R. Bowen Loftin's request, the university announced plans to offer diversity training to all new students starting in January, along with faculty and staff.

When members of the 1950 group blocked Wolfe's car during the homecoming parade, Wolfe did not get out. He later explained that he was caught off guard, and he expressed regret for his reaction.

The demonstrators also accused Wolfe's driver of hitting a protester with the car; the university has not commented on the allegation.

On Sunday, Wolfe said most of the 1950 group's demands have already been incorporated in the university's draft plan for promoting tolerance.

"It is clear to all of us that change is needed," he said.

The campus in Columbia is about 120 miles west of Ferguson, the St. Louis suburb where tensions erupted over the shooting death of unarmed black 18-year-old Michael Brown last year by a white police officer.

Two years ago, Pinkel and his team made headlines after defensive end Michael Sam came out as gay. Sam came out to his teammates and coaches before the 2013 season, and they agreed to keep his secret until he was ready to go public.