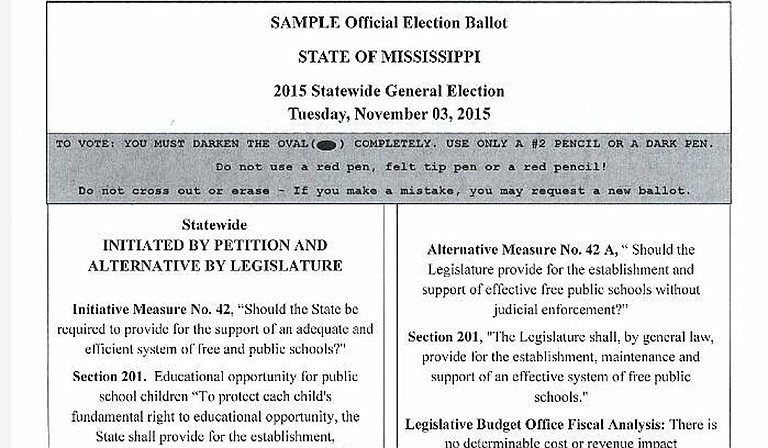 The defeat ended years of work to support a plan to guarantee an "adequate and efficient system of public schools in Mississippi," as voters sided with Republican leaders who opposed judicial oversight of legislative spending decisions.

"Parents and grandparents want to keep decisions over their children's education in the hands of their local school boards and elected officials," said Lt. Gov. Tate Reeves, one of Initiative 42's prime opponents.

The state constitution does not allow for court appeals on legislative spending decisions. Since Mississippi's current school funding formula was adopted, lawmakers have allotted the full amount it demands in only two election years. This year's budget is $200 million short, adding to a shortfall that totals $1.7 billion since 2008.

Backers of the initiative spent more money than had ever been spent on a referendum in Mississippi before, raising more than $3 million. Those contributions were channeled through out-of-state charities, but ultimately most of the money came from the W.K. Kellogg Foundation, former Secretary of State Dick Molpus and former FedEx executive Jim Barksdale.

Opponents raised only $300,000 through October. But the party and GOP officials including Reeves, Gov. Phil Bryant and House Speaker Philip Gunn lined up against the initiative, saying it could give a judge control over much of the state budget.

"This is the greatest transfer of political power in the state's history," Bryant said last month while campaigning against the measure.

Even if voters had approved the initial question on amending the question, Republican lawmakers had placed an alternative question on the ballot that would have called for "effective" schools without the ability to appeal to court. That Alternative 42A created a confusing two-part ballot that required proponents of 42 or 42A to vote yes and then choose one of the options.

Many voters were still motivated to wade through the ballot, though. Ernest Davis, a Tougaloo College student, said he had voted for Initiative 42 because his high school had lacked books and computers.

"When I was in high school, I didn't have everything that was needed," said Davis, who voted at New Hope Baptist Church in north Jackson. "We need stuff that's up to date for kids."

The Republican message of opposition resonated with the majority of Mississippi voters, though, on a day when Republican incumbents won re-election statewide and the GOP made gains in the state House.

"I just don't believe a judge should be able to allocate funds," said Scott Dewberry of Pearl, who said he voted a straight Republican ticket and against Initiative 42 at McLaurin Heights United Methodist Church in Pearl.