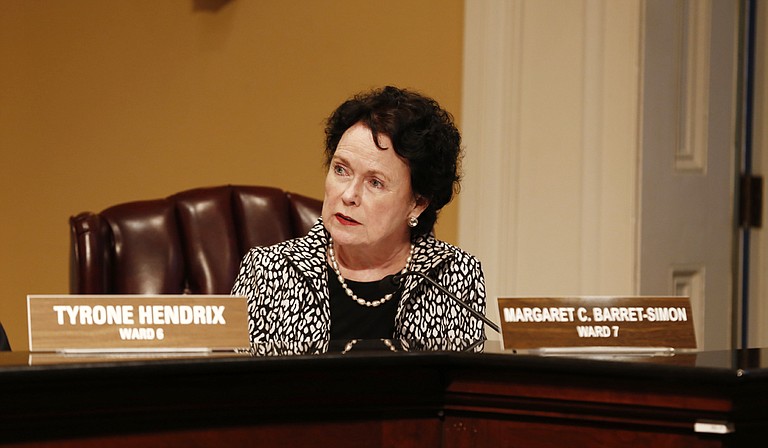 Ward 7 Councilwoman Margaret Barrett-Simon said Siemens has "boots on the ground" in Jackson only because the water-meter installation project has been an "embarrassment" for the company. Photo by Imani Khayyam.

Today, Jerriot Smash, a top deputy to Powell, told the city council's Budget Committee that Siemens' brass has given a lot of attention to clearing up the mistake, including dispatching corporate marketing representatives to Jackson.

Subcontractors for Siemens were about half-way through the swapping out 65,000 residential water meters when Smash found that a gallon meter had been installed; workers eventually found a half-dozen more of the wrong meters. Because the City of Jackson bills water by the cubic foot and, therefore, a gallon meter could send bills skyrocketing more than 600 percent.

The project is part of a $91 million "performance contract" for new, more accurate meters that would, ostensibly, let the city collect more revenue to put toward infrastructure repairs. Since the project began, in the summer of 2013, it has been the subject of a number of customer complaints and some city officials have suggested the City terminate the agreement.

Ward 7 Councilwoman Margaret Barrett-Simon said Siemens has "boots on the ground" in Jackson only because the project has been an "embarrassment" for the company. At least two other Southern cities—McComb, Miss., and Monticello, Ark., have filed lawsuits over similar performance contracts with Siemens.

In other Budget Committee action, members killed a proposal from Ward 3 Councilman Kenneth Stokes to stop paying Siemens until an council-led investigation into the Water and Sewer Business Administration is complete. Earlier this year, consultants working on the City's behalf uncovered that employees of the WSBA, which falls under public works, might have been taking part in fraud, including setting up ghost accounts and, possibly, diverting cash payments.

On May 5, the council voted to retain the firm that made the findings—Raftelis Financial Consultants—to assist with its investigation.

Another Stokes proposal, to lower the requirement for the city's reserve fund to 5 percent, also failed to draw support today. Trivia Jones, the City's director of administration, said that while the state recommends holding 5 percent of revenues in reserves for emergencies, the City passed an ordinance in 2007 to bump it up to 7.5 percent. Stokes wants to lower the cap to free up cash.

Jones advised against the move, saying it would be a disservice to Jackson's bond ratings.

"It sends a horrible message to the rating agencies," that the city might be in financial dire straits. "This may not be the case, but the market responds to the perception."