Stinker Quote(s) of the Week: ‘Good Ole Boy’ Talking Points By You, the Readers 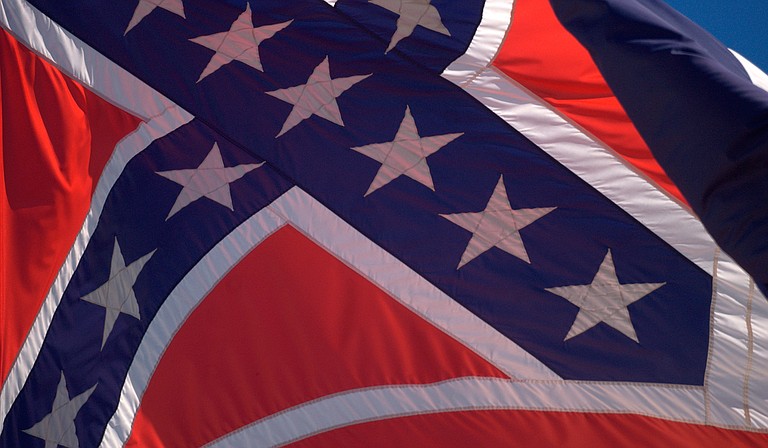 "The battle flag has to be removed from the state flag of Mississippi and from display anywhere other than museums, historical events and cemeteries." Photo courtesy Flickr/Stuart Seeger

During the Confederate flag dust-up of the last two weeks, we've learned that many Americans and Mississippians are no longer buying into romantic myths about why these Confederate states fought the Civil War. (Slavery, as the Declarations of Secession make abundantly clear.)

There are hold-outs, though, and their reasoning can raise the hair on the back of your neck. We asked readers on Facebook to share some of the good-ole-boy/girl reasons they were seeing to keep the Confederate emblem in the Mississippi state flag. Here are some of our, er, favorites, all of them using twisted rationalization and many of them based on outright falsehoods.

• "Mississippi's flag has nothing to do with the hatred of some *sshole towards a certain race. Why change to some liberal crap because a group of people decide everything is racist and we can't offend anyone?"

• "Black people weren't the only slaves."

• "Almost none of the Confederate soldiers were slaveholders."

• "Blacks fought under the Confederacy."

• "Lincoln was a racist so it couldn't have been about slavery."

• "Southerners couldn't afford slaves. The war was over the greedy North trying to take our fields."

• "Just because something offends someone doesn't mean we have to erase our history. Our history unites us. Blacks died for that flag, too."

• "Nobody blames the Africans, they are the ones that sold slaves to the Europeans in the first place."

• "Why punish us because hate groups have misused our fine symbol of southern heritage?"

• "Get out of the South, sir, if you cannot accept her heritage! We don't need your kind that gives in to someone being offended over every little thing we do."

• "Don't listen to outside agitators."

• "The Confederate flag is about heritage. Blacks, Mexicans, Chinese everybody gets to honor their heritage except white people."

• "Slavery ended a long time ago. We don't owe blacks nothing. So if they don't like it, I suggest they move to Chicago or some other place and leave our people alone."

• "Slavery is bad but the descendants of slavery who remained in this country have benefitted from it.

• "Apparently ISIS is recruiting in MS and it's because a bunch of chicken crap idiot liberals want to change the state flag."

• "Looking at your pics, you have a mixed child in your photo, and in your other pics you have black friends. ... Shouldn't you be glad for slavery and the fact that the black people are here? Because without them selling their own people, you wouldn't have your beautiful child nor your black friends."

• "(The flag is a) God-given right of the white man." Look at "their missionary work for the negro."

• "You know if you don't like our governor, our state or our flag, let me know where you are and I will come help you pack and you can move the hell out of our great state."

• "The only thing holding you back is your own ignorance and laziness ... don't blame it on a flag!"

• "I would be careful yankees. Run like your ancesters (sic) did. Hide. Behind something you believe in. The South believes in liberty, life and love. What do the yankees believe in ? Obumer. Hillary. ??? Muslim bs?? Im sure y'all can go back and stop moving to the south to retire and trying to change us."

Add yours at jfp.ms/goodoleboys. Read more on this issue at jfp.ms/slavery.