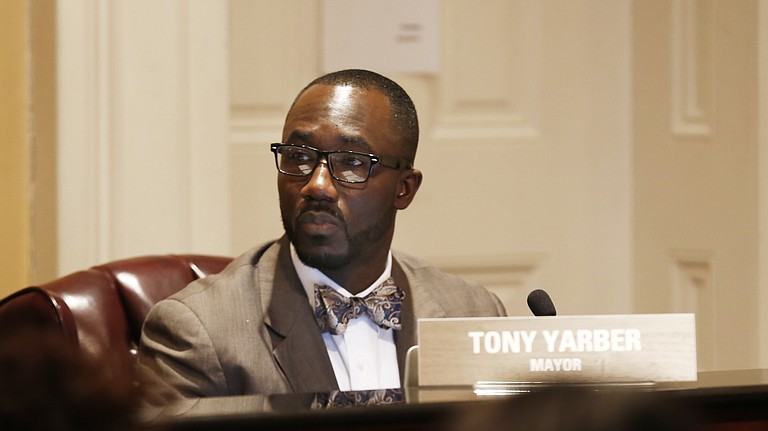 Mayor Tony Yarber proposes to balance a $495 million budget with an 8-percent hike in property taxes and employee furloughs. Photo by Imani Khayyam.

The City of Jackson is going into austerity mode with Mayor Tony Yarber's budget proposal, unveiled this morning at the first of a month's worth of budget talks.

Yarber's budget projects $494.6 million in revenue for the coming fiscal year, which begins Oct. 1, a decrease from last year's adopted budget of $511.4 million.

City officials have already said they were expecting a $15 million budget shortfall.

Already this fiscal year, city revenues are behind expenditures by $3.9 million, Trivia Jones, the city's director of administration, said this morning at a presentation on revenues.

To help fill the gap, the mayor's budget includes an 8-percent hike in property taxes. In addition, starting in October, all full-time City of Jackson employees will be required to take one furlough day per month.

"(That goes) from the mayor on down," city spokeswoman Shelia Byrd told the Jackson Free Press Friday evening.

In a statement to the news media, Byrd said: "We've spent months working on the proposed budget for the next fiscal year. Our budget analysts estimate a revenue deficit of about $15 million so our budget decisions had to be based on reshaping the financial integrity of the city, while preserving jobs. This was not an easy decision. However, we recognize that other municipalities have implemented furloughs as a means of closing budget gaps. We've considered a number of options, and the consensus was to observe the equivalent of a four-hour biweekly furlough."

Exceptions to the furlough include part-time employees who work fewer than 30 hours per week and key police and fire department staff.

"We understand that there have been several factors contributing to our current budget situation. It did not happen overnight. It is the result of declining revenue (and) budget practices that did not ensure viability, such as using the city's cash reserve to balance the budget and adhering to fee policies that do not reflect the economics of the day."

Ward 6 Councilman Tyrone Hendrix said Yarber's administration and the council have talked about a number of options. Byrd said the furloughs would save $4.9 million.

"This is the hardest thing to discuss because it affects the lives of city employees," Hendrix told JFP.

Today, Hendrix applauded the Yarber administration's focus on cleaning up blighted properties and code enforcement as a revenue stream and suggested beefing up those efforts to raise even more revenue.

Yarber seemed reluctant to increase those projections because collecting fees remains a challenge.