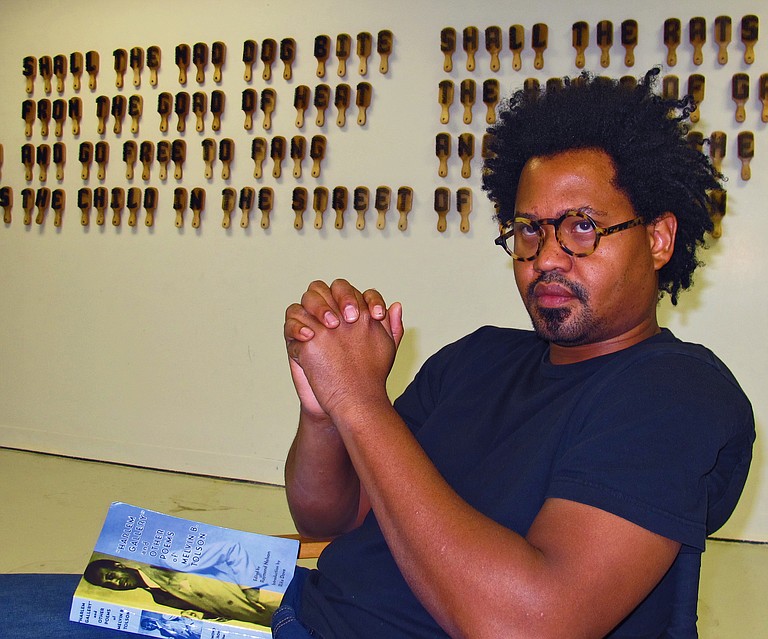 Felandus Thames will have an exhibit at Jackson State University from Sept. 4-Nov. 6.

Speaking with Felandus Thames on the phone is like talking with any parent of young children: filled with interruptions. Thames and his wife, physician Michele Irving-Thames, recently moved their young family to Stamford, Conn., from New York City, where he maintains an art studio. There, his 5-year-old twins, Miles and Megan, chase rabbits in the yard under his watchful eye, and he interjects instructions to "come down from there," or gently admonishes, "No poking. Be nice to each other," then tells them to hug. "Multitasking," he says, chuckling, picking up where we left off.

Jackson native Thames, 40, has taken his talent to national acclaim. He grew up in a creative family. His dad painted, his mom quilted, and he and his brothers all took up musical instruments. "My oldest brother played all brass instruments," Thames says.

"As an artist, you mine other people's work, and you can't help but bring your own life experiences to the work," he says. "Of course, I automatically carry my Mississippi experiences everywhere I go, and that history is just a part of the fabric of our culture."

Thames' work, which ranges from small to wall-sized paintings to dimensional installations, invites viewers to take a deeper, often jarring look at the easy, automatic views of African Americans.

"A lot of the content can be understood as directly referential to black people," he says. "... I'm not saying that my audience is a black audience. In fact, the majority of the people who collect my work are not black."

A ubiquitous theme in Thames' work is satirical pokes at false perceptions of monolithic African American characteristics. "I'm really trying to create something that's more complicated than the traditional notions of the black identity," he says.

Thames channels artist Carrie Mae Weems to challenge "post-black" intellectualism: "Black people have always been complex. We've always flown airplanes. We've always done all of these different things. It's just that it's not talked about."

Conversations about race are complicated and difficult, Thames concedes, but his work is a constant challenge to expand them. His art frequently incorporates ready-made objects as surrogates for people. He letters hairbrushes made for black hair to spell out poetry, and uses children's blocks in near-monotone grays and blacks for the words of historical and contemporary cultural figures—Mark Twain, Richard Pryor, Redd Foxx.

"I'm using something that's familiar, (like) the children's blocks, to invite you in. People assume that it's going to be something extremely light-hearted," Thames says.

"... I'm using humor, in many cases, or poetry, to talk specifically about ownership of the 'n' word, and posing the questions: Should this be a part of our lexicon? Should we have a moratorium on the word? Should it be contextual? And then, who owns the actual word itself? Does it define a person, or does it define specific people or the people who use the word? Or does it define just a class of people?"

The art of early surrealist Hans Bellmer, specifically the twisted, disjointed manikins of "Dolls," had a profound influence on Thames' art. "I looked at his abilities to 'talk' about the traumas of World War I. ... His seeing the tragedies, the mangled bodies, informed his work," Thames says. That exploration expanded Thames' work "into a conversation ... about the black body and how our identity was shaped by traumas of slavery, in a way, and post-slavery."

Provoking questions is the point for Thames. His studio is a laboratory for new investigations with materials and content. He explores one body of work—one question and one perspective—and then moves on, much like other modern artists including Ai Weiwei, Damien Hirst and Jeff Koons.

Felandus Thames' "Stuck Between 'lizabeth Taylor's Toes" opens Sept. 4 at 4 p.m. at JSU's Dolly M.E. Robinson Gallery and runs through Nov. 6. The event is free, as is an artist's talk there from 2-3 p.m. visit felandusthames.com.