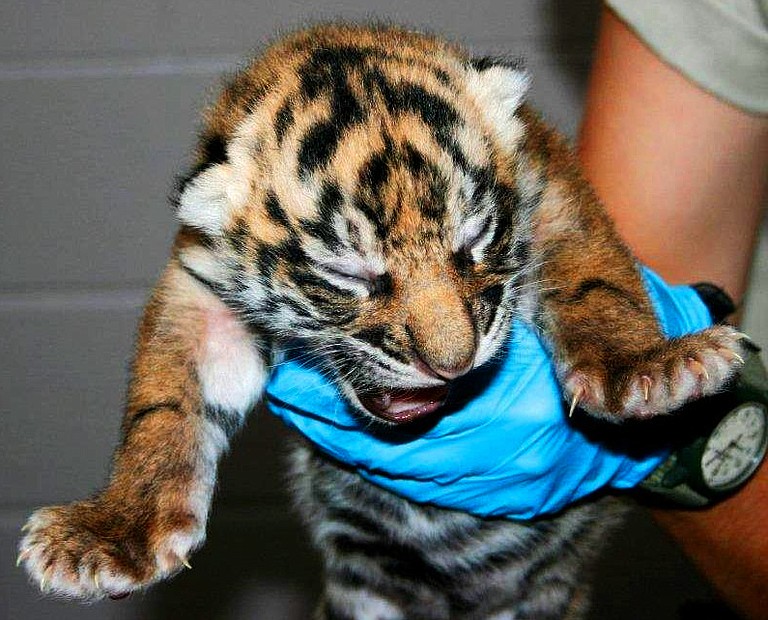 The Jackson State University Tigers have adopted one of their own kind—a Sumatran tiger cub at the Jackson Zoo.

EKO (Indonesian for "first born"), the 100-pound cub, was born in May, and JSU adopted him Nov. 11 in a partnership with the zoo. The tiger will be used in children's exhibits, teaching and marketing with the aim of increasing zoo membership. The university will pay $40,000 each year for three years in the sponsorship.

"This partnership between the Jackson Zoo and Jackson State University is an important milestone in the history of both institutions. For Jackson State, this is proof positive of our embracing our community here as well as another investment in the future leaders of the rest of the 21st century," JSU President Dr. Carolyn Meyers said in a press release.

EKO is literally a rare breed. The World Wildlife Foundation estimates that fewer than 400 Sumatran tigers exist. The animals' home of Sumatra is an island located in western Indonesia, part of the Sunda Islands. It is the largest island in Indonesia and the sixth largest in the world.

The critically endangered Sumatran tigers are the smallest surviving subspecies of tiger, distinguished by thick black stripes on their orange coats. Due to the rarity of the tigers, poaching them is against the law and is punishable by jail time and heavy fines. Regardless of efforts to conserve the species, though, Sumatra still has a market for tiger parts and products, and poaching isn't declining. WWF says the tigers are also losing their prey and habitats quickly.

The tiger's diet consists of deer, cattle, boar and tapir. Though tigers are generally at the top of the food chain, only about one in 10 hunts are successful. To combat this factor, tigers have extra-sensitive ears, a large field of vision, stripes, light pawsteps, muscles and strength to aid in stalking and catching prey.

"Adopting EKO and his habitat affords cross-disciplinary teams of JSU students the opportunity to design and implement learning experiences for the youngest in our community. Our adoption and our enhancement of EKO's habitat will ignite the flame of learning starting with pre-schoolers as well as position JSU in their young minds as the resource for fun learning experiences," Meyers said in the release.

JSU and the zoo are already in the planning stages for projects and academic activities, including installing a "Tiger Cam" and adding special play areas near the exhibit. The zoo will host a JSU Tiger Day and will give special membership rates to JSU students, alumni, employees and families.

"First off, we are neighbors," Beth Poff said of the zoo and JSU in the release. "Secondly, this will benefit the Sumatran tiger breeding program and conservation efforts. And lastly, it will contribute to the well-being of west Jackson."