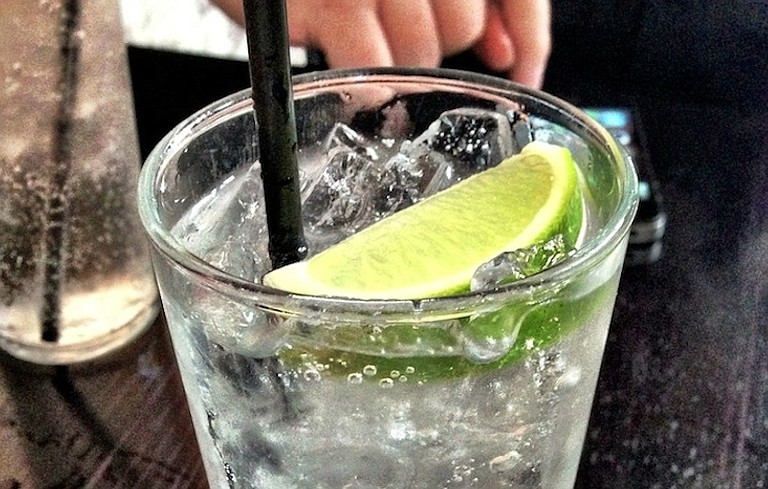 The English gin and house-made tonic, the first drink served at BRAVO!'s recent craft cocktail workshop, was Robertson's plea to give gin a chance. "This isn't the stuff you drank in college," he said. And he was right; Bristow Gin, handcrafted locally at Cathead Distillery, had the juniper undertones of any old gin with a spicy smoothness that was completely unique. The delicate and woody cloves complemented the lemongrass and grapefruit notes that danced through the house-made tonic.

The workshop, which is the first in what the restaurant hopes will be a long series, gave home-bartending enthusiasts a chance to ask questions, try new things and learn to imitate its seasonal cocktails.

BRAVO! (4500 Interstate 55, Suite 244) featured eight drinks from the restaurant's Principante, Intermedio and Veterano menus. The Principante cocktails, filled with fresh fruit juices and honey, were sweeter and weaker, while the Intermedio-level drinks spotlighted the spirit. With complex ingredients and multiple liquors, the Veterano menu is for a more sophisticated palate.

The first cocktail was the Vera Cruz. Robertson married Exotico tequila with pineapple, cranberry and lime juices before adding house-spiced agave steeped in habanero and Serrano peppers. He gave the crowd tips for buying the best tequila, emphasizing the percentage of agave rather than price. Pink and frothy from a hard shake in a tumbler, the cocktail hit the tongue with the tartness of the citrus, but the subtle tingle from the peppers lingered long after the fruit was gone. He served it in a rocks glass and garnished the drink with a couple of leaves from a pineapple's crown, and it was as pleasing to the eye as to the lips.

While we sipped ginger beer to cleanse our taste buds for the next drink, the bartenders began crafting the Caprifoglio, a truly Southern cocktail. Robertson began with Cathead Honeysuckle Vodka, adding lemon juice, honey—with a little warm water to aid in mixing—and pomegranate juice. He shook and double-strained the drink and topped it with sparkling wine. The pink-red liquid filled the martini glass to the brim, and a lemon peel swirled around the rim. The effervescence of the Caprifoglio enticed my palate, reaching my nose before the drink hit the bar. It smelled like summer—full of citrus, honey and wine.

The next drink was the first that isn't original to the restaurant, the Classic South Side, another gin drink. Lime juice and simple syrup enveloped the floral and woody gin. While ripping mint leaves in two, Robertson explained that muddling is unnecessary, and the bitter mint stems should be avoided. Once shaken and strained, he poured the light green drink into a coupe glass, accompanied by a sprig of mint.

Robertson recreated another classic, The Bees' Knees, using London's Beefeater Gin, lemon and the hot water-honey mixture. The simple concoction was reminiscent of lemonade but had a warm earthiness.

"Now, this is a real pirate drink," Robertson explained as he began pouring spirits into a tumbler. With deeply complex Pampero Aniversario Rum from Venezuela and sweet and Velvet Falernum from Barbados, you would think only pirates would be able to gather the ingredients for The Jackdaw. Luckily, you won't have to leave town to enjoy these two specialty spirits with a splash of Exotico tequila and Angostura bitters, an aromatic agent that enhances the flavor of the other ingredients. The crowd was pleasantly surprised that the first spirit-driven cocktail from the Intermedio menu was so smooth. The Velvet Falernum, like liquid cinnamon, tempered the alcohol without overwhelming it.

London Calling is BRAVO!'s version of the popular Pimm's Cup. It includes Pimm's No. 1, Plymouth Gin, Aperol, lemon, honey, tonic and mint. Aperol is an aperitif, or a drink meant to whet the appetite. It originated in Italy and adds a bitter and refreshing citrus kick. The tonic used in this drink isn't house-made, but I suggest substituting it for just a dollar extra. Its counterpart is a digestif, or a drink that aids in digestion. The Veterano cocktail is a tequila drink with 1800 Reposado, white creme de cocao and lemon with a little simple syrup. Some of the tasters had bowed out by this point, but I was up to the challenge. The amber drink was tequila-heavy but the citral and chocolate curbed the heat. Robertson double strained it into a coupe, throwing in a couple of lemon strings.

The strongest and last drink of the tasting, Kenway's Decision, was like a sweet table wine. With Ruby Porto, which gives it its jewel-tone coloring, Flor de Cana Rum, honey and lime, it is a no-frills, intensely flavorful drink. The classy drink is not for the faint of heart—or appetite for strong drinks.

"One reason we do this is because there is this mythos about bartending," Robertson said. "The trick is you find what you like, and you order it."

After shaking and double-straining the cocktail, Robertson flamed an orange peel, caramelizing it, and dropped it into the glass. Most of the crowd hung around to ask questions and find rides home, ordering food and, of course, more cocktails.