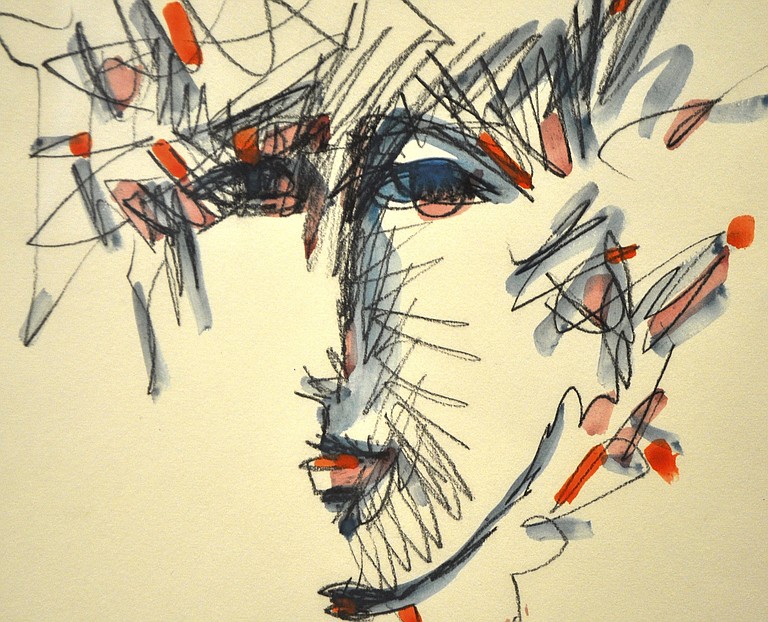 Andrew Bucci is still going strong as an artist at 91 years old. Bucci’s work was chosen recently to for the USA International Ballet Competition’s 2014 poster.

At 92, Mississippi-born artist Andrew Bucci still does what he loves. Bucci received the Mississippi Arts Commission's 2009 Lifetime Achievement Governors Award for Excellence in the Arts and designed the last 5-cent United States Postal Service stamp in 1967, which marked Mississippi's 150 years of statehood. This year, the United States International Ballet Competition, chose his piece "Figure In Green" to feature as the signature image for the organization's 2014 poster and commemorative program.

USA IBC will celebrate its 35th season next year. Since 1990, the competition board has chosen a Mississippi artist to feature on the commemorative poster. When looking to choose an artist, Sue Lobrano, executive director for the competition, saw Bucci's work at Brown's Fine Art Gallery in Jackson. "His work had wonderful colors and movement. It was very celebratory," she said.

Jackson artist Marie Hull is one of Bucci's biggest influences. "She was no nonsense and took art very seriously," Bucci said by phone from his Fort Washington, Md., home. "She was a serious teacher."

Bucci was born Jan. 12, 1922, in Vicksburg and graduated from St. Aloysius High School there in 1938. He earned a bachelor's degree in architectural engineering from Louisiana State University. The air force sent Bucci to meteorology school at New York University, and then he served as a meteorologist in World War II.

He was stationed in London for two years, and after the war, he served at Orly Air Base, which was near Paris, for three to four months. While there, he attended open-sketch classes at the Academie Julian in Paris. Upon his return to U.S. soil, Bucci enrolled at the Art Institute of Chicago, where he received a bachelor's degree in 1951 and a master's degree in 1954. Bucci worked as a meteorologist in Greenville, S.C., for a year before going to the National Meteorological Center in Suitland, Maryland.

During his days as a meteorologist, Bucci continued to paint and often received critiques from Marie Hull in Jackson.

"Marie Hull, who had been a dynamic art force in Mississippi for 30 years by World War II, maintained her curiosity and excitement about the changing face of art," says art historian and author Patti Carr Black of Hull in her book "Art in Mississippi, 1720-1980."

Black further talks about Hull's willingness to mentor artists like Bucci: "Hull wrote a letter on behalf of Andrew Bucci to Nell Davis at the Lauren Rodgers Museum (in Laurel, Miss.) decrying the prevailing desire for art 'that looked like something.' She continued, 'I'm pleased you will show Andrew's things next spring—despite being very far out! I think that at intervals the museum going public should be exposed to such—even tho they do not understand. Without 'advanced' work being shown, the poor befuddled public would be even more un-knowing than it is now! ..."

Bucci said that Hull "made you paint very wet watercolors right away, and many people did not like that because it is difficult. But, that is how she started you out. I used to make lots of figures and she got to put the backgrounds around them and try to relate them." Hull wasn't all no-nonsense, though. "(She) loved chocolate and would keep a dish of M&M's on the table. When I asked who was that for, she said that it was for the mouse," Bucci said. "She was fun, but very serious about art and the art-making process." He remained in contact with Hull until her death in 1980 at age 90.

Humbly, Bucci thinks it is a "fine thing" that his piece was chosen for the cover of the poster and commemorative program for the 2014 USA IBC, but, he says, "I think the graphic artist deserves some credit, She did a fine job." Graphic designer Vidal Blankenstein was responsible for the overall design of the commemorative poster and booklet. Bucci's comment about Blankenstein is a fitting tribute from a man who clearly understands the power of highlighting the work of aspiring artists, just as Marie Hull did for him. "The secret of success is to keep doing it, even if nobody likes it. If you keep doing it, people will say, 'well, there must be something to it, he spends all this time doing it," he said.

Read more about the USA IBC in the Spring Arts Preview issue.

*This piece has been edited to reflect corrections in the story. Jackson Free Press reported that Andrew Bucci was stationed in London after World War II. He was actually stationed in the city during the war. We also reported that Orly Air Base was in southern France, but the base was near Paris. Bucci was a meteorologist in Greenville, S.C., not Greenville, Miss., and when the story ran, Bucci was 92, not 91. Jackson Free Press apologizes for these errors.