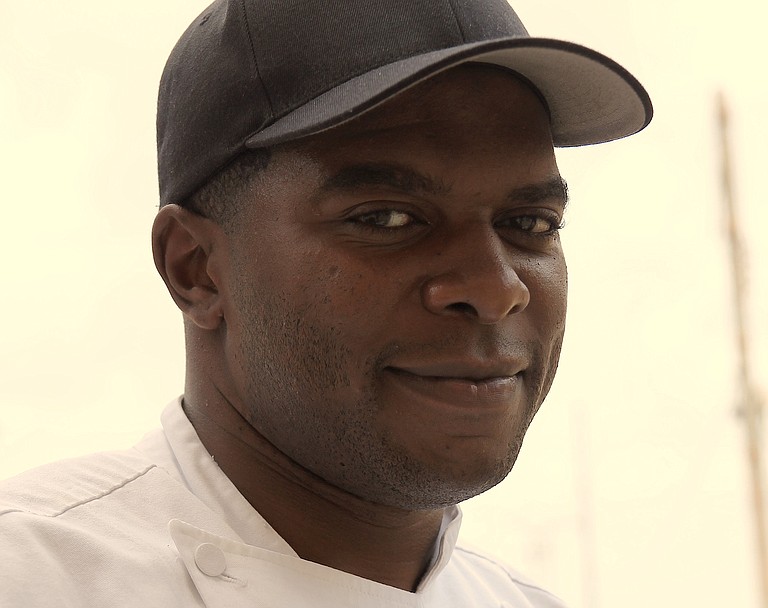 Chef Nick Wallace makes a pit stop at BRAVO! for a preview dinner before heading to New York City for his James Beard House dinner. Photo by Melanie Boyd.

It's not every chef who manages to score a gig cooking dinner at the famed James Beard House without even owning a restaurant, but Chef Nick Wallace has achieved just that by following the advice of his peers and changing up traditional flavors.

Wallace attended the James Beard Foundation's Chefs Boot Camp for Policy and Change in September, with chefs from all over the country. While there, members of the foundation asked him, "When do you want to host the dinner?"

In return, Wallace asked, "What dinner?" His own dinner at the James Beard House, they told him. The foundation gave Wallace free rein in designing his meal. Since his favorite time of year is between Thanksgiving and Christmas, he planned a winter menu to cook in New York City Dec. 14.

Wallace was also instrumental in getting the James Beard Foundation to plan a conference, or "salon" in Mississippi for the first time, which will happen next year.

Before he makes his way to New York City for his dinner, Wallace is giving Jackson a treat: cooking his James Beard menu at BRAVO! Italian Restaurant and Bar Dec. 2. I spoke with the chef by telephone to discuss his background, favorite recipes and his future plans.

You say your mother and your nana inspired you to cook. What are some of your favorite recipes of theirs?

My favorite recipes would probably be onion chips, from the hull of the onion that people throw in the garbage. (Nana) would dehydrate them and make little chips with it. Another one would be the bacon and onion bread my mother makes.

What food trend are you tired of seeing?

Everything could be done differently, though. And that's one great thing about being a chef: You can create those things and go be different.

What food trend are you really excited about?

Incorporating a lot of different cultures. I can't really stick to one because I'm a big fan of French and southern and Italian foods. And, a lot of people are incorporating Thai and Asian accents to things.

I'm a big fan of John Besh in Louisiana; (he) does some great things. I took a trip to Louisiana and ate at La Provence, (which) is like a picture-perfect restaurant, the kind I can see for myself but with my twist and my ideas. (After) reading his cookbooks and seeing the passion of his food and where he took his family, too—just to walk into his restaurant and feel it and live it was a story within itself.

Who was the most memorable person you've ever served in a restaurant?

I was working for Morgan Freeman many years back in Madidi (Restaurant) in Clarksdale. ... The thought that would always cross my mind was, "What if he walks in? Are you ready for it? What if he walks in?" And one Saturday they were like, "Mr. Freeman is out front," and I was like, "Holy. Shit." ... So I cooked for him—I think I did sweetbreads and some other things ... It was awesome. I came out (afterward). He said he enjoyed the meal and called me one of the best, and I appreciate that.

What would you want to eat for your last meal?

Bolognese with at least four meats and homemade spaghetti.

What are your future plans as a chef? You've talked about opening a restaurant.

I definitely want to touch on that, only there's things I can't say right now. But I do want to say that, yes, in my upcoming future as a chef, that is my main target: opening up a restaurant. Just be looking out for the unique name.

Chef Nick Wallace's Preview Dinner is at BRAVO! Italian Restaurant and Bar (4500 Interstate 55 Frontage Road, Suite 244, 601-982-8111) Monday, Dec. 2, at 6 p.m. BRAVO! chef and owner Dan Blumenthal, Campbell's Bakery owner Mitchell Moore and sommelier Grady Griffin will collaborate on the meal. See the full menu at jfp.ms/WallaceNYCdinner. Tickets are $80 per person with an optional wine flight for an additional cost, and seating is limited. Email [email protected] or call 601-982-8111 to make a reservation.