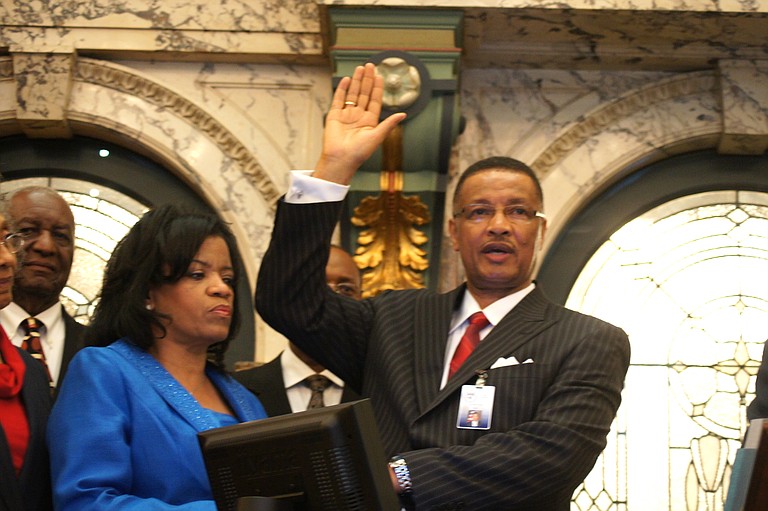 Sollie Norwood (right), with wife, Joan, looking on, is sworn in as Jackson’s newest state senator. Photo by R.L. Nave.

Five Mississippi prisons are already privately run, but Adams County could be the first in the state to turn operations of its county jail over to a private firm.

House Bill 1688, sponsored by Rep. Robert Johnson, D-Natchez, would authorize Adams County to contract with Corrections Corporation of America, one of the nation's largest prison management corporations, to house its inmates.

Adams County officials say they are looking into how much it would cost taxpayers to build a new jail versus hiring CCA, which already runs a federal facility in Natchez. Darryl Grennell, president of the Adams County's Board of Supervisors, told the Jackson Free Press that the county wants legislation just in case it decides to go with CCA.

"CCA has the staff, transportation, kitchen and other things that are needed to run a jail. This could save us a lot of money because we wouldn't have to worry about that stuff," Lazarus said. "Our current jail is aging and is in need of repair. Building a new jail would cost anywhere from $8 million to $10 million. Contracting with CCA would be a cheaper route for us right now."

Built in 1974, Adams County's jail can house between 74 and 80 inmates per day. If CCA takes over management of the jail, the company could build a new facility with a capacity of 200, Lazarus said.

Lazarus seems unfazed by the safety record of the CCA-run Adams County Correctional Center, which primarily houses immigrant detainees for the federal Bureau of Prisons, and was the site of a tense prison riot last summer. Inmates accused CCA employees of mistreatment and held dozens of staff members hostage. The prisoners beat one guard, Catlin Carithers, to death.

"That stuff happens everywhere in any type of prison," he said. "It just happened in Hinds County."

The Raymond Detention Center, which the Hinds County Sheriff's Office, runs was also the scene of a riot last year. Hinds County officials have also discussed building a new jail as well as contracting with a private firm to run the detention center.

Several pieces of legislation that would benefit the capital city area remain alive, if only barely. A law passed in 2009 would have allowed the city of Jackson to ask citizens to raise money through a referendum, but Jackson officials did not like the provisions dictating the makeup of a required oversight committee.

A number of bills introduced during the current session would have given cities the option of levying a 1-percent sales tax to pay for infrastructure projects if a two-thirds of citizens approve the plan. Two of these bills--Senate Bill 2145 and HB 523, both of which would have opened the possibility of levying local-option sales taxes to municipalities statewide--died in committee last week.

Rep. Edward Blackmon, D-Canton, opted not to send the bill to the House floor for a vote. Though Blackmon supported the intent of the bill, it simply didn't have enough support, he said.

Jackson's final hope could rest in HB 546, which would restructure the oversight committee to allow Jackson more discretion on how to spend the revenue collected from the tax. The bill was assigned to the Senate Finance Committee as of Tuesday's deadline to pass bills originating in the opposite chamber out of committee.

For the first time in what seems like forever, the Hinds County delegation to the Mississippi Senate as well as the Democratic caucus is at full strength.

Norwood, who takes his seat with two-thirds of the legislative session over, said he wants to hold a listening tour to hear constituent concerns, work on Medicaid expansion as well as ways to attract new businesses and promote existing small businesses in the district.

CCA has hoodwinked other counties into buying into its scams.

They always cost hugely more than they're expected to. They abound in problems.

If any commissioner votes to go ahead with this scheme without check the experience of the few county jails that CCA has actually run, they deserve to be recalled. Look up the messes that CCA made at Hernando County, Florida and Tulsa, Oklahoma.

Endless escapes, homicides, rising costs, perilously deferred maintenance and most of all, hiring staff that had worse criminal records than the offenders the counties had sent there.

You could look it up!

Im with you pancho. Private prisons/CCA is a detriment to our society. its all about money, look what happened at Walnut Grove, although i don't think that was CCA, Maybe GEO??? ITS BIG BUSINESS, someone is winning and it isn't our Youth. SEEMS like i read CCA made 675 Mil for shareholders....... SAVE OUR YOUTH, Black, White, Asian. I know I missed the timing on this one. but

They might as well. Nothing was done by the state or Adams County when the officer was killed last year in their county. Might as well let the same crooks run your county jail as well...

PHONE calls are outrageously priced for calls home and people wonder why they keep smuggling phones into prisons. THESE guys need SOME contact with home especially as some cannot afford or have a decent car to visit loved ones. LIKE i said its all about money. YES, some phones may be used for ill will but I imagine most of them are jsut trying to stay in contact with family at a decent price.