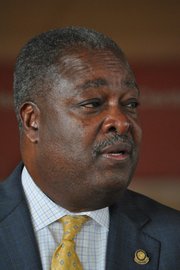 What Jackson Mayor Harvey Johnson Jr. wants to see from the state Legislature hasn’t changed much in the past year.

The city’s top two agenda items for the 2013 legislative session are the same as they were in 2012: Remove the language requiring a state oversight committee from the local-option sales-tax law and get seven-figure financial help from the state to repair the Woodrow Wilson Avenue bridge over Mill Street.

In 2009, then-Gov. Haley Barbour signed Senate Bill 3268 into law, which allows 60 percent of voters in municipalities to approve a 1-percent local sales tax for certain purposes, including infrastructure improvements, public safety, and loans or grants for large-scale economic development projects. The tax would not apply to some purchases, including food and medicine.

How a municipality spends that money, however, is not up to its local government or voters.

In the law, legislators included a commission that would decide where the money from the sales tax gets spent. Of the nine commissioners, the governor and lieutenant governor each appoint one, and the speaker of the House of Representatives appoints a non-voting member. The city’s mayor appoints two residents of his or her choice and four members “representing the business community” from a list of eight nominees from the local chamber of commerce.

That commission is where Johnson and the state have not been able to see eye-to-eye. He believes the city of Jackson, as well as any other city, should be able to spend the money however it chooses. The revenue could equal as much as $15 million a year in the capital city.

“It should be up to elected officials to decide on how public dollars are expended,” Johnson said at a press briefing on the subject. “We take exception to this commission being placed there in the legislation.”

Last year, three Democratic representatives from Jackson: James Evans, Credel Calhoun, and Alyce Clarke authored House Bill 168, which would have removed the commission from the law. The bill passed by more than a two-thirds majority in both the House and Senate, but later died in conference.

Edward Blackmon, D.-Canton, is the chairman of the House Municipalities Committee. He blamed politics for killing HB 168 last year after both the House and Senate passed it.

“I think the more the local officials get involved in pushing it, the more likely it is to (pass),” Blackmon told the JFP.

Complying with a U.S. Environmental Protection Agency consent decree with an estimated price tag of $400 million over 20 years is looming, giving the city the biggest reason for a local option sales tax it has ever had. If voters approve the tax for the EPA-required water and sewer improvements, though, Johnson fears the commission could decide to spend the funds elsewhere.

That’s why, for the second year in a row, getting legislators to remove the commission from the law is No. 1 on Johnson’s legislative agenda.

Johnson maintains his focus on infrastructure with his second-highest priority, as well. The Woodrow Wilson Avenue bridge that crosses over Mill Street and the train yard is in need of repair, Johnson said, and the city can’t afford the needed work. To fund just the basic repairs, the city needs the legislature to approve at least $2 million in state funding for the bridge.

“We received some money from the U.S. Department of Transportation, about $1 million, to plan and design the repairs for that bridge, but that’s not enough money,” Johnson said.

Woodrow Wilson Avenue is a heavily trafficked thoroughfare. The bridge repairs are even more important because the city has plans for the avenue to serve as the city’s medical corridor.

The consequences of not funding the repairs could be serious, Johnson said, not only for Jackson, but for all north-south railroad transportation in this area of the country.

The last point on the city’s legislative agenda, for now, is the revitalization of the Highway 80 corridor. The city has already invested in the area by moving six city departments into Metrocenter Mall, building a new public transportation headquarters on Highway 80 and rezoning much of the surrounding area.

Now the city is hoping the state will offer incentives to business owners and developers to bring commerce back to the area that was once the city’s retail center.