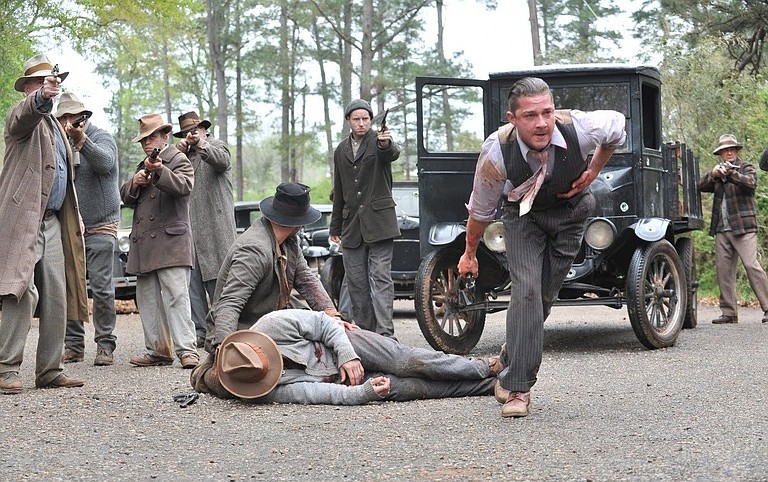 Shia LeBeouf, who plays moonshiner Jack Bondurant (foreground), is part of an all-star cast in &#x0022;Lawless,&#x0022; a film with a loose Mississippi connection. Courtesy The Weinstein Co.

I received a call on my cell phone when I was cabbing through some now-forgotten city for a deposition. The caller was Tom Bondurant, whom I know from early mornings at 16-WAPT. Tom's not a big talker, so words count with him. He asked simply, "Are you reviewing 'Lawless'?" The trailer looked promising, but this call was weeks before the opening. I replied definitively with a "maybe." That's when Tom told me that the movie was about his father's side of the family and based on a book written by Matt Bondurant, a distant relative.

A rough-and-tumble gangster flick with a loose Mississippi connection piqued my curiosity. Also, when the Weinstein brothers back a film with a cast that includes Shia LeBeouf, Tom Hardy, Jason Clarke, Gary Oldman, Jessica Chastain and Guy Pearce, moviegoers might expect a few razor-sharp edges that could cut up this year's limping-along cinematic landscape.

You are forewarned that bootlegging is not for sissies; it's a messy business, with lots of blood spilled from slashed necks and dissections of uniquely male anatomy. This Mountain Bootleggers versus Chicago Gangsters epic is about guts, gore and survival among lawbreakers.

Set in Franklin County, Va., during prohibition (known variously as the Moonshine Capital or the wettest county in the world), the movie distills the usual historical facts. The county sheriff (Bill Camp) and his men enjoy the bounty of their fair region by not being heavy handed with their constituents. They chug the booze. They accept protection fees from the local moonshiners. Moonshiners are rugged men—folk heroes among the destitute—beating the system.

Unchecked by law enforcement, illegal stills pop up everywhere in the Blue Ridge Mountain foothills, until they're lit up at night like Christmas. The county gets rich, and people are drunk and happy. It would be a fairy-tale ending except for the infiltration of city thugs seeking their piece of the profits and the feds trying to enforce the U.S. Constitution.

The movie, directed by John Hillcoat ("The Road"), romanticizes the Bondurant brothers. Forrest (Hardy), the oldest, believes that nothing can kill them. He survived World War I when no one in his unit came home alive; he's invincible and a legend. Howard (Clarke), the middle brother, successfully fought off the Spanish flu, which killed nearly everyone else who had it. But Jack (LeBeouf), the youngest, doesn't fit the mold. He's the kitchen lap dog, who needs lots of protecting.

The opening scene establishes the relationship among the brothers. Little Jack can't pull the trigger to kill a pig for dinner. The older boys get the job done, and that's the family way until Special Deputy Charley Rakes (Pearce) poaches on their territory.

Jack gets into the action like a frisky puppy that doesn't know boundaries. He's endearing, although all of the brothers have a powerful pull.

The beautiful Jessica Chastain sexes up the film. She's the girl who's been there and done that and wants a more peaceful life than flapping feathers around in a Chicago strip club. In contrast, the preacher's daughter Bertha (Mia Wasikowska) represents the virtuous soul in pilgrim dress. Jack, smitten by Bertha, swaggers and preens to win her affection. "Is that what you call courting," she asks him. When he's not running from Bertha's dad, Jack makes moonshine with his best friend Cricket (Dane DeHaan), a frail boy man.

"Lawless" gives us a secure basis for identification with Jack. He's the most emotionally accessible of the brothers, and LeBeouf's performance is exquisitely nuanced. The audience knows up front that Jack and his brothers are guilty of their crimes, but these guys are still more innocent than the corrupt politicians and the slick gangsters. In a private battle between urban sharpsters with machine guns and scrappy mountain men with knives and brass knuckles, we align ourselves with the underdogs. And then there's the nostalgia for the thirties—the tokens of poverty, the dreary rural settings and folks scrabbling through a hard life. All that combined make it easy to root for the Bondurant boys.