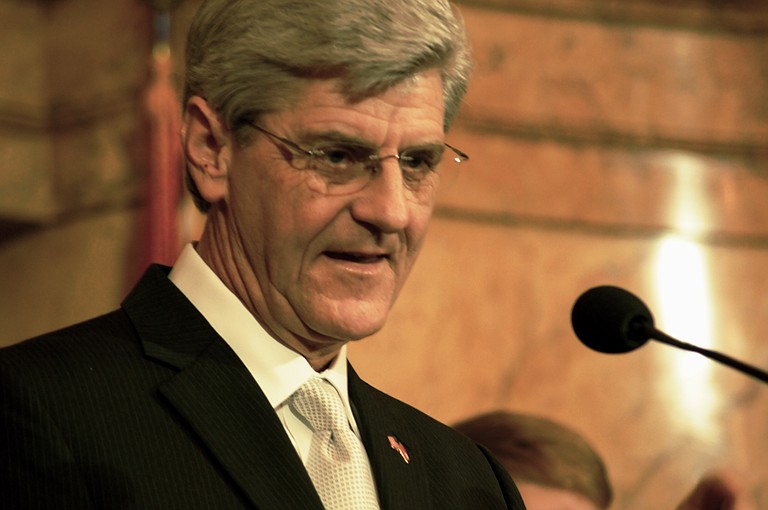 Gov. Phil Bryant would like to commoditize health care in the state. Photo by R.L. Nave.

It's no secret that when it comes to the health of Mississippians, we rank at or near the bottom of nearly every well-being marker, from obesity to infant mortality. It's logical to think that those statistics would put the state in an ideal position to take advantage of the booming health-care industry, but an Oct. 26 report makes the opposite argument

"When businesses are making investment decisions, the health of the workforce is a factor," states the report, commissioned by the Mississippi Economic Council. "The population must be healthier and have better access to care in order to be competitive in capturing private-sector investment."

With MEC's focus as the state's chamber of commerce, the presentation zoomed in on health care as an industry.

"(The report) is a real good look at how we seize this opportunity, how we seize the opportunity to hook in to what is the fastest-growing segment of the American economy ... bringing in more pharmaceutical operations, more distribution, more shared services, more support for existing health-care entities and a broadening of our health-care footprint," said Blake Wilson, MEC president, in his opening remarks.

The gathering, part of a one-day, three-city tour, featured Gov. Phil Bryant who called on the MEC to conduct the study during his inaugural address in January.

"This will be an effort unlike anything in the nation; a comprehensive action plan to provide health care as an industry of necessity," Bryant said then.

Repeating the "industry of necessity" meme Friday, Bryant said that the state should build health care like any industry.

"I believe the Legislature's going to join us next year and help us with a bond bill to finish that off," Bryant said. The grant represents about 16 percent of the $62.6 million UMMC officials say it will cost to construct a new medical-school building, the Associated Press reported Friday.

The goal of the study was create a roadmap to the "dynamic economy" Bryant referenced, which benefits to Mississippians would include healthy, productive citizens, a better quality of life, and sustainable business and economic wealth.

In the Magnolia State, however, the barriers to that prosperity are substantial, beginning with the health of her people and the lack of health-care access to many, especially in the state's rural areas. The report's authors repeat that poor health of Mississippians--with high rates of childhood and adult obesity, diabetes, heart-disease mortality and cancer--as a weakness several times.

The authors take a cautious approach to achieving improvements. "Mississippi needs more and better-paying jobs that provide insurance coverage," they write. "The population needs to be educated on lifestyle changes to improve health."

Caution is warranted given the state's political atmosphere. Bryant, a Republican, has stated that he will not accept federal funds to expand Medicaid, and the state Legislature has only fully funded the Mississippi Adequate Education Program (which provides additional, leveling funds for poorer school systems) for two of the last 10 years, and the Legislature is considering dropping it altogether.

In a state where nearly a quarter of its citizens have incomes below the federal poverty level, Medicaid represents the only access to health care for nearly 600,000 people, including more than 350,000 children. The ACA, dubbed Obamacare, would raise the eligible income-levels for the program to 133 percent of FPL, providing coverage for an up to 400,000 additional low-income Mississippians. The federal government would pick up 100 percent of the expansion costs for three years and decrease to 90 percent thereafter when implemented fully.

The authors of the MEC Blueprint report agree with experts on health policy: Access to care would go a long way to improving health outcomes in the state.

"We think there's no quicker way to realize the goals of that report than expanding Medicaid," Sivak said.