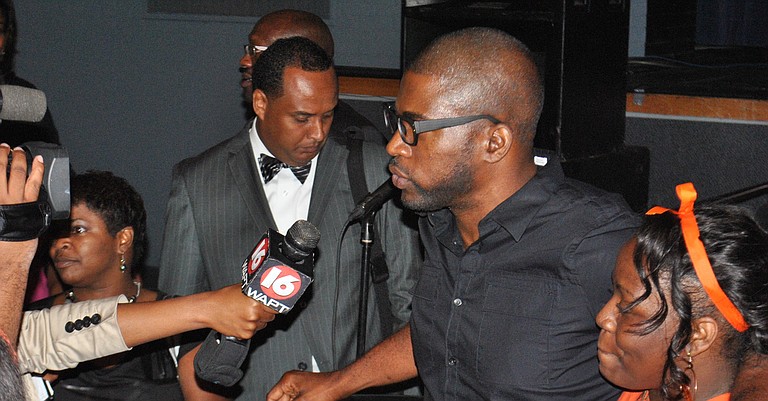 David Banner stands with a student of Jackson State University at the "Words I Never Said: Moving a Hip Hop agenda in 2012" event. Courtesy Darnell Jackson

Words I Never Said: Moving a Hip-Hop Agenda in 2012, was part of a nationwide tour for the organization Rap Sessions, which works to engage locals in politics and issues important to young people.

During the event, which lasted about two hours, David Banner, one of Mississippi's mainstream hip-hop artists, was one of five panelists speaking about pressing issues faced by the hip-hop generation, many of whom will vote for the first time in the November general election. Hip-hop artist Jasiri X moderated.

Panelist Rosa Clemente, a journalist, hip-hop activist and 2008 vice-presidential candidate for the Green party (she's also working toward her doctorate at the University of Massachusetts), passionately encouraged youth to see themselves as change makers and to learn leadership.

"I always enjoy having the opportunity to speak on women's rights," Clemente said. "There was a lot of love in the room."

For the last six years, Rap Sessions has been touring the nation and visiting colleges with leading hip-hop activists, scholars and artists engaging community dialogues. For more information visit rapsessions.org, and be sure to visit the photo gallery at jfp.ms/rapsessions later this afternoon.