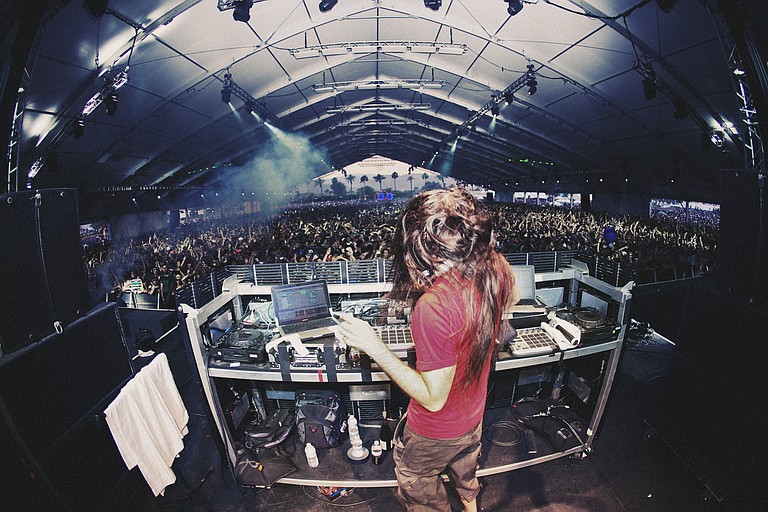 When Lorin Ashton entered college, he wanted to teach U.S. history and be a guidance counselor. Eventually, he decided that he wanted to make a larger impact on the world than he could in an office setting. He never intended to be a professional musician, but he met Perry Farrell of Jane’s Addiction, who asked him to help produce a new record. Then things exploded, and he played Madonna’s birthday party in Los Angeles.

Ashton, 34, now is the force called Bassnectar. Ashton released his first album, “Freakbeat for the Beatfreaks,” in 2001 and now is one of the most-respected electronic dance musicians in America. As part of his new fall tour, Bassnectar will perform in Jackson for the first time Oct. 8 at the Jackson Convention Complex.

Tell me about the EP you’re working on.

I was working on it last winter as well when I put out “Vava Voom.” I could only put so much on “Vava Voom,” and I kept working through the spring. I’ve got like 25 songs right now, and I have to choose five that I’m going to put out and mess with all the details.

Actually one of my favorite parts of making music is when the songs are all pretty much finished, and you just go through every microsecond and make a little tweak here and a little suction noise there and an explosion sound there.

Did you say you have 25 songs right now?

I always have close to 100 songs in progress—like collaborations with people, remixes with people, reworking old material, starting up new ideas. … I move from song to song when I’m working. Yeah, right now I have about 20 or 25 done for the fall tour, and then I’m picking five for the EP. And then I’m going to make a freestyle mixtape that’s just like a live set where it flows from one song to the next. We’re going to give that away for free.

How do you prepare for your live shows?

The day of the show I might start off with this kind of style, this kind of vibe, and I’ll go for five minutes. Then I’ll go into this routine for 10 minutes, then that one which is five and that one which is 15. And then inside of each routine are all these options where I could do this version of the song or that version of the song and make it sound like this. Or take the chords from this song and mix it over the beat from that song and just blend it all up. It’s really good for me now because basically it was a lot of preparation a couple years ago when I was building all the templates in Ableton Live, the computer program I use, and now it’s just kind of like free-for-all mayhem. It just flows really naturally, so I can have a lot of fun up there.

The word I would probably use would be freestyle. It could encompass anything. So it might be this, it might be that. You might expect it to do this and it never is or it will be again it always is. Not being harnessed by people’s expectations, not being harnessed by what other people are doing, but not doing it in an insensitive way. Definitely I perform at shows to delight people, and I’m not there for myself.

Do you still call your music omnitempo maximalism?

I do, and another word for that would be freestyle. Omnitempo means that the rhythm of the song is moving at any or all speeds. It’s just free whereas most DJ sets are locked into tempos. Maximalism kind of means like if you’re making soup you put everything in it, not just three ingredients. So kind of like combining everything into one limitless combination where no rules apply. I made up that phrase, omnitempo maximalism, as a joke probably about 10 years ago, but it literally does make sense, but freestyle is a good term.

What do you listen to the most?

I don’t sit around and listen to music. In fact, I can’t remember the last time that I did. I collect records like an obsessed lunatic. I collect almost every sound that comes out and fast-forward and skim through it to find pieces that I like, kind of like a collage artist. If you ever make a collage for art school or something, you go through different magazines looking for any image you like and you cut it out then you put them all in a big box. So then you have this box of images. That’s project one; it’s like aggregating content.

And project two is sitting there putting an actual piece together. You might take an eyeball, a butterfly and a dolphin and put them in a convertible car then have the car on a wave, then have the wave shooting from Saturn. ... Really, a DJ can be like that. I’m also a producer, so I make things from scratch.