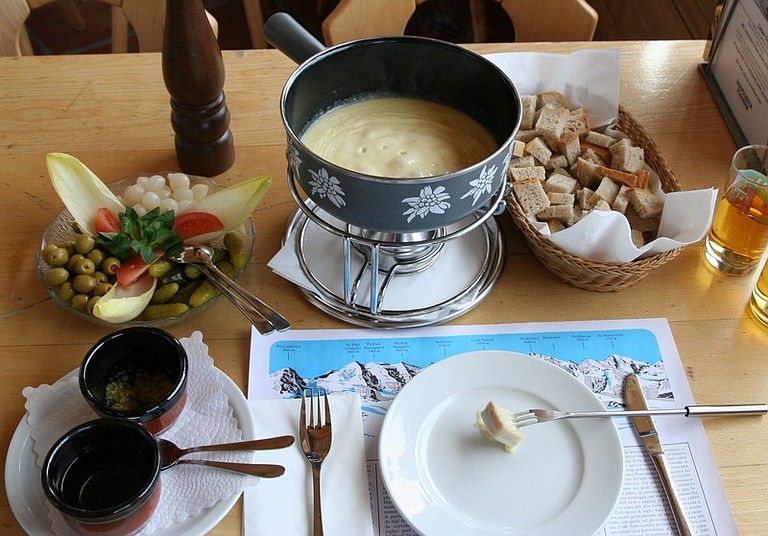 For the past five days, I’ve been laid out by the worst head cold I’ve had this century, so the vision of fondue—yellow, viscous cheese bubbling in an avocado-colored pot—feels familiar yet unappetizing.

But back in the ’60s and ’70s, bay-bee, fondue was fab, like macrame and key clubs. Fondue had an aura: Cookbooks from that era—such as “Fondue Is In,” “Dip Dunk and Be Merry,” “A Treasury of Flavorful Fondues”—depicted fondue parties as swinging affairs that took place in dark-paneled ski lodges. These culinary free-for-alls were decorated with hirsute men dressed in cable-knit sweaters, a two-tined fork in one hand and a fireplace poker in the other—you know, to keep the embers burning.

Meanwhile, svelte women in wrap-around dresses sang along to “Dancing in the Moonlight” on the reel-to-reel, swigging Riunite red and daintily dabbing their bread in a communal pot of cheese or, for dessert, a strawberry in melted chocolate.

However, the history of fondue is not that sexy. Invented by the Swiss in the 18th century, fondue (it is derived from “fondre,” the French word for “melt”) was what passed for food when no fresh fruits or vegetables were available in the winter.

Fonduebits.com, seemingly the authority on fondue, shares that villagers discovered that heating stale cheese made it edible and that hard bread softened when dipped into it. Since they didn’t have enough utensils, everyone had to eat out of one pot.

Modern fondue sets accommodate six—additional people apparently present a fire hazard—and consist of the slender, color-coded forks so that everyone know which is his or hers; an earthenware or ceramic pot for cheese or chocolate (hot oil requires a copper or enameled iron pot); and a burner unit that is fueled by gel, alcohol or butane. You can also use candles or an electric unit, but an open flame is ill-advised and a cord is cumbersome.

You’ll need plates for the dippables: cubed bread, apple slices, asparagus spears, ham cubes and the like. And wine, lots of wine.

Fondue has its own arbitrary etiquette.

No offense, friends, but I don’t know where your teeth have been.

Alternately, bread and cheese fondue can be eaten similarly to meat fondue, which is served with a dinner fork and a fondue fork. The meat is skewered with a fondue fork, placed on a plate and eaten with the dinner fork.

Failure to adhere to these social mores can result in your being ostracized, diseased and permanently uninvited.

Fonduebits.com lists this traditional cheese fondue. Full disclosure: I had planned to try it, but I can neither smell nor taste, so I didn’t. Proceed at your own risk, particularly if you’re lactose-sensitive.

Pepper and nutmeg to taste

Don’t add water to the fondue. Add wine if the fondue is too thick; more cornstarch and cheese if it’s too thin.

The hard crust on the bottom of the pot is called “la courte” and is considered a delicacy. Serve it to your guests.

Don’t double the recipe. Two pounds of cheese is a lot to melt. Make a separate pot.

More holiday and entertaining tips are at jfp.ms/holiday.