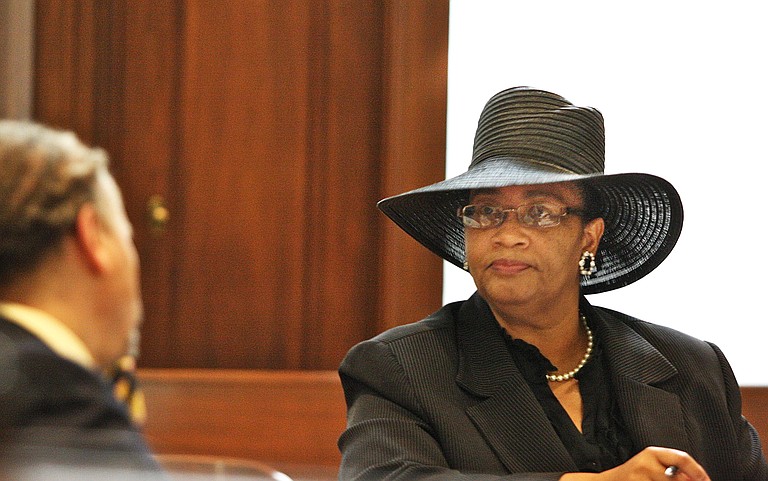 LaRita Stokes was elected Ward 3 councilwoman in a special election early in 2012, then had her election overturned for voting irregularities in the summer. Photo by Jacob Fuller.

JACKSON — The official numbers are in for the Ward 3 runoff election between LaRita Stokes and Joyce Jackson, but there is a discrepancy between the vote totals and the number of voters who signed the roll at Precinct 11.

No one at the city or county seems to know anything about it, and everyone wants to direct questions to another department.

The precinct, located in the Jackson Medical Mall, reported only 33 total votes, according to the official numbers from the Hinds County Election Commission. When this reporter and JFP intern Aaron Cooper stopped by the precinct around 2:30 p.m. on Election Day, though, 67 voters had already signed the roll.

Joyce Jackson said Tuesday night that one of her poll watchers saw more than 100 voter signatures at the Precinct 11 around the polls’ 7 p.m. closing time. Cooper-Stokes defeated Jackson by 163 votes.

“Don’t come in here and open up a can of worms,” Wallace said after hearing the report.

Cochran said that if not all the votes were officially counted, it probably means the city election commission workers did not download all the voting machines correctly.

The voting machines and bags of precinct supplies were in the basement hall of the Hinds County Court House on Pascagoula Street, outside the county election commission office. Wallace looked in the Precinct 11 bag for the voter-roll sheets, but they weren’t there. Cochran said the city election workers must have taken them to City Hall.

Jackson City Clerk Brenda Pree said the city election commission would have the voter rolls if they were in City Hall. She said no one was in the election commission office, though, because they finished their job by verifying the results Wednesday.

She said if someone wanted to know about any differences in official results and voter rolls, they would have to ask one of the city election commission workers: Beryl P. Williams, Della Cooper or Linda Sanders.

When asked about the discrepancy, Williams said she had not looked at the number of people who signed the roll. When asked who was supposed to compare voter-roll numbers to election totals, Williams said the election had been certified and she had nothing else to tell me. When I asked the question again, Williams answer was only slightly more telling.

“It didn’t come up for there to be...(trailed off) Well, anyway, I don’t know anything about the people that signed the voter rolls, about their numbers or whatever,” Williams said. “Nothing came up as a question when we were certifying, and we certified, and it’s a done deal.”

Williams said City Clerk Pree has voter rolls now. When I told Williams that Pree had sent me to her, she said she thinks the voter rolls are in the city clerk’s vault.

“I think there’s somehow, and I’m making this up, you can challenge and the other (candidate) gets to challenge, and we can meet you down there, and you can look for as long as you want to,” Williams said.

Williams said to challenge, the candidate would need to call the secretary of state’s office.

When I called the city attorney’s office, the attorney who answered the phone said I would need to talk to Deputy City Attorney James Anderson, who was out of the office. I left my phone number for him to call me back this afternoon.

a difference of possibly 70+ votes? Lawdy Lawdy...... and how would this have been certified, if indeed 67 voters had signed the books and only 33 were counted.

We don't know. And we find it infinitely disturbing that no one in a position of election seems able to answer these questions and take responsibility. It doesn't add up, literally and figuratively.

One hopes for more from a public official than Grace Wallace's comment that the JFP shouldn't open up a can of worms. So the manager of the Election Commission doesn't want to answer questions about a highly contested election with a history of shenanigans? There's an easy solution. She can quit.

To Grace Wallace's credit, I think her comment was more of an extended "Oh, no. Not Again," than it was her actually telling me not to open a can of worms. Maybe not the best choice of words, though.

More proof that election fraud doesn't happen with voters at the polls it happens in the counting of those votes. The Stokes and their people have had free reign, protect and control for way too long it is time for them to go.