No Contract for Ward 3 Re-do 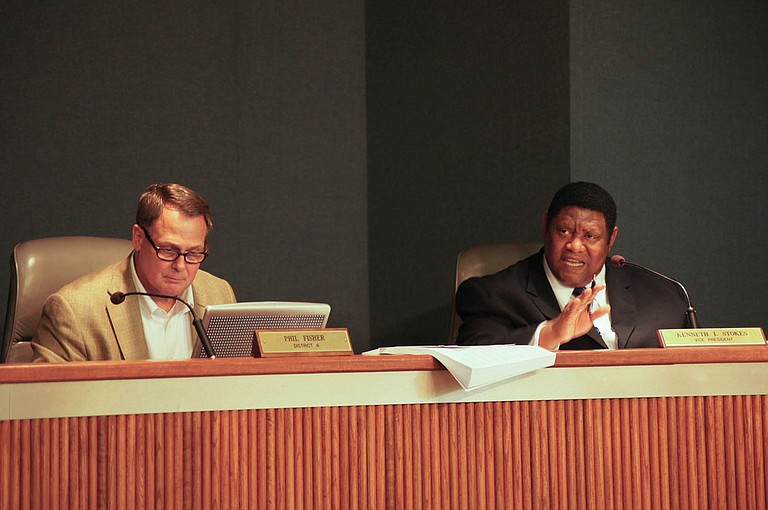 Hinds Supervisor Kenny Stokes (right) wants to save the Capital City Classic. Supervisor Phil Fisher is on the left. . Photo by R.L. Nave.

District 5 Supervisor Kenneth Stokes, who represented Ward 3 on the city council until this year, recused himself from voting on the matter. Stokes' wife, LaRita Cooper-Stokes, is one of the candidates for his old seat. She faces Joyce Jackson. In June, a jury threw out the results of the first election, held Feb. 28. Jackson disputed the legitimacy of Stokes' victory, claiming polling place improprieties. The jury agreed and called for a new election.

Because the contract to run the city's election has not been finalized, Clark asked supervisors to authorize board president Robert Graham to approve the contract when he receives it. District 4 Phil Fisher seemed nervous about the fact that supervisors would not have an opportunity to meet again and review the agreement before the election takes place July 24.

Graham assured supervisors he would consult with board attorney Crystal Wise Martin before he signed the agreement to ensure its legality.

"This election is so contentious, and so interesting, I want to make sure we don't contribute to it," Graham said.

This morning, supervisors also approved a resolution to keep the Capital City Classic in Jackson. Alcorn State University officials announced recently that the annual football game between Alcorn and Jackson State University would take place in Lorman instead of at Veteran's Memorial Stadium.

Stokes, who drafted the motion, said a resolution from the county board could spur civic leaders to be more proactive in keeping the classic in the capital city. "If it was Ole Miss and Mississippi State, the business community would be doing more, and they need to do more to save this game," Stokes said.

Why can't the Capital City Classic alternate like the Egg Bowl? Of course, it would have to change its name, but it seems like that would be more fair to fans of both teams.