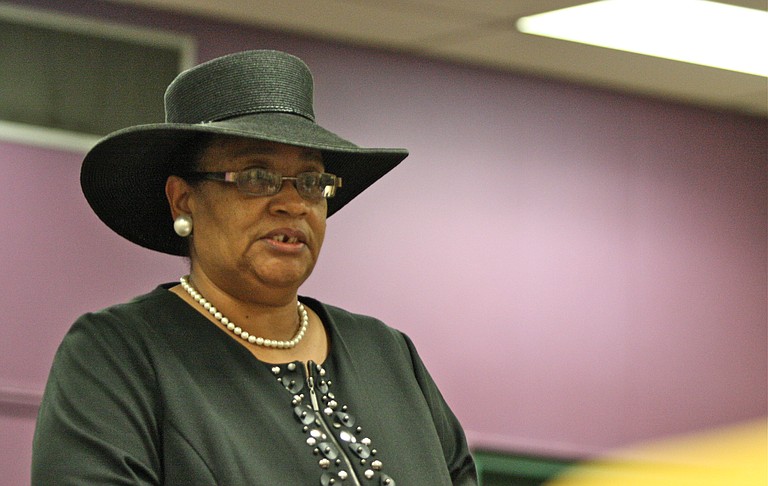 Ward 3 Councilwoman LaRita Cooper-Stokes said at a community meeting Thursday that the will of the people is for her to win the July 24 election and not continue to tie up the proceedings in court. Photo by Jacob Fuller.

LaRita Cooper-Stokes is less than two weeks away from her third election for Ward 3 councilwoman in less than six months.

Until voters go to the polls again July 24, though, she is still on the Jackson City Council, and her focus remains on the job and on her ward.

That focus was clear Thursday night at the Medgar Evers Boulevard Library, where she held a Ward 3 community meeting. She spoke to a gathering of about a dozen citizens about her priorities for the city. Her concerns included helping Jackson once again get its own jail, reenacting the city curfew for minors, redistricting efforts and getting yet another street honorarily named for yet another church pastor.

Cooper-Stokes said Jackson needs its own jail. Currently, officials hold arrested Jacksonians in the county jail in Raymond. The jail is often full, and the county is looking for more jail space for inmates. Cooper-Stokes, along with her husband, Hinds County Supervisor Kenneth Stokes, said because most of the inmates come from Jackson, the city should bear a large portion of the burden of a new jail.

Building a new jail would likely cost well into seven-digit figures. Stokes has a clear advantage in trying to get such an expensive proposal before the city, having his wife on the City Council. He could lose that advantage come July 24, though.

Joyce Jackson will once again get a chance to defeat Cooper-Stokes at the polls that day. In June, a jury unanimously found in favor of Jackson, who challenged the legality of Cooper-Stokes victory in the run-off election between the two. Witnesses for Jackson told the court about illegal campaigning within 150 feet of the polls, unsolicited voter coaching and help by poll workers, and even a racial slur from one poll manager aimed at Jackson.

Cooper-Stokes' attorneys are still looking into appealing the ruling with the state Supreme Court. The councilwoman said Thursday, though, that she would rather get the ordeal over with at the polls.

"I believe that the will of the people is that we go ahead and run this race, and go ahead and get it over with," Cooper-Stokes said after the community meeting.

City curfew was a priority for Kenneth Stokes when he held the seat of Ward 3 councilman, prior to his election to the Board of Supervisors. Cooper-Stokes has brought the discussion back before City Hall. She wants the curfew--once enforced in the city, but no longer an active ordinance--back in effect by the start of the school year.

The problem with the curfew, Mayor Harvey Johnson Jr. said at the Council's regular meeting Tuesday, is finding a place to hold minors who violate the curfew. The city once held curfew violators in the jail with other criminals, but Johnson said the city could lose federal funding if they began doing that again.

Cooper-Stokes said the kids should be in school during school hours. She said she will look to the new Jackson Public Schools administration for answers.

"My thought was to contact the new superintendent (Cedrick Gray) of Jackson Public Schools and see if he may have a building that's available, because the school system has a lot of property here in Jackson," Cooper-Stokes said. "I believe that they could help us to come up with a location. I don't believe that (Gray has) been consulted, yet."

D.L. Johnson Consultants is leading the city's redistricting efforts. Cooper-Stokes said she has been consulting him on a remapping of Ward 3 she has been working on. She said she is not fully pleased with her current map, but it is close.

The 2000 and 2010 Censuses showed that Ward 3 lost about 3,000 residents during the 10-year span. Cooper-Stokes said to make up for the loss, the boundaries of Ward 3 will have to expand. She said the obvious move for the Ward is south, where the population has grown in past decade. She said her mother-in-law, Josie Stokes, recently pointed out to her where the 3,000 Ward 3 residents went.

"They died," Cooper-Stokes said. "And I thought about that. I said, 'She is absolutely right.' When you look up and down your street, I know we looked up and down our street, we have lost so many of our neighbors in the past 10 years. We are the core of Jackson. We are the inner city. Therefore, we are older in our neighborhoods."

At the meeting, Cooper-Stokes pointed out that she honored Rev. P.J. Williams at the Council's meeting Tuesday. She also talked about her ordinance, currently in committee, to honorarily rename a street after Rev. Emmett C. Burns.

Honoring pastors of community churches has been a regular occurrence at City Council meetings, both by Cooper-Stokes and formerly by Stokes. Cooper-Stokes said that churches are a vital part of Jackson communities, and she believes honoring the leaders is important. She scoffed when this reporter brought up criticism that honoring pastors was a political move to get votes from the pastors' congregations.

"That's silly. I actually attend most of the churches that I'm honoring the pastors in. So I know them personally. It's not a political thing," Cooper-Stokes said. "I try to attend as many churches as I possibly can."

I'd rather for Mrs. Stokes to put her efforts for a new jail be put towards economic development and crime prevention, both which could go a long way in reducing crime.

What is the capacity of the city jail downtown and the county jail across the street? Does this city really need another jail like we need another Dollar General??

At least, Dollar General do provide jobs and brings some revenue to the city. Jails don't.

I bet the contract goes to her nephew!

I think the City of Jackson can use a city jail. This would put jobs in the city. Plus, all jails receive federal dollars. The county farm is a in a mess. no secure locks. lots of safety issues. probably a lot of abuse.

I believe the city should have its own jail. More room for the crooks who rob the Dollar General.