What's the Deal with Google+? 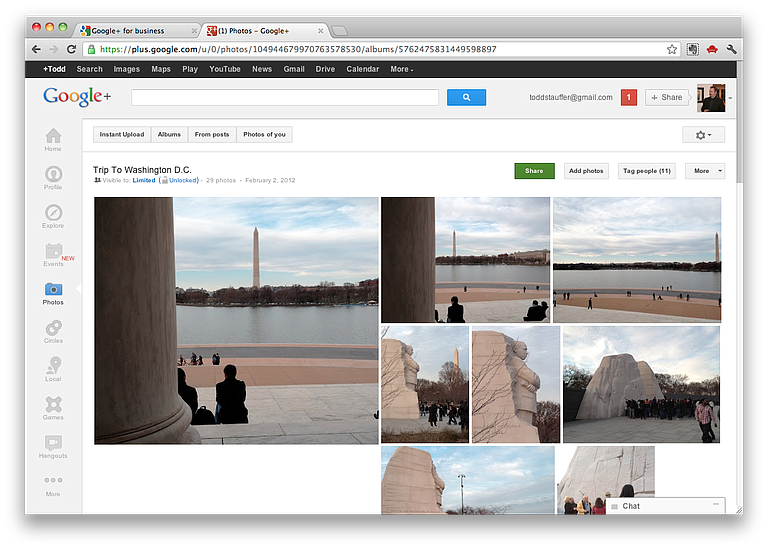 With tools based on Picasa, Google+ is great for managing uploaded photos. Todd Stauffer

So you feel comfortable on Facebook, you're Tweeting on a fairly regular basis, and you've dabbled on Linked­In. Or you're like me, and you like LinkedIn more for its professional content and groups, Twitter for fun and Facebook when you're dragged screaming to the site. Or you're a Twitter-holic, a Foursquare fiend, and you could take or leave Facebook.

After all, it takes all kinds.

What most of us probably didn't see coming—and might still not be sure if we care—is yet another social-media site cropping up, trying to win over our time and effort by making us fit yet another network into our ecosystem.

For Google+, the question on many people's minds—if they think of Google+ at all—is "Why should I spend time on Google+?" And for many people, they haven't gotten a good enough answer.

Google+ is somewhat distinct from Facebook and LinkedIn (but similar to Twitter or Tumblr) in that it's an "open" social network; you don't have to sign into a service to see people's public profiles. This is one reason why it's important to pay at least some attention to it, particularly for business managers or professionals—it's free marketing for you and another opportunity to take a little ownership of your online image.

The second reason builds on the first—this is Google's social network. Which means your profile is extremely discoverable (and is given special weight) by the world's most popular search engine. So if you're not there—and you want to be "discoverable" in Google's universe—you may be missing out.

Judged purely as a social network, Google+ has pluses and minuses. Google+ is built on the idea that you can easily place your "friends" into different Circles, which allow you to be more granular about who you're interacting with. Friends, Family, Acquaintances and Following are the defaults, but you can add anything you want like Castle Watch Friends or Football Buddies or Frat Brothers. You can then send items just to those groups, if you like, including updates and photo galleries, so that you're sharing your personal stuff with the right people and not the world at large.

Google+ also has some pretty strong photo management features, in part because its photo tools are based on Picasa, Google's photo sharing service that's been around for a while (and is now being rolled into Google+). With Picasa, you get Mac and PC applications for managing and editing photos on your machine, which you can then sync to the Google+ service; there's also Chrome, iOS and Android apps that work with Google+ photos as well.

Here's one particularly cool feature: On an iPhone or Android phone, you can get Google+ to upload any photo you take with the regular camera app to a private album on the Google+ service, making it easy to add some of those photos to updates in Google+; it also makes it a little easier to share those photos with other services, because they're already online. They are also backed up in case you lose the phone, a big bonus these days.

Of course, Circles are central to the experience on Google+; for instance, you can quickly change the view in your Stream of posts by clicking one of the buttons at the top of the stream to filter it to just one of your Circles—family, friends or a custom circle. That can be nice if you're trying to drill down and see what's going on with a certain group of folks.

You may already be hearing about Hangouts, where you can get one of your circles together for a video chat, including the ability to view slides and share documents. If you need that, then Google+ is a good option. (In fact, Google+ circles are a nice alternative for managing interactions with a group of people that uses the service for private conversations, instead of relying on Google Groups or the groups tools I've discussed in previous columns.)

In my opinion, the Stream doesn't offer enough customization—posts are just too big in the stream, reminding you that Twitter is a whole lot easier to use as a "public" social network where you can see what's on a lot of people's minds quickly. (Suddenly the 140 characters make a lot of sense.) The other problem with Google+ is that a lot of people you know aren't on the service, so updates can be a little few and far between.

Is it worth it? If you already live in a Google world (you already use Gmail or Picasa or Blogger or Google Groups) then it makes total sense to flip over to Google+ and set up your profile. Likewise, if you run a business, you should check out Google+ for Businesses (google.com/+/business/) and get your page up and running; it'll be good for search engine optimization, particularly in Google's search.

For the rest of us? If you think of Google+ as yet another social network, you'll probably want to pass, at least for now. It's still not that social—some call it a ghost town. But, if you think of it as your social profile on Google, then it might make more sense if you want to be "searchable and discoverable."

If that's the case, check Google+ out.