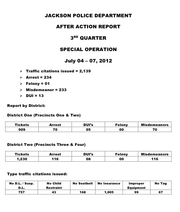 JACKSON — The Jackson Police Department just released a statement showing the results of a special operation last week that it dubbed "Operation Firecracker." Officers issued 2,139 traffic citations, arrested 234 (including one felony), charged 233 with misdemeanors and issued DUIs to 13. Flip through a PDF of the report to the left. The department issued 43 citations to people who did not have child restraints on their children. See the PDF for the full after-action report.